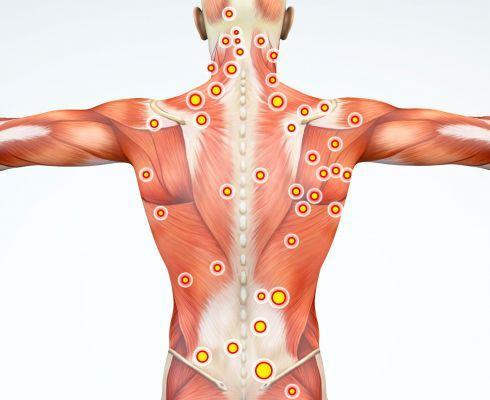 3) The cylinder placed anteriorly inside the deep fascia, called visceral or splanchnic fascia, is a fascial column that forms the mediastinum, extending from the mouth to the anus through various portions with similar structure and embryology. Some researchers consider this fascia to be one with the deep one.

4) The posterior cylinder, contained in the deep fascia and placed behind the visceral fascia, represents the meningeal fascia which encloses the entire central nervous system.
Removing the occipital bone leads to the dura mater, the upper starting point of the meningeal fascia which extends down to approx. the XNUMXnd sacral vertebra via the dural sac (containing arachnoid, pia mater, spinal cord, sacral cord, spinal spinal roots, nerves of the cauda equina and cerebrospinal fluid). The meningeal fascia has a protective and nourishing function of the central nervous system.
The connective fascia and muscles constitute, anatomically and functionally, the myofascial system, assuming a fundamental role within the balance and posture system. It is in fact the myofascial tissue that represents the largest sensory organ of our organism, it is from it that the central nervous system receives mostly afferent (sensory) nerves. The presence of mechanoreceptors, capable of causing local and general effects, was abundantly found in the fascia up to the visceral ligaments and in the cephalic and spinal dura mater (dural sac). What needs to be considered is that in the muscular innervation of the human cybernetic system the sensory fibers arise only for approx. 25% from the well-known Golgi, Ruffini, Pacini and Paciniform receptors (type I and II fibers) while all the remaining part originates from the "interstitial receptors" (type III and IV fibers). These small receptors, which mostly originate as free nerve endings, as well as being the most numerous in our body are ubiquitous (their maximum concentration is in the periosteum) and therefore are present both in the muscular interstices and in the fascia. About 90% of them are demienized (type IV) while the rest have a thin myelin sheath (type III).


The "interstitial" receptors have a slower action than the type I and II receptors and in the past they were mostly considered nociceptors, thermo and chemoreceptors. In reality, many of them are multimodal and most of them are mechanoreceptors that can be divided into two subgroups, based on their activation threshold through pressure stimuli: low-treshold (LTP) and high-treshold pressure (HTP) - Mitchell & Schmidt, 1977. activation, in certain pathological states of interstitial receptors sensitive to both painful and mechanical stimuli (mostly HTP) can generate painful syndromes in the absence of classic nerve irritations (eg root compression) - Chaitow & DeLany, 2000.
This sensory network, in addition to having an afferent sensing function of the positioning and movement of the body segments, influences, by means of intimate connections, the autonomic nervous system regarding functions, such as the regulation of blood pressure, heartbeat and breathing, by tuning them , very precisely, to local tissue needs. The activation of the interstitial mechanoreceptors acts on the autonomic nervous system causing it to vary the local pressure of arterioles and capillaries present in the fascia, thus influencing the passage of plasma from the vessels to the extracellular matrix thus varying the local viscosity (Kruger, 1987). Furthermore, the stimulation of the interstitial receptors, as well as that of the Ruffini receptors, is able to increase the vagal tone by generating global changes at the neuromuscular, cortical and endocrine and emotional levels concerning a profound and beneficial relaxation (Schleip, 2003).

Other articles on 'Myofascial Connective System and DOMS'

add a comment of Myofascial connective system and DOMS