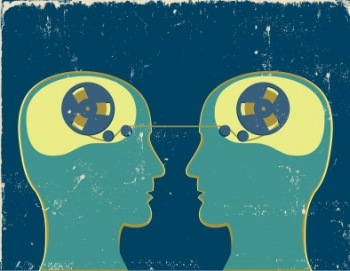 The definition "Mimic language" refers,
roughly, our ability to express what we feel through
gestures. However, in addition to conscious mimic language (the one we use
to make us understand by people who do not speak our language) there is also a
mimic language that manifests itself automatically and that is expressed, however
example, when we see a person in pain and imitate his gestures of
pain unconsciously or when we see someone cheerful and our face reflects
a smile.

A study developed by
German psychologists from the University of Nijmegen, attempted to dig
deeply into the reasons why we tend to unconsciously imitate
the gestures of others. To do this, 62 participants were shown one
series of photos of human faces. Each image could only be observed for one
tenth of a second. After observing each of the
pictures, participants had to hold a button to indicate whether the face
showed a positive or negative emotion. However, half of the participants
he had to avoid facial expressions through a little trick, tighten the
teeth (as this makes it difficult for us to imitate). The other one
half simply had to control the movement of their shoulders (something
which would have made it easier for him to express facial expressions). Researchers
they simply measured how fast each person's response had been
participant. So they found that women who
they were free to imitate facial expressions they were much quicker than
men in recognizing emotions. On the contrary, in the group he could not
realize the facial expressions, the men did not manifest a
particular slowdown but women do. These findings come to
confirm other studies in which it was already hypothesized that our brain has
a kind of "direct access" to process emotions. This quick way
it would simply consist in imitating what the other is feeling, in a way
such that our brain quickly becomes aware of this information
that we are reflecting it on ourselves. In fact, some research has
proved that when we see a person suffering and imitate the expressions
of suffering, those areas are activated immediately in our brain
related to pain processing. Women would use with
more frequent this direct access than men, reason for the
which the speed in recognizing emotions is not conditioned in the
men when you "cut" or prevent the use of this direct access.
Of course, these findings also corroborate the idea that women are more
sensitive than men (although it would be more correct to say that
respond sensitively with greater speed) and show a level of
much greater empathy.
The Police State - Does It Really Make Us Feel Safer? ❯

add a comment of Mimic language: how does it help us to understand the other?