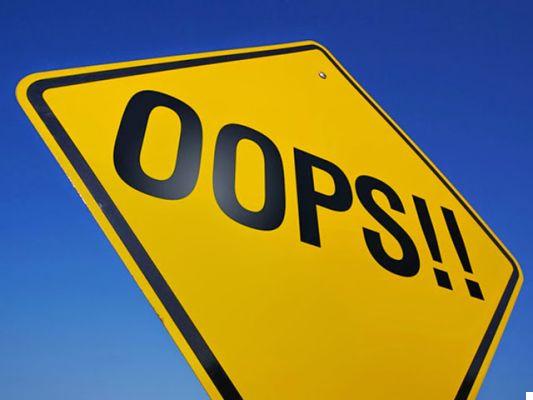 Many people are obsessed with trying not to make mistakes, especially in public. We are ashamed of stumbling or making mistakes when speaking in public. The desire to avoid making mistakes is so intense that it sometimes becomes an obsession. The person focuses so much on preventing mistakes that, over time, his behavior is affected to such an extent that those close to him may confuse this uncertainty with a distant, cold or even snobbish attitude.

But in reality, making a mistake in front of others makes us more attractive and human, and makes us considered more likeable. Because? Only because others in this way perceive us as someone more similar to them and feel a deep empathy towards us. In psychology this is known as the "Pratfall Effect".

Being perfect does not increase sympathy towards us

It all began in 1966 when a group of psychologists at the University of Minnesota recruited several students for an experiment. They were told to listen to a tape of an alleged College Bowl competitor (even though it was actually an actor). The recording consisted of an interview in which very difficult questions were asked. In one case, the competitor responded as a very competent person, giving 92% correct answers, but in the other cases he was shown to be a mediocre person; giving only 30% correct answers.

After listening to the recording, the students had to report how nice the contestants were. Thus, the psychologists could see that when the competent competitor finally got it wrong, his sympathy increased. But this effect was not evident when mediocre competitors failed.

Of course, similar experiments have been repeated over the years and the researchers have obtained equally similar results, also discovering that the Pratfall Effect is stronger in men than in women and that it is not as pronounced when the person making the comparison has a high level. of self-esteem.

The explanation lies in self-esteem and our tendency to compare. Basically, people who believe they are perfect negatively judge our performance when they compare themselves to us. By being losers, we tend to feel less empathy for each other. However, when these people make a mistake the comparison balances and our self-esteem no longer feels threatened.

Therefore, the other automatically becomes a person closer to us, we will identify with him and consider him more likeable. This is also a little trick that can be put into practice by those who tend to have performances always close to perfection, so they can tune in better with others and relieve that pressure that comes from always doing things flawlessly.

This effect does not only apply to interpersonal relationships, but also to marketing. In fact, it is usually thought that if a salesperson points out the shortcomings of the product they intend to sell, they are committing suicide professionally. However, a study conducted at Stanford University indicates that this is not always the case.

In that case, the psychologists chose to sell chocolate bars. Some were in perfect condition, while others were broken and the defect was clearly visible, as they were wrapped in clear plastic wrap. The researchers offered all the bars at the same discount and, when they were broken, they pointed this out.

Thus, they found that when people were immersed in a certain task, for example, when they were worried about an exam they would take shortly or when they were having a conversation with someone, they sold twice as many broken bars as those in good condition, even if they both had the same price. Therefore, in certain circumstances, a defect does not adversely affect the sale, quite the contrary.

Audio Video Pratfall Effect: When we make a mistake, we are more likeable
Email: the dark side ❯

add a comment of Pratfall Effect: When we make a mistake, we are more likeable