What you don't see with your eyes, don't invent it with your mouth 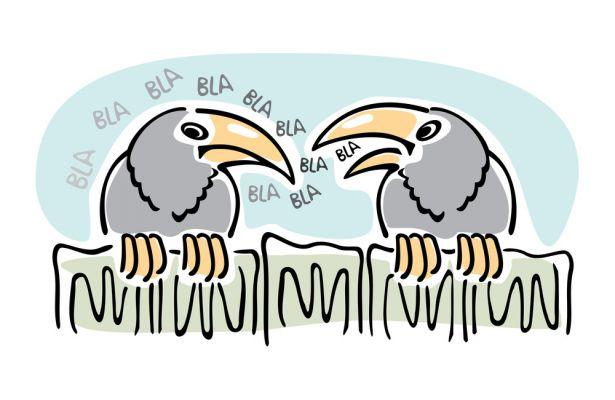 Some people make the mistake of making up with their mouth what they haven't seen with their eyes. That is, they spread rumors of which they are not certain that often end up creating confusion and discomfort. In fact, some gossip and rumors can cause misunderstanding, destroy lives, separate couples and friends, cause fights, generate hatred, resentment and resentment, yet there continue to be people who enjoy spreading rumors and gossip, whether or not they are aware of the harm they can to cause. These people take some ideas from reality and distort them, arriving to draw incorrect conclusions that they share with all those who are willing to listen to them. But in this way they not only damage the reputation of others, but eventually their image will also be affected as over time they will lose credibility. In the end, the gossip remains alone.

What prompts a person to invent rumors?

- Misinterpretation. Rumors are often the result of an interpretation error, that is to say, the person hears noises but does not know where the sound is coming from, so he fills the void left by the missing information using his own imagination, joins disconnected leaders. and draws wrong conclusions.
- Too many stereotypes. At the base of the rumors there are often also preconceptions and stereotypes. In fact, stereotypes often become a characteristic of the person, it is as if we were wearing blinders that allow us to see only part of the truth. Stereotypes cause people to form a distorted view of reality and fuel rumors.
- Lack of objectivity. Many people do not realize that their mood, expectations, stereotypes and, in general, their interpretation of the world, permeate their view of reality. So, they stop looking for unbiased and objective evidence, just explaining things through the way they feel, do and think. These people adapt the world in their own image and likeness. And everything that has no place they eliminate.

In some cases, rumors and gossip are not mere errors in thinking but a symptom of something more serious. In fact, gossipers try to attract the attention of others by making them take an interest in them, they urgently need to be heard and they don't care if they have to invent something false to do so. behavior that manifests itself through a complex. Rumors and gossip are the tools that allow them to transform themselves into an important person; therefore, gossip can be a problem when it becomes a habit, when it is a lifestyle and the person uses it to fit into social groups because it is not in able to use other tools to do so. In these cases it is necessary to seek the help of a psychologist, because, ultimately, the person is not happy, but lives for and through others, letting his own life slip out of his hands.

Why do the rumors spread so fast?

Not all rumors spread as quickly. Fortunately, some are born and die right away. Whether a rumor spreads depends on its importance and the degree of ambiguity. For inaccurate or uncertain information to spread it must satisfy the curiosity of many people and that, in some way, it serves to ratify their vision of the world and of the others. Therefore, rumors must conform to the beliefs of the people who spread them.So when we help spread gossip we not only repeat something we have heard, but this action also says a lot about us, it reveals that, to some extent, we believe in that voice or we use it to demonstrate some of our beliefs. person next to us. Although perhaps, this young man is just waiting for someone or is resting after a hard day at work.Likewise, if we think that our neighbor is inclined to change partners often and we see her talking to a man, maybe a little more neighbors than usual, we are likely to think the two are having an affair, even if they are not.

Before speaking, filter the information

To avoid becoming a link in a long chain of rumors, or even being the person who originates them, it is desirable that before speaking we learn to pass information through 3 filters, as taught by this account of Socrates. a disciple arrived all agitated at Socrates' house and said to him: - Master! I wish to tell you that a friend of yours was speaking ill of you ... Socrates interrupted him by saying: - Wait! Have you already gone through the Three Filters what you are going to tell me? - Three filters ...? "Yes," replied Socrates. - The First filter is the TRUTH. Have you already carefully examined whether what you mean is true in every point? - No ... I heard it from some neighbors ... - But at least you will have passed it through the second filter, which is GOODNESS: Is what you want to say to me is at least good in one of its parts? - No, not really ... on the contrary ... Ah! - Socrates interrupted him. - Then let's go to the last filter. Do you need to tell me what you want to tell me? - To be honest, no…. It is not necessary. - Then - said the wise old man with a smile, if it is not true, neither good nor necessary ... Let's bury him in oblivion ...

These functional words indicate that you are stressed out ❯

add a comment of What you don't see with your eyes, don't invent it with your mouth