Jillian Bell: "With this film I discovered running and lost 18 kg" 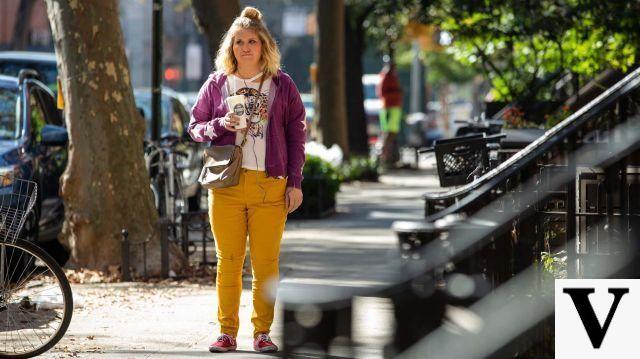 "I've never been asked to lose weight for a role, but this time it was necessary: ​​I wanted to understand Brittany's journey to change her life, and in doing so, I also ended up revolutionizing the way I approach the world" . Word of Jillian Bell, among the most talented brilliant actresses of the small and big screen.

After a career spent supporting stars of the caliber of Scarlett Johansson and Jennifer Aniston, the 35-year-old American is now the star of the comedy Brittany Never Stops (starting November 15 on Amazon Prime Video), based on a true story.

In fact, Jillian plays a 28-year-old (Brittany, in fact) in the throes of an existential crisis, who drinks too much, gorges on junk foods, doesn't like herself when she looks in the mirror, does a job she doesn't love and uses a sharp sense of humor. to protect yourself from others. When a doctor suggests she lose weight so as not to put her health at risk, she decides to take on a seemingly impossible challenge: participate in the New York Marathon.

«He thus has to face a harsh reality, made up of commitment, perseverance and great self-motivation. And more than running or losing weight, the film is about what it means take responsibility and grow», Comments the actress, who came to dispose of 18 kg exactly like the real Brittany (13 before filming, 5 more during the making of the film), running every day for 4-6 km.

“Sometimes society treats us differently when we wear a smaller size and this can lead us to lose sight of our value system. As her body changes, Brittany begins to become obsessed with the scales, but she also begins a journey that will lead her to understand how happiness has nothing to do with weight ».

With the help of an app

Scene after scene, Jillian also came to reflect on what she really wanted from her life.

“We often worry too much about our appearance and even more frequently we go from one thing to another without stopping. While we must realize that our life is happening now and we must not let it pass in front of the eyes in a passive way ", continues Bell, who in sport (as well as in meditation and in a balanced diet) has found a precious ally to keep the panic attacks from which she suffers from age under control aged 17.

«Before starting shooting I downloaded l’app Couch to 5K, which offers training plans for beginners who want to reach the goal of running 5km in 9 weeks. It was very useful to me and, one exit after another, I have found that working out helps me overcome anxiety thanks to the production of endorphins. As soon as I can, I put on running shoes, but I also love climbing and swimming ».

But in between there was some obstacle to overcome. Because if at the end of the 28 days of shooting Jillian had reached the best physical shape of his life, she wasn't okay with herself anyway.

“I was thinner, but at the same time I worried much more about the opinions of others. I was disappointed if others did not comment positively on my appearance and it hurt also to hear that I was more beautiful, because paradoxically I experienced it as the fact that before I was not pretty ».

Jillian then tried to find her balance and, just like Brittany in the film, she tried to go beyond the balance. "I treat myself with kindness and, if I happen to make an exception to the rule at the table, I don't torture myself and I continue to love myself. I regained half of the kilos lost during the making of the film, but I gained peace of mind ».

It is also for this reason that on Instagram, where it has 152 followers, Bell launched the hashtag #IGotALottaBodies (“I have many types of bodies”). On her profile she shared a series of old photos that portray her as a child, teenager or adult: images without filters, to show herself freely and send an important message of self-acceptance, with fans who responded enthusiastically.

«In every moment of my life, good and bad things have happened and, each time, my body was there and helped me move forward. We often think back to how we were and criticize our line or haircut, we are ashamed of ourselves. It is a mistake, because we must instead think that they were still magical and unrepeatable moments. That we could never live without our bodies. Understanding this is like winning a marathon ».

The plot of the comedy, which won the Audience Award at the recent Sundance Film Festival, was inspired by director Paul Downs Colaizzo by Brittany O'Neill, her best friend and her roommate in New York for two and a half years.

Curiosity that makes the whole story even more happy ending: when Colaizzo sold the rights to the script, he gave part of the fee to Brittany to thank her. And thanks to that money the girl was able to pay for the courses to obtain the certification of personal trainer and nutritionist, an activity that today he alternates with his work in the non-governmental organization of humanitarian aid International Rescue Committee.

Audio Video Jillian Bell: "With this film I discovered running and lost 18 kg"
Summer 2021 program: how to cook for weight loss ❯

add a comment of Jillian Bell: "With this film I discovered running and lost 18 kg"