It is now a notion "known and established" by the multitude (including certain insiders) - and no matter how unfounded it is, as will be explained below - that protein intake exceeding the RDA are nutritional stimulus first and metabolic then at the basis of important stress on the kidney, thus determining a negative impact on him which would inevitably lead to negative consequences for his health. 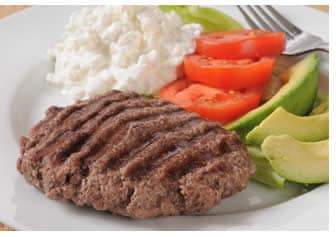 This alarm began to become pronounced, pronounced and in the public domain when the efficacy of high-protein nutritional approaches for weight loss emerged and their adoption for this purpose (10, 11, 12). The alarm would start from the hyperfiltration and from the incremental values ​​of glomerular pressure induced by the protein surplus (8, 9). The impact that a high-protein regimen has in cases of chronic kidney disease, in normal kidney conditions and on the formation of kidney stones will be examined below.

"Hyperprotein diet" this refers to a pro-die protein intake equal to or greater than 1,5g per kg of body weight (13). Chronic kidney disease is characterized by kidney damage (documented by laboratory, pathological and instrumental findings) or a decline in kidney function as a consequence of a decrease in glomerular filtration rate for at least 3 months (14). Hence, hyperfiltration and increase in glomerular pressure as consequences of excessive protein intake and as responsible for renal damage.
The most cited and accredited reference on the possible kidney damage induced by protein excesses is the Brenner hypothesis.
L'Brenner's hypothesis states that conditions associated with increased filtration and pressure would cause kidney damage, compromising its function. Although the effects of hyperfiltration - induced by the high-protein nutritional structure - on renal function in patients with renal pathologies pre-existing è documenta (21), it is also true that the scientific evidence cited by the authors on the harmful effects of high-protein approaches with regard to renal health, derives from studies on animal models and from patients with pre-existing renal diseases.
Therefore, any speculation relating to the extension and application of these conditions detected in specific and precise contexts, even towards healthy subjects and / or with normal renal functions, is somewhat out of place and inappropriate.. In fact, the changes in renal function that are observed in healthy subjects and with healthy kidneys are the reflection of a natural, physiological adaptation to the nitrogen load and the incremental needs for renal clearance. This is demonstrated by the occurrence of alterations in renal function - hyperfiltration and increase in glomerular pressure - in subjects with normal renal function in which, in fact, no sign of increased risk of renal disease has been recorded and found.
That's what happens at pregnant women (15). In healthy pregnant women there is an increase in the glomerular filtration rate of 65% (16); and despite this change in renal function, pregnancy is not a risk factor for chronic kidney disease (17).
Furthermore, renal hypertrophy and improvements in renal function of the contralateral kidney that occur following unilateral nephrectomy suggest that these processes are adaptive responses and possibly beneficial for kidney health (18).

Other evidences present in the scientific literature highlight that, despite the presence of prolonged hyperfiltration processes over time, the function of the residual kidney in nephrectomised patients remained normal without deteriorating in the long term - beyond the age of twenty (19, 20) . And still no adverse effects on renal function and / or renal damage were recorded in response to a high-protein regimen on 1135 women with renal normofunctionality (22).

Protein consumption is positively correlated with urea production (23) and its excretion is controlled by the kidney. Such physiological processes would be considered renal stress induced by protein consumption (24).
In a press release it was asserted (as will appear below: speculated) how dangerous are the high-protein contributions on renal function above all in athletes and body-builders; more precisely, the high protein intake determines an increase in nitrogen levels in the blood, nitrogen reaches the kidneys in the form of u to be eradicated with urine. The resulting incremental urination process "could" cause dehydration, thereby increasing kidney stress. And, therefore, bodybuilders could be at risk of chronic kidney disease as hyperfiltration "could" produce kidney injury, thereby reducing kidney function (25).
Scientific research, in this context, is often widely misrepresented. Indeed, laboratory research does not support these claims (26). Indeed, it has been found that high-protein diets have determined minimal influences on the individual's hydration states (26).
Why, then, is dehydration cited as a physiological consequence - in turn a renal stress factor - to the increased protein-nutritional intake? This speculation could derive from an extrapolation of a 1954 review on the nitrogen balance literature, which was then unfoundedly extended to contextual-applicative fields other than the original one (27). In this review, the survival rations of soldiers on a mission in the desert and in conjunction with limited water and energy supplies were taken into consideration!

Since the excretion of one gram of urea nitrogen requires 40-60ml of extra water intake, the increased protein inputs included in the study resulted in an increased water requirement for urea nitrogen excretion: for example, 250ml d 'water for every 6 grams of nitrogen in a dietary framework of 500kcal. Therefore, it is clear that the increased water requirement is "context-specific"And it is not necessarily applicable to contexts of adequate caloric and water intake.
Despite what is reported in the statement: «the protein intake could induce dehydration and stress the kidneys ... », there are no studies conducted on healthy subjects with normal renal function that objectively certify the relationship" high protein intake and dehydration = renal stress ". Therefore, any assertion that denounces the protein intake as a stimulus promoting dehydration and / or renal stress remains at a purely and exquisitely speculative level. L'evidence that emerges from the studies in the literature is exactly the opposite: that is, there are no cases of decrease in renal function in response to high protein intake even in those (obese, hypertensive, dyslipidemic) who are more at risk for the onset of kidney problems ( 28, 29, 30, 31, 32).
In a study conducted on 65 healthy and overweight individuals, the subjects were subjected to a hyper- or low-protein diet for 6 months. In the group with high protein intake there was an increase in kidney size and an increase in the glomerular filtration rate compared to the baseline values ​​prior to the study. There was no change in albumin excretion in either group; despite the acute changes in renal function and size, the high protein intake did not have any detrimental effect on renal function in healthy subjects (33).
Finally, in another study 10 individuals respected the diet they were accustomed to for 7 days and then followed a high-protein diet for 14 days. There were no significant changes in serum and urinary creatinine levels, much less in reference to urinary albumin excretion; all facts that reinforce the belief that high-protein intake does not cause kidney damage on healthy subjects (34).

And we come to the athletes! It is well known that athletes of strength and power disciplines consume high amounts of dietary protein and also introduce amino acid and protein supplements that significantly increase nitrogen levels. Despite this, there is no evidence that such individuals are at high risk of kidney damage or loss of renal function (35).
Furthermore, it was found that a protein intake ranging between 1,4g and 1,9g per / kg of body weight per day or its introduction according to values ​​ranging between 170 and 243% of the RDAs did not cause alterations in renal function in a group of 37 athletes (36).

High protein intake increases the excretion of potentially lithogenic compounds (tending to form sediments - Ed), including calcium and uric acids (37, 38). In an accredited study by Reddy et al. they brought out as a high-protein approach determined an increase in aciduria and calcium in the urine, arguing that these factors represented an incremental risk for the formation of kidney stones in the 10 individuals who took part in the study. But none of the 10 subjects reported kidney stones (39)!
The drastic glucose restriction adopted in the study in question may have favored an increase in keto-acid production, thus contributing to acid formation; given that food categories such as fruits and vegetables represent an important and sensitive source of basic-alkaline load, their restriction - foreseen by the protocol adopted in the study - may certainly have influenced the resulting net acid load.

Diet alone does not appear to cause kidney stone formation. This is evidenced by a study in which, under the same nutritional and hydration conditions, healthy subjects eliminated single crystals of calcium oxalate with a diameter of 3-4 microns whereas subjects prone to the formation of kidney stones produced crystals of 10-12 microns in diameter, which most of the time they joined in polycrystalline aggregates with a diameter of 20-300 microns (40).
Instead, the real causes of kidney stones lie behind important metabolic alterations (41). In fact, this is also testified to in another study, with which Nguyen et al. found that high protein intakes negatively affect the markers of kidney stone formation (such as, for example, the increased excretion of oxalate) in subjects with metabolic problems underlying the formation of kidney stones (ICSFs, or "Idiophatic Calcium Stone Formers") but DON'T on healthy subjects (42).

The factors that, on the other hand, affect the risk of contracting chronic kidney disease are: obesity, hypercholesterolemia, insulin resistance, hyperuricemia, hypertension (43). As it will be possible to deepen from the relative bibliographic note (44) to the reference study, subjects with blood pressure values ​​greater than or equal to 160/96 mmHg have a more marked decline in the glomerular filtration rate on an annual basis and a risk of early decline in renal function 5,21 times higher than in those with blood pressure values ​​below 140/90 mmHg.
The counter-proof of the importance of arterial pressure on renal function is found in various studies how anti-hypertensive therapy decreases the progression of chronic renal disease in affected patients (45, 46).
On the other hand, what surprises and goes against the common “pseudo-knowledge” and the myth of the danger of the high-protein structure is the literature that emphasizes the inverse relationship between protein intake and systemic blood pressure (47, 48). Evidence proves the confirmation of how much protein intake, together with that of fiber, has additional benefits in inducing a 24-hour lowering of systolic blood pressure in a group of 36 hypertensive patients (49).

Other articles on 'High Protein Diet and Kidney Damage'

add a comment of High-protein diet and kidney damage