Gestures: When the hands speak for you 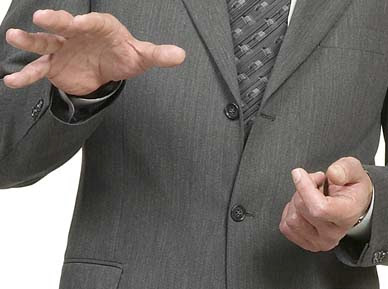 Extra verbal communication and all i gesti accompanying it are sometimes
more interesting than the speech itself. Normally a speech comes
accompanied by numerous gestures, these are movements that we make without realizing it
account and that we need to emphasize our words. Obviously, the
problem occurs when words
they do not coincide with gestures, then people may find that you are
lying.

The truth is that each of us is capable
to decipher body language. We do it unconsciously.
Thanks to this ability, a guy approaches a girl and invites her to
dance or drink. The boy has picked up some opening signals and decides to
launch. Of course, there are those who are more skilled in interpreting these extra verbal signals while others
they need more evident signals. In this case I want to refer to
hands, the best allies of a good speaker. In fact, if we look at the videos
in which you can see the speeches made by some important people,
such as the heads of state, we will realize that the hands they are a precious weapon. If we don't use them when
we speak in public, people will feel a certain indifference
to the subject matter. Gesticulating, in the right proportions, indicates passion
and strengthens the speech. Likewise, if you keep your hands hidden, the
people will tend not to believe what you are saying. But let's take a look at the main ones
hand movements and their universal significance. 1. Hands open with palms facing
up, at an angle of about 45 degrees, indicate that the person is open
and sincere in her speech. 2. The hands start with the palms facing the
low indicate that the person is convinced of what he says (it does not mean that
be the truth since we may very well believe a lie). 3. Hands open, with the palms one of
facing each other is a gesture that experts tend to use when
they talk about a subject they feel very confident about. Of course, there are many others
gestures, some of these do not always accompany a speech. For instance,
when you join the fingertips you almost always want to point
concentration while resting your hands on your lower body
they are a sign of insecurity. On the contrary, put one hand over the other
indicates self-confidence. Another very interesting detail
compared to the hands it indicates that we normally tend to hide the palms. For
this reason, when we see a person calmly showing his palms
of hands on multiple occasions, indicates that this person feels comfortable and safe
in public. On the other hand, as important as
the meaning of the gesture is also its synchronization with the words
pronounced. When a false gesture is employed, with the aim of giving
importance to a certain topic, the gesture almost always follows the words and
it lasts much longer than a spontaneous gesture. Spontaneous body movements
they tend to be in perfect harmony with the words spoken and only last
a few seconds. Finally, a punch on the table in tow
of an intimidating phrase, it does not necessarily indicate anger but rather the
desire to intimidate the other. They are two different things. However, always remember that the key
to learn to decipher extra verbal communication does not lie in learning the meaning of thousands of gestures but rather in knowing how to read gestures in their context.
Husbands stress their wives more than their children ❯

add a comment of Gestures: When the hands speak for you