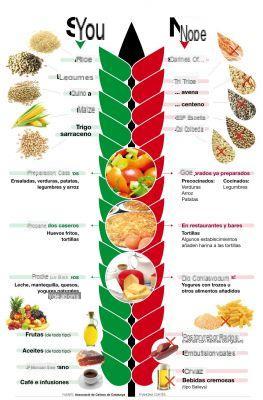 Let's find out what celiac disease is and what foods are suitable for celiacs.

What is celiac disease

La celiac disease it is a genetically determined condition in which the proteins of some grains trigger a abnormal immunological response. There is therefore a production of antibodies and activated lymphocytes that cause damage to the tissues and, in particular, to the mucosa of thebowel outfit. The consequences are malabsorption, intestinal symptoms (especially diarrhea) and deficiency symptoms.

The cereal proteins that cause celiac disease are those known as gluten. Celiacs, therefore, to stay healthy, must eliminate all foods that contain gluten.

Gluten is a family of proteins found in many cereals; for instance wheat, barley, rye, kamut, spelled, oats.

But what are the foods for celiacs, those, that is, the so-called gluten free?

Amaranth, for example, which despite having many characteristics similar to those of cereals and for this reason used in many recipes by celiacs, technically it is not. And corn and rice are also suitable for celiacs.

Furthermore, fruit and vegetables, milk, legumes, fresh meat, fish, eggs, raw ham can be consumed, natural yogurt, cream, coffee, tea, honey and many other foods. In fact, there is a wide variety of naturally gluten-free foods; to this end, we recommend that you consult the dietary advice on the website of theAssociation of the celiac country (AiC).


The exclusion of gluten from the diet, especially at the beginning, when you still don't know how to move, can seem very complicated. In fact, it is not enough to eliminate all foods that naturally contain it, it is also necessary to take some precautions and pay particular attention:


It is also important to underline that the exclusion of gluten from the diet must not also exclude the rules of a correct diet, which must be varied and nutritionally balanced, like that of everyone.

When to introduce gluten in the child's diet

> The site of the Association of celiac disease