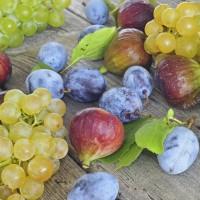 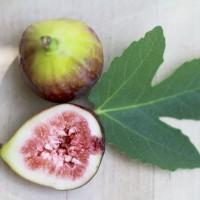 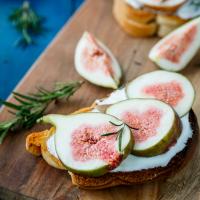 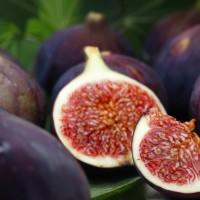 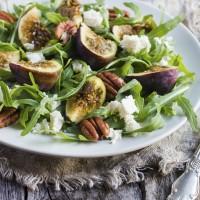 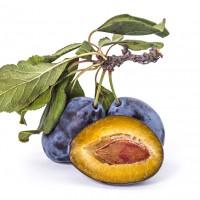 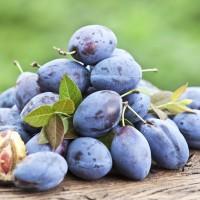 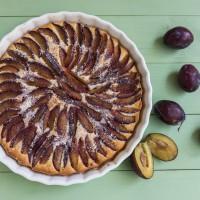 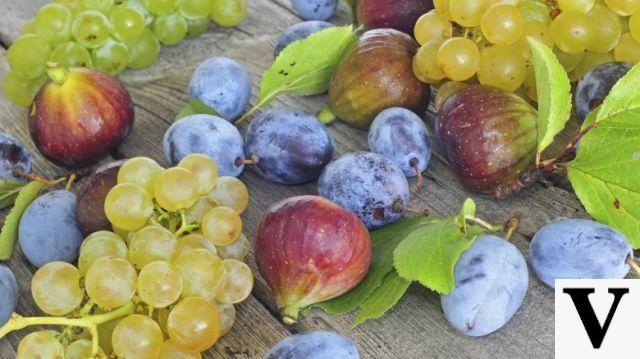 THE TIME OF FIGS AND PLUMS
With the arrival of August we are preparing to welcome new ones on our tables seasonal products, like sweets figs and succulents prunes. They have numerous positive effects on our health and it is therefore good to introduce them into your diet and consume them when the period is right. The variant of both fruits is present shoal which, if for figs it is more caloric, for plums it has many beneficial properties. Here is everything you need to know! 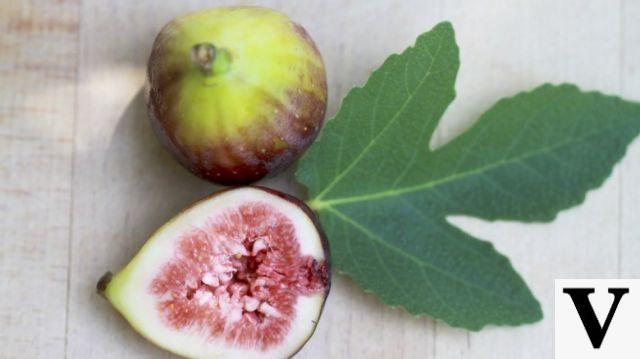 FIGS: SWEET DELIGHT
I figs (Ficus carica L.) conquer the palates of most thanks to fleshy pulp and to the typical sweet taste, which makes them perfect for sweet preparations as jams or for filling cakes, but also for bring salty. The winning combination is represented by the combination with salami or ham, giving life to cold appetizers or main courses particularly suitable during the hot season. These splendid fruits are typical ofsummer and the first part ofautunno. As for their origin, it is traced back to ancient Caria (hence the Latin name), a region ofAsia Minor, while to cultivate them would have been the first agricultural civilizations of Palestine and Egypt. Following the discovery of the Americas we witness the spread of the fig tree in that continent, then in South Africain Chinain Japan and Australia. 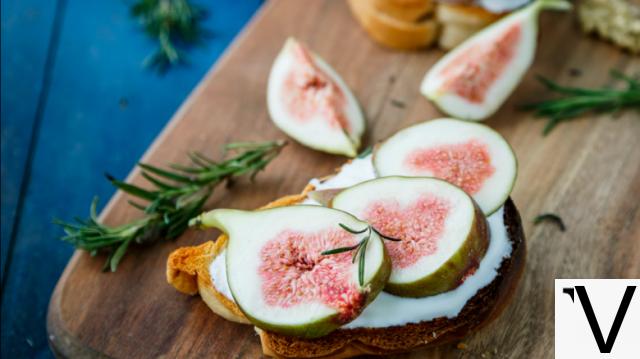 PROPERTIES AND BENEFITS OF FIGS
It is important to eat figs because they are rich in vitamins (A, B1, B2, PP e C), football (they are good for the bones) e polyphenols (natural antioxidants); they have laxative properties (being rich in fiber) e inflammatory (due to the presence of antioxidants, minerals and vitamins). They also play askin defense action and can be used in wraps to treat abscesses and swellings, for disinfiammare i foruncoli, also excellent for treating urinary or lung infections, the feverish states and gastritis. Often they are not included in diets because they are considered too caloric, but we must be careful not to confuse them with dried figs: those fresh they provide our body with about 50 calories per 100 g, while those dry 249 kcal. 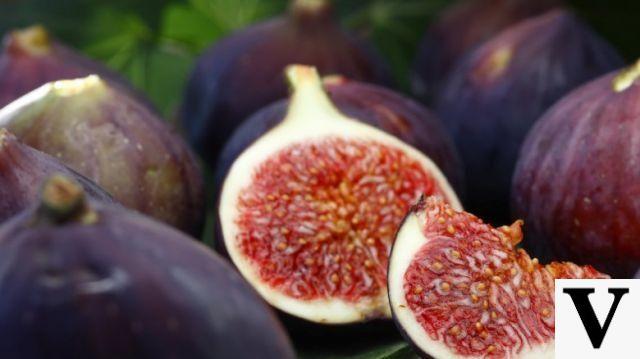 PRESERVATION OF FIGS AND CONTRAIDICATIONS
I fresh figs they are not fruits that are preserved for a long time and, if not consumed immediately, can remain in refrigerator up to a maximum of three days. It is best to store them in closed food containers to prevent them from absorbing the odors of other foods. They can also be frozen foods, but remember to consume them no later than 30 days. Another speech for the dried figs, of longer shelf life, provided they are not made accessible to insects, attracted by sugar.

Warnings for those who are predisposed to the onset of kidney or gallbladder stones: the consumption of these fruits should be limited, because they contain oxalates, calcium salts of oxalic acid. In case of interventions, avoid eating figs (at least for 2 weeks prior to surgery) as they can cause bleeding from the digestive tract in sensitive people.

For the good mood beer carrot and fig juice! 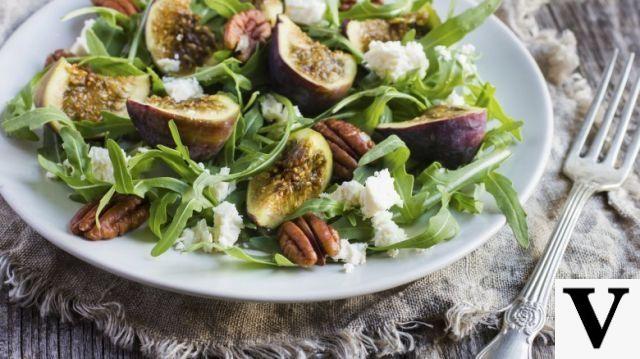 CURIOSITY ABOUT FIGS
For the induisti and Buddhists figs are the symbol of knowledge and truth, while according to the Greek philosopher Plutarch they would have a sacred value and according to other sources they would be linked to the origins of Rome. An ancient legend says, in fact, that the she-wolf who took care of Romulus and Remus was resting under a fig tree. Plato, a great consumer of these fruits, claimed that they had the power to increase intelligence, while Pliny claimed that they helped increase the strength of the young and maintain the health of the elderly. 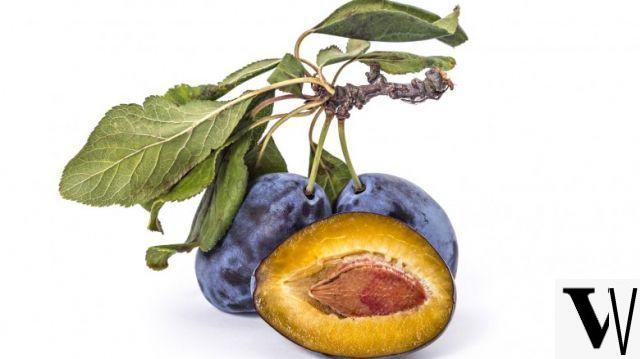 PLUMS: GOOD AND BENEFIT
Originating from the Persia, the prunes (Prunus domestica L.) were introduced in Europe by the knights of the first crusade around 1.200. They are often consumed, as well as because they are good, for theirs laxative power. In fact they are 'friends' of the intestine and are allies of our health, thanks to the large amount of potassium, football, phosphorus, magnesium, iron, vitamin A and C, polyphenols e fibers that contain. You can buy them both fresh (45 kcal per 100 g of product) both shallows; the latter have a higher concentration of nutrients, sugars, antioxidant molecules, but are also more caloric as they are dehydrated. 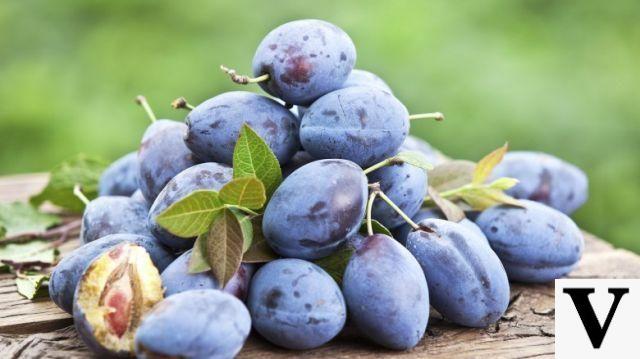 PROPERTIES AND CONTRAINDICATIONS OF PLUMS
Plums in 6 steps:
-  they have a draining, detoxifying, satiating and regulatory action thanks to the presence of a lot of water (88%) and a good quantity of fibers (especially in dried plums);
- they protect the heart and help regulate blood pressure: it is recommended to drink prune juice, rich in potassium and low in sodium;
- I'm useful for diabetics: prune juice, in fact, contains a high fiber content capable of preventing the sudden increase in blood sugars, keeping them under control;
- I'm enemies of bad cholesterol;
- in case of anemia they are a good source of iron, absorption further aided by the presence of vitamin C;
- they have properties antioxidants and anti-inflammatory, due to the presence of vitamin A and polyphenols, which protect us from free radicals, enemies of our cells.
- I am strongly laxative, being rich in potassium (190 mg per 100 g of product);
- exercise apreventive action against osteoporosis: according to US research (Florida State University), published in the British Journal of Nutrition, prunes are able to prevent bone fractures and osteoporosis in menopausal women.

Tip: consume 3-4 plums a day, fresh or dried, starting with breakfast, the most important meal of the day.

But there are also some contraindications: Which? If consumed in large quantities, they can cause Diarrhea, meteorism, flatulence. They are to be avoided in case of colitis, as they would cause swelling and increased spasms. 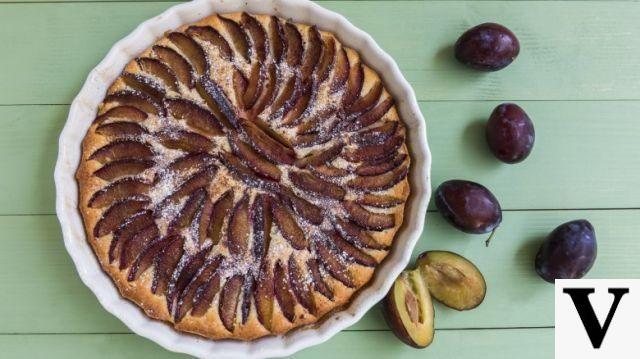 WHEN TO EAT PLUMS?
To enhance their slimming virtues, plums can become a mini-meal if consumed (fresh or dried) with the yogurt and cereals. To the morning they are excellent for promoting bowel movements and purifying, while during the day they prove to be a valid one snack to quell nervous hunger. A decoction based on plums it may be what is needed to tone the body before going to bed. Used for various types of confectionery preparations, plums are widely used for jam, to be combined also with aged cheeses, enhancing the flavor given the sour taste of the fruit.

How to cook theroast veal with prunes!

add a comment of Figs and plums, seasonal sweets