Extroverts and introverts: They choose different words to communicate 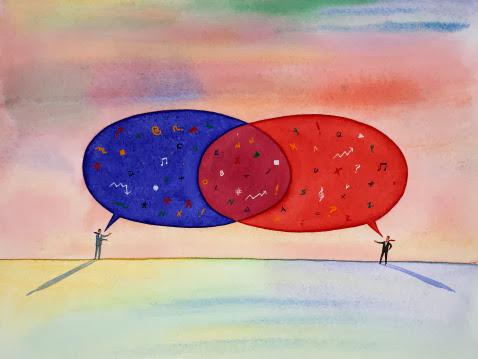 Our personality is revealed in many of the actions we do and in the words we choose. Now new research confirms that people introverted they often use concrete and precise words when they speak, while the extroverts they prefer more vague and abstract words.

The study involved 40 employees from an Amsterdam company whose average age was 34. These were given the task of describing five images that showed ambiguous social situations. Each was told that there were no right or wrong answers and that they could say what they wanted to describe the image in question.

Three days later, the participants completed a personality questionnaire. Thus it was observed that those who scored the highest on the extroversion scale tended to describe the images in rather abstract terms. For example, to describe a painting
where a couple appeared, they used phrases like "Jack loves Sue" and to use a series of adjectives that describe emotions or events that were not visible in the photo.

On the contrary, those who have shown themselves to be introverts, they tended to stick more to the facts visible in the images, they were particularly fixed in the numbers and specific characteristics of the photos.

These differences in form of expression are not entirely new to psychologists, as we all know that introverts tend to be more cautious with words, while extroverts take greater pleasure in speaking and letting their imagination run wild.

In fact, this isn't the first research of its kind. Previous studies had already highlighted the relationship between personality and language, suggesting that extroverts are more inclined to talk about family and friends while introverts prefer to talk about less personal things.

Fortunately, all is not lost for introverts, especially in the case of job interviews. In fact, several studies have shown that company executives prefer the way introverts express themselves so that the latter have more opportunities to be hired.

add a comment of Extroverts and introverts: They choose different words to communicate