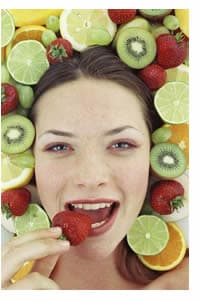 the hair, therefore the hair, is intended to amplify the tactile perception ... but they are not all the same! There are two distinct categories, terminal hairs (large and pigmented) and fleece hairs (thin and almost colorless); the hairs are terminal hairs which, if they undergo regression (alopecia), DO NOT DISAPPEAR (do not fall out) but become much more similar to those of the fleece (see baldness / alopecia).

Hair is part of the integumentary system (skin). They are defined as "skin appendages" as they "arise" (or rather originate) from the skin and (while representing structurally independent units) constantly draw nourishment and feed-back from growth or degeneration.
The disorder / blemish that most frequently affects the scalp is alopecia, especially the androgenic one. This condition is indirectly influenced by heredity; the factor responsible for "hair loss" is a dysfunction in the metabolism of dehydrotestosterone (DHT), a metabolite of testosterone. Ultimately, the concept that testosterone can be responsible for baldness is DISMISSED and we realize that, in the degeneration of the scalp, the following can participate: 1. Excess production of DHT. 2. Excessive uptake of DHT by receptors.
It follows that, to have healthy hair, it is ESSENTIAL first of all to have a certain amount of luck!
Currently, ANDROGENIC alopecia (and not telogenic alopecia - induced by one or more stressful agents both at a psychological and physical level) is evaluated as an irreversible condition, even if, thanks to the pharmacological avant-garde, with the use of some active ingredients it may be possible to reduce the degeneration times (minoxidil and finasteride).
In case the hair is not healthy, and taking for granted: a) Impeccable genetics. b) The possibility of using the best drugs for topical use and by mouth, it would be advisable to evaluate the nutritional intake as a whole since, being the scalp a "living and integral part" of the body, it requires the supply of various molecules essential to own growth and its maintenance.
Ultimately, a nutritional deficit could contribute to determining the prevalence of a so-called catagen (degenerative) phase, compared to the anagen (pro-structural) one; the depletion and thinning of healthy hair due to a food defect is clearly visible in people suffering from malnutrition, for example caused by anorexia nervosa (AN - restrictive eating disorder), lack of financial resources (third world) or from alcohol compulsive drug abuse syndromes.

It is true that healthy hair is nourished hair, but contrary to what television "claims" may lead to believe, the nutrition of the hair takes place through the blood supply of the scalp (therefore from the inside and not from the outside). It goes without saying that: if the dietary intake is inadequate, together with all the other tissues, the scalp could also be affected in a PROPORTIONAL manner to the severity of the malnutrition state.
What are the most important nutrients for maintaining healthy hair?

The sulfur amino acids (cystine and methionine) are real "bricks" for the synthesis of keratin, the structural protein of the hair; without these molecules anabolism does not occur and the relative nutritional deficiency can determine: I) A decrease in growth II) Fragility III) Thinning of the hair.


The vitamins important for healthy hair are above all those of the B complex and vitamin C. Among the vitamins of the B complex we mention the now well-known Pantothenic acid (B5); in the past, B5 was named "anti-hair loss vitamin" due to its protective effect on the scalp. On the other hand, today it is known that these results were found ONLY on the guinea pig and NOT on humans. In food, vitamin B5 is widespread in both plant and animal products.
Pyridoxine (B6) allows the use of sulfur amino acids by the hair and, in some respects, is "protective" from androgenic alopecia as it counteracts the action of 5-alpha-reductase, an enzyme that converts testosterone in DHT (it is more present in foods of plant origin).
Biotin (vitamin H) and Niacin (vitamin PP), in the synthesis of the hair, contribute to the metabolism of fats and proteins, and participate in maintaining the skin integrity of the growing tissue. They are both found in meat and eggs.
Ascorbic acid (vitamin C) promotes the synthesis of many structural proteins, therefore its deficiency could have a negative impact on the "resistance" of all skin appendages (including nails). Vitamin C is widely contained in foods of plant origin: especially in chilli, parsley and citrus fruits.
Ultimately, it is difficult to establish which vitamins are most important and which are superfluous, therefore, in general, it is advisable to at least stick to the minimum recommended rations in order to avoid and prevent any deficiency or sub-deficiency form.

Other factors that affect the constitution of healthy hair

Among the nutritional factors that can compromise hair health we cannot forget insulin resistance. This condition of "reduced glucose tolerance" determines the functional ineffectiveness of insulin which, pathologically, is not effectively captured by peripheral receptors and persists (together with glucose) in the bloodstream; insulin resistance is a bitter enemy of healthy hair and contributes to the development of androgenic alopecia.
On the contrary, a good preventive efficacy on female androgenic alopecia was observed by phytoestrogens (for example isoflavones and comustades, also defined as weak estrogens - very different from the endogenous STEROID ones); it is known that, among the various clinical manifestations and signs of pre-menopause, thinning of the scalp and / or an increase in predisposition towards androgenic alopecia are also frequently manifested. Well, thanks to the intake of phytoestrogens (which interact with the physiological hormonal axis) it is possible to reduce these unpleasant consequences and also many other symptoms such as hot flashes, dry skin, mood swings, etc. Phytoestrogens are of various kinds and are found in foods of plant origin. They are good sources of phytoestrogens: red and yellow colored fruits and vegetables, legumes (especially soy), red clover etc.