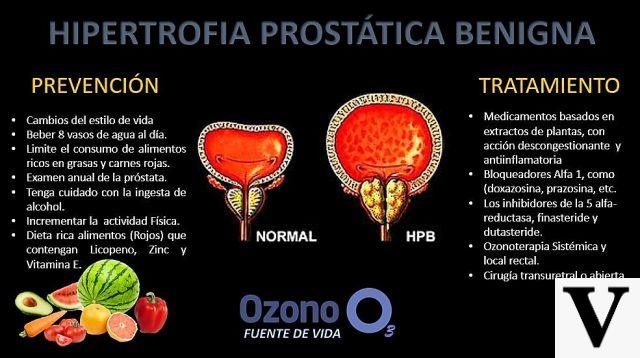 It is a uniquely male disorder characterized by an increase in the size of the prostate.

Hyperplasia is the numerical increase of the cells that make up a tissue. More precisely, the stromal and parenchymal units located in the center of the organ, in the periurethral glands and in the transition zone are involved in prostate adenoma. As a result of hyperplasia, nodules form which press against the urethra and increase resistance to urine flow.

The most frequent complication of benign prostatic hypertrophy is difficulty in urination. In turn, this disorder leads to progressive hypertrophy of the bladder muscle (increase in cell and tissue thickness) and consequent instability or weakness (atony).


Benign prostatic hyperplasia increases prostate specific antigen levels and the degree of inflammation. However, it is not a cancerous form.

Adenomatous prostatic growth begins at approximately 30 years of age. 50% of men show the first signs at 50. It becomes clinically significant in 40-50% of males.

Among the "over 50", benign prostatic hyperplasia is one of the ten most relevant and economically incisive diseases (statistical value found in the USA).

Causes of benign prostatic hypertrophy often include the presence of a set of risk factors:

Studies carried out in China suggest that excessive protein intake, especially of animal origin, could be a risk factor for benign prostatic hyperplasia.


In these researches, men over 60 years old residing in rural areas and having a predominantly vegetable diet showed a LOWER incidence of benign prostatic hyperplasia than citizens who consume more animal proteins.

A study of Japanese men naturalized in America revealed a strong association between benign prostatic hypertrophy and ethyl alcohol intake. In the same project, the correlation between the disease and the consumption of beef was found to be weaker.

In a prospective study conducted in the United States (Health Professionals Follow-up Study), researchers found a modest association between severe benign prostatic hypertrophy and excessive intake of total protein and calories, but not fat.

There is also epidemiological evidence linking prostate adenoma with metabolic syndrome. The prevention of: obesity, hyperglycemia or type 2 diabetes mellitus, hypertriglyceridemia, LDL hypercholesterolemia and hypertension, is to be considered a protective factor against benign prostatic adenoma.

The diet for prostatic hypertrophy is of a preventive nature.
The cornerstones of this food system are:

Ethyl alcohol is a molecule produced by Saccharomyces yeasts during the fermentation of carbohydrates.


The human body is NOT able to use it for energy purposes. The liver converts it into fatty acids which are deposited internally and in adipose tissue. For this reason, excess alcohol correlates with fatty liver and overweight.

Ethylism also causes psychophysical dependence and systemic intoxication of a severity related to the extent of the abuse.

The toxic effects on the tissues mainly concern: the brain, the mucous membrane of the digestive tract and the liver. Ethyl alcohol is also harmful to the developing fetus in a pregnant woman.

Universally, moderate use is recommended. Research institutions recommend different levels based on age, sex and special physiological or pathological conditions.

Assuming that the only harmless dose of ethyl alcohol is 0, we could state the following:

"A HEALTHY adult male should not exceed 2-3 alcohol units per day, preferably to be consumed with main meals.
An alcohol unit corresponds to a 125ml glass of wine or a 330ml lager beer or a 40ml spirits. The amount of alcohol contained in an alcoholic unit is approximately 12g.

Those wishing to prevent benign prostatic hyperplasia should limit themselves to taking the recommended daily dose; however, a full-blown diagnosis provides for the total abolition of alcohol ".

Overweight can be defined as an excess of adipose tissue, which increases body weight beyond the normal limits.

Adipose tissue is an energy reserve of fat, which increases with the excess of calories; these are provided by: lipids, carbohydrates, proteins and alcohol.

Overweight is promoted by a sedentary lifestyle, nutritional imbalance, alcoholism and the consumption of junk foods.

The most severe forms of overweight are defined as obesity. It is a risk factor for many metabolic disorders, namely: hyperglycemia, LDL (bad) cholesterol, triglyceridemia and arterial hypertension.

Obesity is also involved in the etiology of several autoimmune, joint, dermatological, reproductive system disorders, etc. Among these, there is also benign prostate adenoma.

Excess weight is estimated with different methods and, in ordinary people, above all thanks to the calculation of the body mass index (BMI; in English BMI). The actual overweight is evidenced by a score equal to or greater than 25; from 30 onwards the condition is called obesity.

To combat overweight and reduce the risk of benign prostatic hypertrophy it is necessary to apply lifestyle corrections; eg:

Proteins are energetic macronutrients found in most foods, both animal and vegetable.

On the other hand, a long-term protein excess can trigger side effects, especially when the foods are of animal origin (meat, milk and derivatives, fish products, eggs).

Proteins are not all the same and are categorized on the basis of biological value. This parameter examines the content of essential amino acids, or those "bricks" that the human body is unable to produce independently.
Generally, the proteins of greatest biological value are those of animals (meat, fish products, eggs, milk and derivatives). In the past it was recommended a consumption of animal proteins equal to AT LEAST 1/3 of the total. Today, the collective trend has become that of abuse.

Moreover, among the foods of vegetable origin there are "exceptions", that is foods that contain proteins of high biological value. Examples include soy and certain marine algae, which boast an extremely high-quality amino acid profile.

Among other things, the vegetable peptides of the most common foods (for example cereals and legumes such as: rice and peas, wheat and beans, etc.) can be associated with each other, compensating for their biological value.

By varying the diet it is possible to obtain all the essential amino acids in the right quantities and without resorting to large portions of meat, cheese, etc.

To conclude, those of animal origin are extremely nutritious foods; on the other hand, the excess must also be considered potentially harmful for benign prostatic hypertrophy. In the Western diet, too large and frequent portions are consumed, which can be a risk factor for the onset of this disorder.

The recommended protein limit is different based on age, any special physiological conditions and the research body issuing the recommendation.

By respecting what is specified in the table below, it is possible to avoid protein excess of animal origin.

NB. The portions of meat, fish, eggs and cheeses are to be considered WHOLE if used as a main course of the meal (for example, the second dish of dinner).

On the contrary, they should be halved if they have a less important function (for example, a small dish after the first course at lunch).


Other articles on 'Diet for Benign Prostatic Hypertrophy'

add a comment of Diet for Benign Prostatic Hypertrophy-Hyperplasia