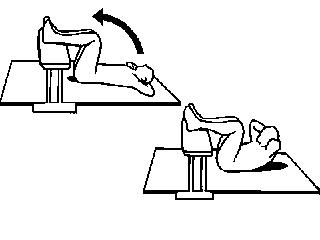 Crunch on a flat bench with hips flexed to 90 degrees and feet in suspension: Execution

The starting position sees the athlete lying on his back on a bench with the hips flexed at 90 ° and the legs in suspension. The hip angle should remain constant throughout the exercise. The portion of the body initially in contact with the bench goes from the lower angle of the shoulder blades (variable subject to the anthropometric characteristics of the athlete) to the buttocks, while the shoulder blades and head are suspended and tilted downwards in order to fully stretch the rectus abdominis . Hands can be held at the sides, crossed across the chest, at the sides of the head at the temples, or behind the head with shoulders fully flexed and elbows extended. The list was written in ascending order of difficulty. Once established where to position the limbs, it is no longer possible to change this parameter except as a cheating technique or to lighten the load during a “stripping” series. The execution consists in performing a spine flexion, taking care to keep the lower back in contact with the bench for the entire duration of the exercise. The distance between the chin and the breastbone should remain as constant as possible. The range of motion is reduced, as lifting the back too much ends up flexing the hip as well, turning the crunch into a sit-up. In case the lower back comes off the bench during the execution of the exercise, despite the athlete's commitment to avoid it, it is necessary to switch to a less demanding variant of crunch. To emphasize the work of the oblique abdominals, it is possible to perform the concentric phase of the movement by twisting the torso towards the right side; in this movement the work of the external obliques of the left side and of the internal obliques of the right side is maximized. The movement is one-sided and the description refers to the right side. Repeat in a mirror image for the left side.