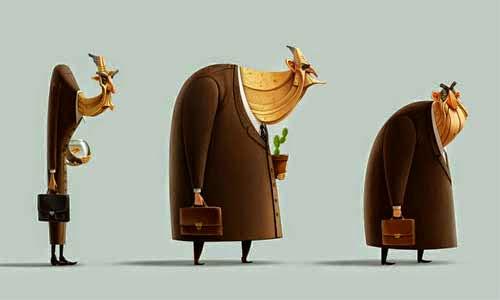 Bureaucracy makes me sick. I confess it. I never understood why you have to do ten documents when only one would have been enough. I don't understand (and I think it always will be) why we invest so much time moving from office to office when we could use that time in a much smarter way to work or relax (or do whatever we want). it is a heavy machine that knows no reason and crushes us under its weight. It drags all people of any social class with it, denying them the right to individuality, to think and decide. Yet, the bureaucracy did not fall from the sky, we built it and we somehow contribute to perpetuating it; especially those that are part of it, of course.

One way or another, it is always helpful to know the different types of bureaucrats found in offices around the world. So we will know how to react and minimize the chances of dying in an attempt to get any trivial document.

- Short-sighted bureaucrat. He is not an employee who wears glasses, but the typical person programmed only to stamp, print a document or who knows only one article of the law. And he never goes beyond his duties, because he doesn't want to or care. When you are in front of such an employee, you are likely to have to queue more, go through several counters and walk more than jogging. The solution? Arm yourself with holy patience so as to make the Buddha himself envious.


- Shark bureaucrat. He is not an efficient employee but, on the contrary, he is a person who adopts the typical strategy of some sharks, who enter a catatonic state like when they believe they are in danger by pretending to be dead. These bureaucrats, when asked for something that deviates a little from the rules (even if perfectly understandable and logical), look at you without understanding what you say, as if you were speaking a foreign language. The solution? You need to explain yourself the mechanism they should know, and if they don't understand it the fifth time around, you'd better give up and ask another official for help.

- Bureaucrat rotten recordor. I suspect these workers have received a few basic psychology lessons as they are true masters in the art of the broken record. In practice, whatever you ask them the answer is always the same, because they recite a pre-established script that they intend to follow to the letter. In these cases, no matter the question, you will always get the same answer, so much so that sometimes we come to doubt our ability to express a problem in clear and concise terms. The solution? Find the answer somewhere else, because obviously the person in front of us is not the best person to help us.

- Sadistic bureaucrat. This is the typical employee who as soon as you tell him what you want to do immediately discourages you. He immediately tells you that getting the documents or permit you want is more difficult than crossing Niagara Falls on a motorbike, telling you that you better not even try. His way of communicating is so daunting that he manages to convince most people, and by the way, he spends all day in the office doing nothing. The solution? Go on. Let him know that you have received the message and ignore it.

- Elusive bureaucrat. This is the typical officer or employee who always blames others (co-workers, boss or even yourself). Once an employee made a mistake in putting my date of birth on a certain document, the next day I detected the error and asked him to fix it. This one got angry and asked me arrogantly: "So what month were you born?" As if I went around the world changing my date of birth at will. The solution? Don't try to hold him accountable as he never will be, arguing for accountability leads to a dead end, just ask him to do his job and try to solve the problem.

- Employee in danger of extinction. In this case, it is an official who dominates his work, who cannot be called a bureaucrat because it would be almost disrespectful. This person gives you quick and understandable answers. With these people the bureaucracy becomes lighter because even if they have to follow some rules, they are able to understand your case and try to orient you towards the simpler path.

Of course, it's not fair to blame the employees for everything. There are several mechanisms that lead a person to become a bureaucrat. But this will be the object for a future article ...

Reverse Psychology: To be happy, focus on what makes you unhappy ❯