Buffalo mozzarella: why people like it more and how to choose the best 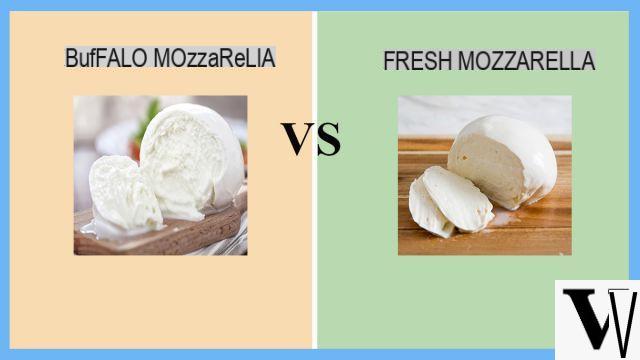 Whether in the shape of a cherry, bead, morsel, knot or braid, the buffalo mozzarella is liked more and more. Especially if it is Dop, that is a Protected Designation of Origin.

The Consortium that protects this product has recently communicated an increase in its sales: about 47 million kilos in 2021 alone. E also abroad the trend is growing, as the figures from Intesa Sanpaolo's Monitor Mezzogiorno show: + 19,4% of exports. But there is more.

According to a Coldiretti / Ixè survey, about 4 out of 10 villagers (42%) returned from their holidays with typical products as souvenirs. And the buffalo mozzarella was classified tops the list of summer 2021 favorites.

Moreover, it has illustrious "testimonials", including international ones: from the tennis player Roger Federer (whose passion for buffalo mozzarella was told by Stefano Semeraro in the book Il Codice Federer) to Ivanka Trump (on her trip to Rome in May 2021, the daughter of the US president ordered caprese salad with buffalo mozzarella). From the dad of Facebook, Mark Zuckerberg, who ate it during his honeymoon in Rome, to the writer Roberto Saviano, who in the book Come away with me even cited it as "one of the 10 reasons why it is worth living".

HOW CHEFS USE IT

If in his new restaurant in the Galleria in Milan, Carlo Cracco he adds it raw on a very special margherita pizza, other chefs propose more daring pairings.

"The perfect combination is with tomato, because the vegetable gives acidity to the dairy product, which however also goes well with seafood, squid ink, eggs, peppers, aubergines, even berries and mint ", says the chef Rosanna Marziale, ambassador in the world of buffalo DOP Campania and author of the book Evviva la mozzarella! Gourmand proposals with the buffalo from Campania (Gribaudo).

The most imaginative recipes? From the combination with cucumbers and jellyfish of Gennaro Esposito, to the one with the oyster of Antonino Cannavacciuolo, up to milk rice of Massimo Bottura, obtained by pressing the buffalo mozzarella.

According to the food and wine critics of Gambero Rosso, find the best buffalo mozzarella from Campania Naples at Eccellenze Campane, via Benedetto Brin 69, and from Gourmeet, via Alabardieri 8. A Milan, on the other hand, Valerio Visintin, the "incognito" food critic of Corriere della Sera, points out, among others, the Bufalatte shop, in via Pavia 3. While, according to the reviews of the Tripadvisor site, a Rome go without fail at Il Regno della Bufala, in via delle Cave 73, ea Torino at the Rosario Dairy, via Pietro Cossa 293 / 3d.

I like the buffalo mozzarella so much that its production has extended far beyond the classic areas. They do not win the Dop brand, but those produced in the North are also highly appreciated, where buffalo farms have multiplied. Among the many, that of the Bufala più company (250 head of cattle in the province of Bergamo) which also distributes its fresh products in three points of sale in Milan (bufalapiu).

Bell or not, how to recognize a quality product? «Once extracted from its preservation liquid, mozzarella must have the shiny and elastic skin and a porcelain white colorHe replies Maria Sarnataro, agronomist and vice president of the National Organization of Cheese Tasters (Onaf). «When cut, its structure must turn out spongy and do not lose too much liquid».

WHEN IT IS DOP

«The DOP (Protected Designation of Origin) trademark is attributed only with buffalo mozzarella from Campania, which is produced in Campania, in fact, but also in some provinces of Lazio, Puglia and Molise, in compliance with very specific rulesHe explains Pier Maria Saccani, director of the protection consortium based at the Royal Palace of Caserta . «They are recognizable because they have a logo with a red sunburst, with the profile of the head of a black buffalo in the center and the inscription at the bottom Mozzarella di Bufala Campana. Those produced in other parts of the country (or that do not comply with the strict disciplinary set for those with a protected designation of origin), must instead write on the label “buffalo milk mozzarella” ».

5 TIPS TO ENJOY IT AT THE BEST

1. Always leave it immersed in its governing liquid until it is time to consume it. And if by any chance you don't finish it all, put it back to soak to prevent it from drying out too much.

4. Remember that mozzarella should be enjoyed immediately after purchase. However, if you plan to eat it after 3-4 days, put it in the fridge with all the preserving liquid.

5. If instead you decide to use it as ingredient of other dishes, before placing it in the refrigerator "drain" it: in this way you will eliminate the excess water and obtain the right consistency to cook it.

Audio Video Buffalo mozzarella: why people like it more and how to choose the best
Pasta made in the country, it is the wheat that makes the difference ❯

add a comment of Buffalo mozzarella: why people like it more and how to choose the best