A healthy diet involves a high consumption of fruit, this is known, but in order for thesupply be also aware, it is important to undertake a path of discovery and rediscovery of lesser known fruits, generally relegated to the of outside the logic of the agri-food market.

Certain unique flavors, and all the benefits that can be obtained only thanks to the fruits of plants not selected for commercial purposes, can only be experienced by those who have the desire and curiosity to try their hand at research or cultivation of rare or unrecognized plants.

In this article we will discuss 3 fruits to be considered unknown: a fruit native to the Yucatan, theacerola (Malpighia emarginta); the pawpaw (Asimina triloba), one of the few fruits originating in the area corresponding to the United States; and the cucumber sweet (Solanum muricatum), an interesting solanacea which is presumed to come from the border areas between Chile and Peru.

The small evergreen acerola tree produces a fruit apparently similar to a cherry, fiery red, juicy, as sweet as it is sour, containing three clear seeds.

Although originally from Yucatan and the Caribbean, the fruit of the acerola it was so interesting and valuable that it was domesticated and cultivated in many others as well countries of South and North America, Africa, India, Australia.

It is considered one of the richest fruits ever in vitamin C, and it is good to remember that for humans, food is the only way to take ascorbic acid, unlike many animals that can synthesize it starting from sugars such as glucose or dextrose.


It also contains almost the entire range of B vitamins (especially the B5) and is also particularly rich in manganese.

Because of his antioxidant properties, acerola is consumed in many countries such as fresh fruit, in form of juice very delicious, baby food and concentrated pulps.

Find a traditional use in the fight problems such as diarrhea, fever, liver problems. It is a food ideal for strengthening the immune system, to counteract oxidative stress and coronary artery problems.

Acerola rich in vitamin C against the flu 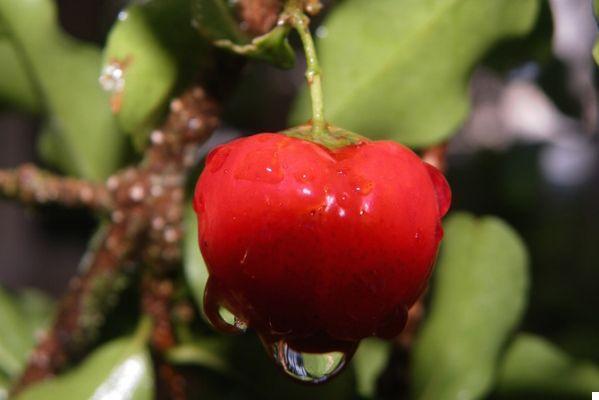 One of the favorite fruits of the Native American tribes was the pawpaw, from which, among other things, the term "papau" derives root of the name papaya.

The fruit is produced by a tree of the Annonaceae family about ten meters high, with a very thin stem, and has a shape that may seem likeIntermediate between a smooth Graviola and an elongated mango.

Its color is yellowish green when fully ripe, the pulp is intense yellow rich in seeds and fatty acids, especiallycaprylic acid, an excellent antimicrobial in addition to stimulating the appetite. The flavor fluctuates between that of banana, melon and cherimoya.

Some phytosubstances contained in the fruit are extracted and used due to their toxicity useful for counteracting the spread of cancer cells, in the case of colon cancer and prostate adenocarcinoma. 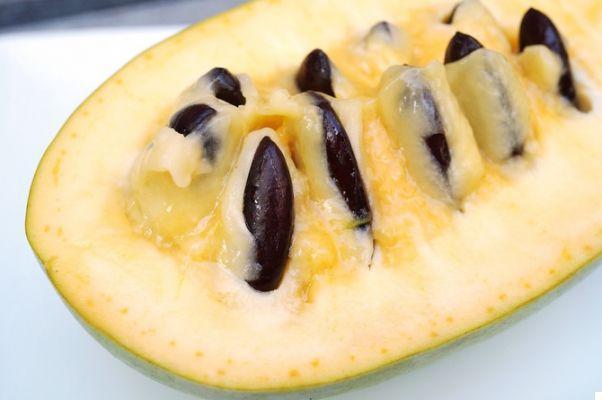 The Spanish name by which the fruit is known (which literally translates as "sweet cucumber") suggests his Latin American origin.

The fruit of the pepino dulce hangs from the bushy and leafy plant; at the beginning it is green and then becomes creamy yellow, slightly orange, with brown or slightly purplish streaks. The shape is oval-heart-shaped and the flavor is interesting and sweetish it is somewhat reminiscent of melon, cucumber, pear and banana.


Originally from South America, pepino dulce was first and foremost exported to Australia, USA, New Zealand, but over time its cultivation has spread to many North African and Sub-Saharan African countries, especially Morocco and Kenya, to those of the Fertile Crescent and to other Mediterranean countries such as Spain, Cirpo, Turkey. It is also quite successful in Japan.

It is a very fruitful one rich in fiber and guarantees a good intake of antioxidants, especially carotenoids and vitamins such as C and K. These elements, plus the minerals and some secondary metabolites typical of solanaceae are indicated to counteract oxidative stress and to effectively reduce "bad" cholesterol. 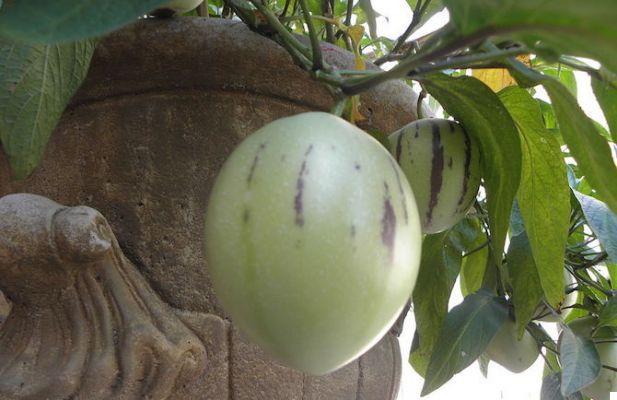 Luck aside, it is not always easy to find these fruits in our area. You can rely on freight forwarders via the internet, which, due to competition, offer increasingly affordable prices, but you can also try their hand at their cultivation.

L'acerola it is a sapling that can often be found too in the form of bonsai, it tolerates temperatures close to freezing and winds that are too strong. The less stress it is subjected to, the sweeter the fruit will be.

Il pawpaw is a tree of approx 10 meters, which also requires temperatures not lower than 5 ° c.

Il sweet Cucumber it can be easily planted in the garden like a tomato or eggplant plant, can withstand the cold but often requires water.

> Natural vitamin C supplements, what they are and when to take them

add a comment of Acerola, pawpaw, pepino dulce among the unknown fruits