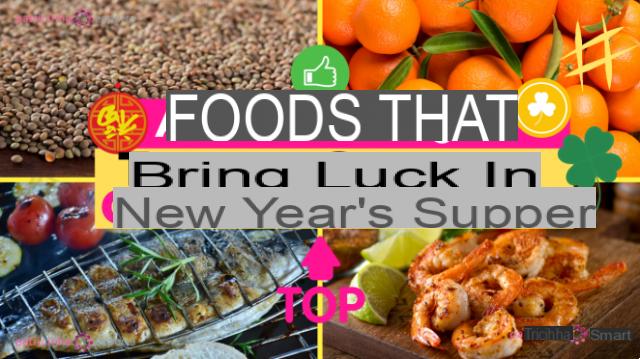 Why do we eat lentils on New Year's Eve?

Here is a list of propitiatory foods for your New Year and some simple and nice ideas.

They come from the Greek or Roman traditions, they get lost along the Silk Roads, coming from the Far East, or they are simply the wise rites of the peasants or the village "holy men".

How important food is and how much energy does it give or not you can guess it and put it into practice even more on New Year's Eve, with the transition from old to new year.

So choose foods, decorations and centerpieces, colors and clothes that can propitiate a good 2021, bring peace and health into the home and maybe some little financial help!

Here they are hot on the table, inevitable, many and simply stewed with shallots, tomatoes, salt and pepper.

Lentils, beloved dish of vegans and vegerarians, are on everyone's plates on New Year's Eve because they bring good, in particular they are said to bring money: thanks to their round and flat shape, they look like many small coins.


Why not use lentils, filling small colored bags, as a placeholder for preparing and decorating also the table of the Last?

Both the village and the little ones tangerines Chinese. Theirs colore to remember that ofgold, Then their symbolism is connected to wealth and abundance.

Eating a lot of them also keeps you healthy, thanks to Vitamin C that contain. Do not miss them as a final post-binge "degreaser"!

In Greek mythology the plant itself of the pomegranate it was withheld sacred.

The small red and juicy grains are widely used in India to make them moisturizing drinks and sweet juices, and, according to the Indians, they are precious allies in fighting sterility.

How to serve maelagrana on New Year's Eve? In addition to opening it as it is, natural, distributing grains to everyone, it can be used for the preparation of risotto, blending a part of it to put at the end of cooking and keeping a few grains to decorate each dish, see next point!

Of all colors, integral, red, black. The rice brings abundance, then green light for risotto with seasonal vegetables or fruit, such as pomegranate risotto, and sprinkle a nice trail directly on the table, perhaps drawing some Indian kolam, and steal some grains to keep in your pocket!

Red like pomegranate, the Chili pepper chase away troubles and misfortunes. Good luck wants it to be precisely its pointed shape capable of destroying the evil eye.

Ancient peoples such as the Aztecs and Maya already used it as medicine. To give us valuable nutrients and substances that are good for the stomach, get at least a couple of strong ones to dress vegetables or to prepare sauces, such as "pico de gallo" sauce for nachos as an aperitif.

Se mangi l'grape on New Year's Eve, you count the money for the whole year! Here's why the Spaniards eat a grape with each toll of the bell as the year passes.

You too can imitate them, filling the table with this fruit of the abundance of every color, but be careful not to gorge yourself!

What's not to eat on New Year's Eve?

No chicken, turkey or poultry, anything that flies could take your luck away.

Not even crab or lobster are good, because walking backwards symbolize "taking steps back" instead of forward!

How to celebrate New Year in a spiritual veg way