10 techniques to help a child love himself more 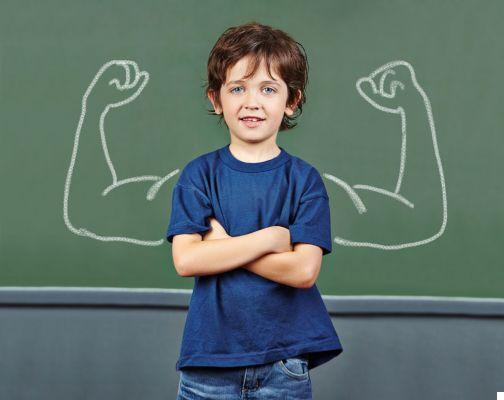 Parents can't protect their children from all the problems they will have to face throughout their life, but they can contribute to making them develop a very powerful tool: self-esteem.In fact, the child's self-esteem is built on the basis of the relationship he has with his parents, teachers and peers. Self-esteem is simply the set of feelings he expresses and largely depends on the image he has of himself and his abilities. If the child is confident in their abilities, they have a good chance of developing a decent self-esteem. But if he doubts his potential and is convinced that he is wrong to do everything, he will not have positive feelings about himself. nurture healthy self-esteem in their child, but often, due to bad habits or relationship patterns that they have learned in turn from their parents, they do not pay much attention to this aspect and, instead of making the child accept themselves, they generate negative feelings that they lead him to despise himself.

How to develop self-esteem in children?

1. Become a positive role model. Children learn largely by imitation. With them it is not worth the "do as I say and do not do as I do". If your child understands that you are a person with low self-esteem, you complain all the time and don't take responsibility, he will end up being the same as you. Therefore, it is important that you look after your self-esteem. After all, you are her role model.
2. Establish clear boundaries. Children need clear rules to grow up. Limits not only indicate how far you can go, but they also convey confidence and confidence, two essential qualities for developing good self-esteem. But make sure they are logical, sensitive and consistent boundaries.
3. Correct behavior without hurting the person. There are several ways to correct a mistake: you can blame the child or you can focus on inappropriate behavior. However, the most important thing is that the child understands that a mistake does not define him as a person, therefore, phrases such as "you are good for nothing" or "you always get it wrong" should not be used. Focus on the behavior, don't make value judgments about the person.
4. Focus on the effort rather than the result. When embarking on a journey, the important thing is not the goal itself, but the person we have become in trying to reach it. The effort and energy we have invested can be even more important than the result obtained. Therefore, it is essential to value the effort made by your child, even if he was unable to complete the task or made a mistake in one of the steps. At the end of the day, rather than having developed perfect handwriting, the determination he has shown in the attempt is more important.
5. Love unconditionally. If the child learns that to get your love he will have to behave as you want his self-esteem in the future will depend on the approval of others and he will become a person with no opinions of his own. Therefore, it is important that children receive unconditional love from their parents. This does not mean that you have to accept their negative behavior, but that you love them despite the mistakes they make and the flaws they have. Take every opportunity to tell him how much you love him and how proud you are of him.
6. Correct their erroneous beliefs. Children's thinking does not always follow a logical thread so that at times it can develop irrational beliefs. If you find some, correct them now, so they don't grow excessively in the future. For example, don't let her self-esteem depend directly on her physical appearance or some special abilities. Teach him to love himself as he is, with his strengths and weaknesses. Your job is to help him judge himself more objectively so that he can develop a more realistic concept of himself.
7. Stimulate healthy risk-taking. There is nothing that harms self-esteem more than overprotective education. If the child fails to test his abilities he will never know how far he can go and will become a fearful and insecure adult. Therefore, it is desirable that from childhood he is stimulated to take certain risks in such a way as to allow him to take a step forward and generate new opportunities. After all, our "I" is not a static entity, but enriches itself with every experience.
8. Let them make their mistakes. Mistakes can turn into very effective life lessons. But sadly, many parents try to prevent their children from making mistakes and do not realize that by doing so they preclude them from learning, growing stronger, and building self-confidence. The key is to not let the frustration appear, offer your help whenever she needs it.
9. Don't praise their successes. Healthy self-esteem is not artificial, but is based on a realistic concept of self. Therefore, one should not constantly praise the child or extol his achievements, but take note of the results and the effort made. In fact, it has been seen that exaggerating praise can backfire on him and end up damaging his self-esteem. So if you like what he drew, tell him, but don't go overboard by telling him he's the best painter in the world.
10. Give him quality time. The best way to raise a child's self-esteem is to let them know that they are very important to you. And to do this you have to spend time with him. This is the only way you can let him know that he is important to you. In fact, if you don't have time right now, you better say it right away and dedicate some good quality time to it later. The child must feel that even if he may not have your full attention all the time, you still care about him, his things and needs. Finally, always remember the words of the British sociologist John Ruskin: “Raising a child does not mean make him learn something he did not know, but make him someone who did not exist before ".
10 tricks for making better decisions ❯