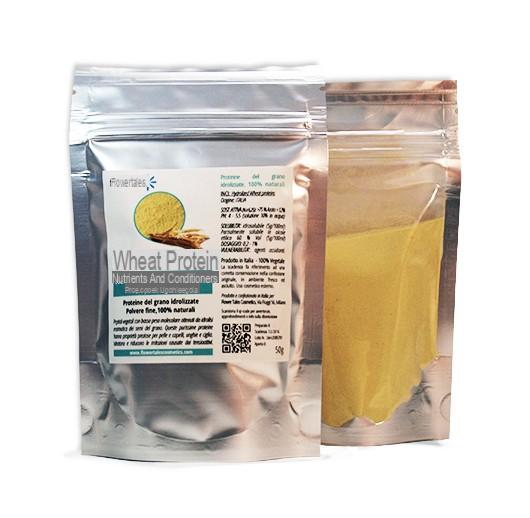 Wheat or wheat, whose Latin name is triticum, is a widely spread cereal (hence a grass), because it is adaptable to almost any climate and soil on the planet.

Thanks to its very high productivity, it is also possible to obtain food products at medium and low cost but characterized by a considerable energy intake.

Wheat is mainly used in the production of flour, from which it is possible to obtain various types of bread and pasta.

Wheat flour is obtained by grinding and sifting (sieve) the grains, and based on the refining of the flour it is possible to produce: wholemeal flour (the richest in fiber), type 2, type 1, type 0 and type 00 flour ( the lowest in fiber).

Wheat contains all three macronutrients, but being a cereal, its energy supply derives above all from the carbohydrate portion in a complex form (starch). The lipid content is decidedly limited and, like fiber, inversely proportional to the degree of refinement; wheat is cholesterol-free and mainly contains unsaturated fats (therefore of good quality) but - assuming a contribution comparable to that of the food portions recommended in the national guidelines - it does not significantly affect the overall lipid balance.

Regarding the quantity and quality of the proteins contained in it, wheat is NOT one of the most appreciable food protein sources; however, remember that the dietary role of wheat in achieving the recommended ration of essential amino acids must be contextualized and evaluated in a subjective way.

Wheat also contains mainly non-soluble dietary fiber which is proportionally accompanied by the supply of Niacin (vitamin PP) and magnesium (Mg); the higher the level of refining, the lower the quantity of micronutrients and dietary fiber of the flours.

Based on their solubility, wheat proteins can be classified into four groups:

Albumin and globulins are water-soluble proteins, while gliadins and glutenins represent the insoluble portion in water and associated they form gluten.
Among the wheat proteins, gluten is the best known for:

To date, the diagnoses of celiac disease seem to increase dramatically, even if many of these concern less severe or almost asymptomatic forms; moreover, such a spread is undoubtedly contributing to the onset of many other atypical and probably psychogenic intolerances.

In the form of a dietary supplement, the powdered wheat proteins are commercialized by leveraging the absence of lactose and cholesterol, the high intake of glutamine and the suitability for consumption by vegans.


Purely as an indication, we report the amino acid composition of various protein supplements, in order to obtain an immediate comparison between the proteins of wheat and those of soy, whey and egg; it should be noted that the sum of the individual amino acids does not coincide perfectly with the total protein content (due to technical defects which can be found in practically all the manufacturers' data sheets).

Gluten is a lipoprotein formed by gliadin and glutenin in the presence of WATER; these components are NOT only present in wheat, but also in other cereals. Among them the most common are: spelled, rye, kamut and barley.

Gluten is composed of 75-85% of proteins, 5-7% of lipids, 5-10% of starch and only 5-8% of water; gluten is activated ONLY in the presence of water, therefore it is possible to isolate it from the flour simply by hydrating it and subjecting it to multiple consecutive washes to gradually dilute the residual starch. A similar procedure can be useful for evaluating the "strength" of this protein (useful in bread making) or for the preparation of seitan, a dietary-vegetarian meat substitute. Gluten is also used as a thickening additive and industrially as an adhesive for the finishing of papers and fabrics. In culinary preparations, gluten provides above all ELASTICITY thanks to the typical NET structure (which retains carbon dioxide) and allows the dough to rise.