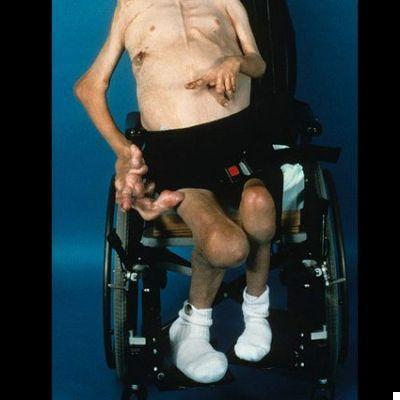 Due to a specific mutation in the AKT1 gene, Proteus syndrome is never an inherited condition; this means that at its origin there is always an acquired mutational event, which takes place after conception, in the very early stages of embryonic development.
Diagnosing a disease such as Proteus syndrome is not easy, because the symptoms vary from patient to patient (therefore there is no reference symptomatological picture) and because a genetic test is needed on a sample of cells taken from a tissue or organ that has suffered from uncontrolled growth.
Currently, those suffering from Proteus syndrome can only count on symptomatic treatments, that is, aimed at relieving the symptoms.

What is Proteus Syndrome?

La Proteus syndrome is a genetic disease, the main characteristic of which is to cause, in its carriers, the uncontrolled, disharmonious and completely random growth of bones, skin, muscles, adipose tissue, blood and lymphatic vessels, internal organs of the trunk and organs of the central nervous system .
As a result of the aforementioned uncontrolled growth process, Proteus syndrome can profoundly disfigure the physical appearance of those affected, so much so as to make them, in some circumstances, very different from any healthy human being.

In describing the most important feature of Proteus syndrome, the previous definition used the expression "uncontrolled, disharmonious and completely random growth".
Since some readers may wonder what the aforementioned expression means, it is necessary to give a brief explanation of the individual terms, anticipating some information on the causes and symptoms:

Epidemiology: how common is Proteus syndrome?

According to statistics, Proteus syndrome has an incidence of less than one in a million cases. Hence, it is a very rare genetic disease.
However, it should be noted, for many experts in the field, the condition in question would be underdiagnosed; in other words, more people would be born with Proteus syndrome than reported by statistical epidemiology studies.

Origin of the name

Proteus is a sea god of Greek mythology, who possesses the extraordinary ability to transform his physical appearance whenever he deems it necessary.
Who gave the name to the Proteus syndrome chose to refer to the god Proteus probably because the manifestations of the genetic disease in question vary from patient to patient, in a completely random way.

Proteus syndrome is due to a specific mutation of the gene AKT1, located on the chromosome 14.
In the human being, the aforementioned mutation is always acquired spontaneously, out of nowhere and without precise reasons, in the course of embryonic development - that is, after the sperm has fertilized the egg and embryogenesis has begun.

What causes the gene mutation associated with Proteus syndrome?

Background: the genes present on human chromosomes are DNA sequences that have the task of producing fundamental proteins in biological processes essential to life, including cell growth and replication.

In the absence of mutations in its charge, the AKT1 gene produces a protein responsible for regulating the processes of growth, division and cell death; in other words, it gives life to a regulatory protein of the cell life cycle, avoiding the phenomena of cellular hyperproliferation.
In the presence of the mutation responsible for Proteus syndrome, the AKT1 gene loses all its regulatory properties (it is no longer an effective regulator of the cell life cycle) and this means that the affected cells are subject to uncontrolled growth and division.
The lack of effective regulation of the cell life cycle in Proteus syndrome patients is the reason why some parts of the body are involved in excessive growth.

Proteus syndrome is an example of genetic mosaicism

In subjects with Proteus syndrome, the cellular heritage includes healthy cells, whose DNA is devoid of the AKT1 mutation, and diseased cells, carrying the AKT1 mutation on the DNA.
In genetics, this particular circumstance - that is the presence, in a multicellular individual, of two cell lines with different DNA - is called mosaicism (o genetic mosaicism).
Mosaicism is the explanation for several features of Proteus syndrome:

In genetics, the term mosaicism indicates the presence, in a multicellular individual, of two or more different genetic lines that all find expression (ie they are visible).

The symptoms and signs of Proteus syndrome vary from patient to patient, depending on the tissues and organs that are overgrowing (or, in any case, undergoing the AKT1 gene mutation).
Having clarified this aspect, in the presence of Proteus syndrome a typical symptom picture includes:

To the typical clinical manifestations noted above, Proteus syndrome may sometimes add another set of symptoms and signs, which include:

When Proteus syndrome affects the brain, it is very frequently associated with the facial abnormalities and ocular problems mentioned above.
The reasons behind such associations are currently a mystery.

When does the symptomatology appear?

Most people with Proteus syndrome do not have any symptoms or signs of the disease at birth. Proteus syndrome, in fact, tends to give the first manifestations of itself between 6 and 18 months of the patient's life, becoming ever more serious from that moment on.

Over time, Proteus syndrome can lead to various complications. These complications are substantially what results from the inexorable worsening of the symptomatological picture; indeed:

The diagnosis of Proteus syndrome is somewhat difficult, even for a very experienced doctor.
The main reasons for the diagnostic difficulties are due to the wide spectrum of all possible symptoms and to the fact that the mutation in the AKT1 gene is not easily detectable.

What is the most effective diagnostic procedure?

To be able to identify Proteus syndrome, doctors consider it essential: to conduct a thorough physical examination, compare the data that emerged from the latter with i diagnostic criteria established by the medical community for the disease in question and, finally, carry out a genetic test on a sample of cells from a tissue or organ that has been affected by an abnormality.

IS A GENETIC TEST ON A BLOOD SAMPLE EFFECTIVE?

Genetic analysis carried out on a blood sample almost never makes it possible to diagnose Proteus syndrome, as the AKT1 mutation is generally absent in blood cells.
This is why doctors, when dealing with a suspected case of Proteus syndrome, use a genetic test on a sample of cells belonging to an abnormal-looking tissue or organ.

What other exams can help?

The treatment of Proteus syndrome is purely symptomatic - ie aimed at controlling the symptoms and avoiding / postponing complications - as there is still no cure capable of canceling, before birth, the mutation responsible for the condition in question.

Symptomatic therapy: what does it consist of?

Which medical figures does the symptomatic therapy of Proteus syndrome involve?

Symptomatic treatment of Proteus syndrome requires the coordinated intervention of several medical specialists, including: dermatologists, cardiologists, pulmonologists, orthopedists and physiotherapists.
In addition, it is important that patients and patients' families receive the support of a subject matter expert psychology, in order to adequately address the pathological condition in progress.

For an incurable and progressive disease such as Proteus syndrome, the prognosis is unfortunately negative.
Fortunately, the disease in question is very rare.

What is the leading cause of death?

The main cause of death for patients with Proteus syndrome is pulmonary embolism with its consequences on the cardiorespiratory level.

Proteus syndrome is a condition impossible to prevent.