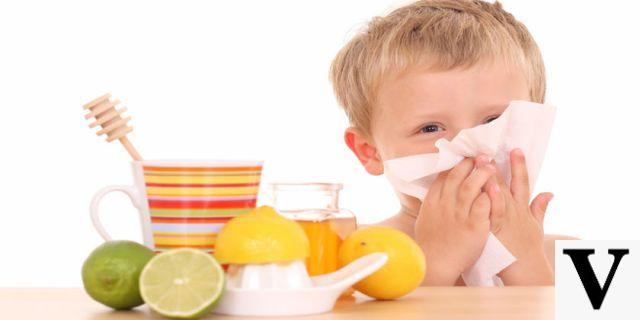 Vitamin C, or more correctly Ascorbic Acid, is a water-soluble molecule that performs numerous essential functions: among these it seems that the ability to prevent and reduce the symptoms of the common cold has been recognized; the subject is however still controversial.
Vitamin C is an enzymatic cofactor of hydroxylation and allows the formation of collagen, adrenaline and aromatic compounds in the liver. Vitamin C is a powerful antioxidant which intervenes in cellular defense against free radicals, promotes the reduction of folic acid as well as the conversion of ferrous iron (Fe ++) to ferric iron (Fe +++). But that's not all ...

For about 50 years the scientific community has split in two in evaluating the clinical usefulness of vitamin C in the treatment and prevention of the common cold. Briefly summarizing the most significant findings, it is possible to define that:

Furthermore, it is important to point out that (citation of the LARN):


At high doses of vitamin C, such as those that are taken for pharmacological purposes (10 or more g / day), gastrointestinal disorders have been found, which however seem to be due more to acidity than to vitamin C itself, as salts buffered no longer give the same effect. Other effects have also been found, such as increased urinary excretion of oxalates and the formation of kidney stones. However, it seems that doses up to 10g / day can be considered safe (Flodin, 1988).

However, the use of vitamin C against colds is still the subject of numerous discussions, therefore, until a compromise between therapy and maximum recommended dose is reached, it is strongly NOT RECOMMENDED its integrative or pharmacological abuse in the fight against symptoms and in prevention. of the common cold