Depression is a serious psychiatric condition that affects the mood, mind and body of patients. During the depressive state, people feel hopeless and experience an overwhelming sense of hopelessness, uselessness and helplessness.

Many hypotheses have been made about the possible cause of depression. One of these is themonoaminergic hypothesis. According to this hypothesis, depression is caused by a deficiency of monoaminergic neurotransmitters (therefore monoamines), such as serotonin (or 5-HT), noradrenaline (or NA) and dopamine (or DA). Therefore, antidepressant therapy must be aimed at filling the deficiency of these neurotransmitters.
Neurotransmitters are synthesized within the presynaptic nerve terminal, stored in vesicles and - subsequently - released in the synaptic wall (the space between the presynaptic and postsynaptic nerve terminals) in response to certain stimuli.
Once released from the deposits, the monoamines interact with their own receptors - both presynaptic and postsynaptic - in such a way as to carry out their biological activity.
After carrying out their function, the monoamines bind to the receptors responsible for their reuptake (SERT for the reuptake of serotonin and NET for the reuptake of norepinephrine) and are returned to the presynaptic nerve termination.
- tricyclic antidepressants they are able to interfere with the monoamine reuptake mechanism. In this way they increase its transmission and allow the improvement of the depressive pathology.

Before 1950 there were no real antidepressant drugs, or at least not in the way we understand them today. The only therapies used in the treatment of depression were based on the use of amphetamine stimulants or electroconvulsive therapy. However, the use of amphetamine drugs was often ineffective and the only result was an increase in the patient's activity and energy. Electroconvulsive therapy, on the other hand - although it was effective - terrified patients because it caused pain.
The first antidepressants were discovered in the late 50s. As with many of the discoveries that changed human life, the synthesis of antidepressants did not arise from design but from chance.
The progenitor of tricyclic antidepressants - theimipramina - was discovered by the Swiss psychiatrist Ronald Kuhn while he was looking for new compounds similar to chlorpromazine for the treatment of schizophrenia.
Between 1960 and 1980, TCAs became the main therapeutic agents used in the treatment of depression.
However, TCAs - in addition to inhibiting the reuptake of monoamines - are also capable of acting on many other systems in the body, causing a wide range of side effects.
With the discovery of more selective antidepressant drugs - such as selective serotonin reuptake inhibitors (SSRIs), selective norepinephrine reuptake inhibitors (SNRIs) and non-selective norepinephrine and serotonin reuptake inhibitors (NSRIs) - TCAs were no longer used as drugs of choice for the treatment of depression.
Today, TCAs play a minor role in psychiatry but still retain some importance.

What it is used for

Tricyclic antidepressants can be used in the treatment of several depressive conditions including:

In addition, TCAs can be used to treat some symptoms (nightmares) of PTSD. For many of these therapeutic indications, however, there are more recent, effective and safer pharmacological alternatives.

Tricyclic antidepressants are capable of inhibiting the reuptake of serotonin and noradrenaline. In particular, they are able to bind to the transporters responsible for the reuptake of these monoamines (SERT and NET), thus inducing conformational changes in their structure. These modifications reduce the affinity of the monoamine for the corresponding carrier (transporter) thus preventing its reuptake.
In this way, the neurotransmitters remain in the synaptic wall for a prolonged period; this causes an increase in serotonergic and noradrenergic signals, allowing an improvement in the depressive pathology.
TCAs do not interfere with dopamine reuptake. 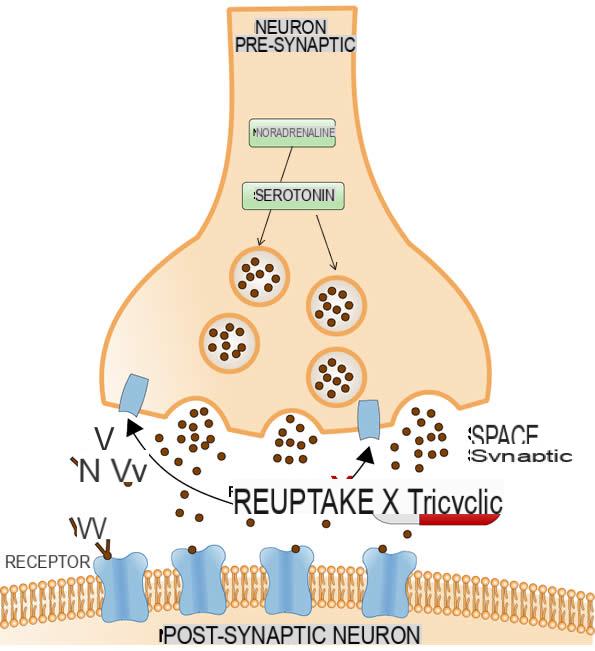 As mentioned above, TCAs - as well as on the reuptake of monoamines - also act on other systems of the body and behave like "five drugs contained in one". Because of this characteristic, tricyclic antidepressants are also referred to as "dirty drugs".
Side effects are mainly due to these secondary actions:


The blocking of all these systems by tricyclic antidepressants causes a long series of side effects, the main ones being:

Tricyclic antidepressants are commonly divided - based on their chemical structure - into five different groups:

Audio Video Tricyclic Antidepressants (TCAs)
Blood pressure: is that at night the most important? ❯