February is still a great time to load up on citrus. Among the top citrus fruits of this month is grapefruit, but the fruit stands are also colored with different qualities of oranges, still very good, and some types of late mandarins.

EndsInstead, the period of the mandarin oranges which, although still present on the market, have now lost most of those organoleptic properties that characterize them when they are in full season.

Oranges are a wonderful fruit, both for the nutrient content and because they represent a particularly versatile and always precious ingredient in the kitchen. Rich in vitamin C, help the body to defend itself from the stress caused by physical, chemical and environmental agents. They have good antioxidant qualities, the orange color is in fact given by the anthocyanins, of which they are rich.

They have a good satiating power, compared to a low calorie content; 100 grams of oranges contain, in fact, about 34 calories.

Some tips on consuming oranges

The oranges… We all know them, we all use them in a thousand different ways. However, let's summarize some tips, which are always useful to keep in mind.

> The freshly squeezed orange juice it is certainly very pleasant, but to benefit from all the qualities of this fruit it would be preferable to eat it in wedges, in order to also take dietary fiber.
> When we eat oranges, let's not peel them too meticulously. The albedo, that is the white part, is a bit bitter but it is the richest in pectin, an important indigestible water-soluble fiber.
> By squeezing oranges, a large part of the fiber is lost, but the orange juice remains an excellent drink, tasty and healthy, also much loved by children. It is, however, important consume it immediately; Vitamin C, in fact, is very volatile.
> He Orange juice is a natural remedy for gingivitis? It can, in fact, be used to gargle when you want to relieve inflammation of the gums.
> In recipes based on oranges, the zest is also often used, which is very fragrant and gives an excellent aroma to sweet and savory dishes. Then, it is preferable to use organic oranges, so as not to bring any pesticides present on the peel to the table.

There are many variety of oranges, which can be distinguished in 2 large groups:

Here are some of the most popular:

> Naveline Orange: light-fleshed, very juicy oranges. They are typically harvested in the months of November and December. The well-known orange of Ribera and the precious Duretta del Gargano belong to the Naveline group.
> Tarot Orange: at the beginning of the season these oranges have the clearest flesh but, as the season progresses, the pigment becomes more and more red. The harvest period is from mid-December to the end of March.
> Moro Orange: red pulp orange which is harvested from mid-December to the end of March.
> Sanguinello Orange: it is a late orange, with red pulp, which arrives on our tables in February and will remain there until the first half of April.
> Oval Orange: the latest of the oranges, appears on the fruit stands when all the others disappear; in fact, it is harvested throughout the spring, from early April to early June. It has a clear pulp and is very juicy.

A very quick recipe with oranges 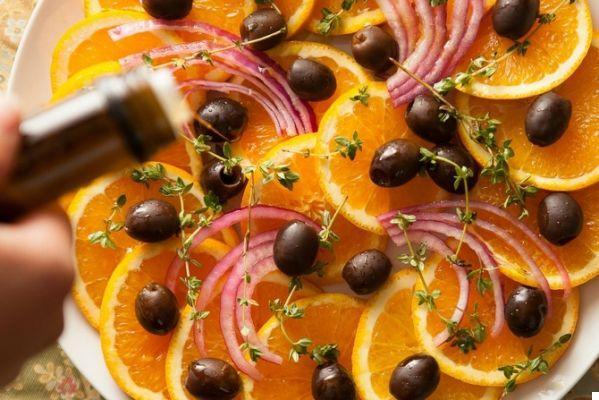 The Tropea orange and onion salad is a very quick recipe, which is suitable as a side dish for many different dishes.

Preparation
The oranges can be left with the peel, as in the photo, or peeled and then cut into rounds; this second option is preferable, also because it makes the dish easier to eat.

Audio Video Top fruit of February, oranges
The properties of ginger in the kitchen ❯

add a comment of Top fruit of February, oranges