The Wave Metaphor: How to Control Negative Emotions Before They Control You 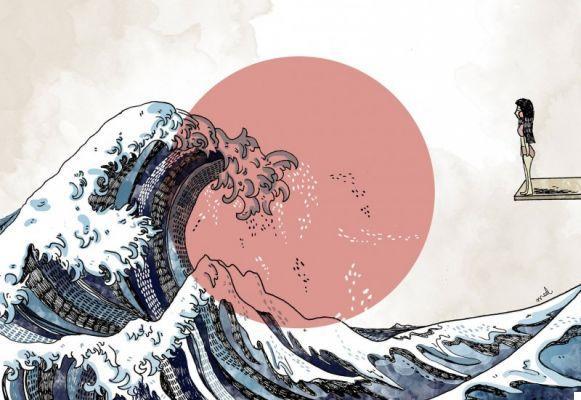 "Small emotions are the great captains of our lives and we obey them without realizing it," said Van Gogh. Very often emotions take over and guide our behavior, take control and lead us to make hasty decisions. later we will repent or throw us into a state of frustration and despair that prevents us from thinking clearly.

In these cases, emotions become our enemies because they take away our inner peace. The harder we try to control them, the more they control us, and we fall into a vicious circle. The solution, to recover emotional balance and protect it against adversity, is to change perspective.

Acceptance and Commitment Therapy, which is based on the idea that our thoughts have enormous power over what we feel and we do not need to force ourselves to change them but only accept them to limit the suffering they cause, proposes us to reflect. on the metaphor of the waves.

The metaphor of the waves

Imagine a white sand beach washed by the waves. There will be small waves that encourage swimming and with their constant rhythm generate a pleasant feeling of peace and tranquility and, from time to time, bigger and more threatening waves will also arrive.

However, the problem is that then another threatening wave will come back to approach. Then you will run away again. Each time a new wave arrives it will seem more threatening than the previous one and, as a result of the effort to escape from it, you will feel more and more tired.


If, on the other hand, you simply immerse yourself in the water, you will barely notice the strength of the wave. Eventually, both waves, small and large, disappear onto the shore. The difference is in the way of dealing with them. We must remember that we do not drown because we are in the water, but because we are submerged without breathing.

The beach with its waves is a representation of what happens inside you, the waves are emotions or thoughts, which cannot harm you, unless you try to fight against them. There is no doubt that seeing a huge wave approaching can be scary, it can make us feel sick momentarily and it can even feel like the end of the world, but eventually the wave will eventually dissolve on the sand.

When we go through situations in life that resemble giant waves, it is understandable that we feel scared, sad or anxious; but harboring negative thoughts will only generate more fear, frustration and a nervous breakdown. Instead of resisting these situations, trying to escape them or denying them, we must simply accept them and try to parry the blow in the best possible way. This is not resignation, it is intelligence.

How to control negative emotions with the wave metaphor?

The metaphor of the waves on the beach will help us distance ourselves from those anxious and irrational thoughts that fuel negative emotions. It helps us to understand that often our suffering does not depend on what happens to us but on what we say to ourselves, on the inner dialogue we have activated. When we give too much importance to our stories and worries, we end up increasing the suffering.

Thoughts and emotions have no more power than what you give them. Eventually, the waves will eventually disappear and the sea will become calm again. This visualization exercise is very effective for dealing with complicated situations when negative thoughts and emotions want to take control.


Take note of your emotions and feelings

Take a step back, metaphorically speaking, so that you can become the spectator of your "inner waves"

Focus on your "inner waves", perceive how emotions come and go

Hold back the urge to block those feelings

Don't try to get rid of it

Don't push them away, but don't cling to them either

Hold back the urge to act, understand that there is no need to act accordingly

Remember times when you felt the same way in the past, remember that those emotions eventually disappeared

Let go of the worries associated with those emotions and feelings

Don't judge what you feel

Fully accept those emotions and name them

Finally, assume that they are like the waves of the sea and learn to flow with them, without them hurting you.

Boredom: why does it arise? ❯

add a comment of The Wave Metaphor: How to Control Negative Emotions Before They Control You