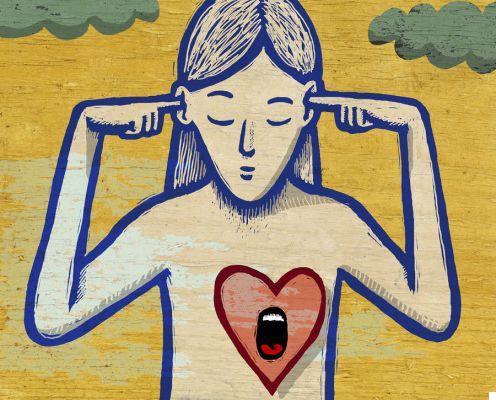 Stress is a modern day epidemic. The rhythm of current life, the social needs and those we impose on ourselves, generate a degree of tension and anxiety that, in the long run, is unsustainable and ends by presenting us with a large bill to pay, even physically. In fact, always being in the fast lane of life is not a good idea, especially for the heart.

A large-scale longitudinal study conducted by a team of cardiologists at Harvard University and Massachusetts General Hospital found that stress increases the risk of suffering from a heart attack. Obviously, this isn't the first research to get these results, all the evidence suggests that stress can have fatal consequences. But this time around, the researchers delved into the underlying mechanism for understanding how stress can trigger a heart attack.

The fault lies with an overactive amygdala

The amygdala is a brain structure linked to emotional functioning. In fact, it can be said to be the command center of fear in the brain. This almond-shaped structure located in the temporal lobe is activated with fear, anxiety, stress and all those stimuli that can seem potentially dangerous.

When the amygdala works correctly it protects us from stress because it is not activated continuously, but only in cases where we are really in danger, to keep us safe. But an overactive amygdala turns into an enemy because it triggers a series of physiological reactions to situations that aren't really dangerous.

The amygdala can become overactive at any time in life, mainly due to sustained stress over a long period. In fact, it has been seen that children who are subjected to stressful situations, such as the separation of parents or when they are left to cry for long periods of time without meeting their needs, develop an overactive amygdala that remains so even in adulthood. .

This new study revealed how an overactive amygdala can cause a heart attack or stroke. In practice, stress not only activates the amygdala, but also stimulates the functioning of the bone marrow and causes arterial inflammation, ideal conditions for a heart attack.

293 people over 30 years of age and with no previous heart problems took part in the study. These people have all been subjected to a series of tests to assess the level of inflammation of the arteries, brain activity and bone marrow activity.

The researchers followed them for four years, a period during which 22 of these people suffered particularly severe heart attacks. In this way it was found that those who showed an overactive amygdala at the beginning of the experiment were more likely to suffer a heart attack or serious heart problems.

The basic mechanism is the following: the amygdala is unable to distinguish between the stimuli that are truly dangerous and those that we can manage with a certain normality, so it ends by categorizing a large part of everyday situations as dangerous. In this way, stress increases and the levels of cortisol, a hormone that causes inflammation, also increase. When this situation persists over time, the inflammatory process narrows and blocks the arteries, limiting blood flow.

At the same time, bone marrow activity has been linked to an increased risk of blood clot formation, another risk factor for heart attacks and strokes. Therefore, it is a combination that can be fatal.

Is it possible to re-educate the amygdala?

The good news is that emotional re-education can restore proper functioning of the amygdala. In practice, the person must learn to consciously distinguish dangerous stimuli from harmless ones.


The first step is to learn to recognize the activation signals that indicate that the amygdala is overreacting, such as an increase in heart rate, shortness of breath, sweating, tightness in the chest, or epigastric jump. . So it is possible to resort to different techniques, from cognitive restructuring to modify the catastrophic thoughts that come to mind to diaphragmatic breathing or relaxation techniques.

Over time the amygdala will learn to distinguish those situations that are truly dangerous from those that, although they can generate some tension and are unpleasant, do not pose a risk.

Stress - Can It Be Contagious? ❯