Science confirms it: Rich people neither notice you nor do they notice your problems 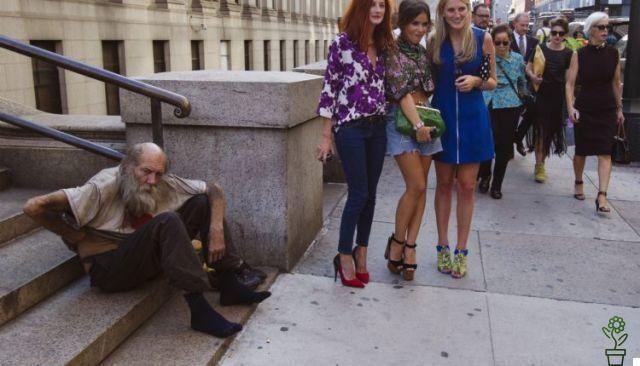 Nobody can pay attention to everything in their path. It's simply impossible, we don't have the ability to do this, our attentional resources are limited, and our brains can only process a certain amount of information at the same time. However, many people try hard to pay attention to others. Unless they are wealthy, then they are more likely to neglect the people around them.

In fact, more and more studies show how money changes the way people view others and their problems. A recent study, conducted by psychologists from the University of New York, shows that wealthy people, unwittingly, pay less attention to passers-by on the street.

These psychologists have analyzed what is called the "motivational relevance" of other human beings. That is, it is assumed that the more value we attach to something the more motivated we are to pay attention to it, either because it presupposes a threat or because it can represent a potential reward.

The researchers analyzed 61 people walking the streets of Manhattan using Google Glass. These people, who were told they were testing the technology, then had to complete a questionnaire in which their social class was assessed.

Analyzing the Google Glass recordings, psychologists discovered that those who classified themselves as wealthy did not lay their gaze on others as far as those who belonged to lower social classes.

The psychologists continued with another series of experiments, this time adopting a more advanced eye monitoring system. On that occasion, the participants had to observe on a screen a series of photographs taken from Google Street View and then indicate their social class. Again, it was found that wealthy people looked at people for a shorter time.

Not satisfied with these results, the researchers wanted to see if the difference in the amount of time each participant spent looking at a person was a result of a conscious decision or a spontaneous cognitive reaction.

To do this they recruited nearly 400 people, who were exposed to a series of photos containing different objects and a face. The trick was that the participants had to identify the difference between two almost identical images, in some the face changed, in the others one of the objects.

In that case, the less affluent participants were much faster than those from higher social classes to notice the change in the faces of the images. This undoubtedly means that human faces had a greater motivational relevance for them.

It is not the first study to come to these conclusions. In another experiment conducted at the University of California, participants were shown two videos: one of them illustrated how to build a patio and the other presented the life of children with cancer. Thus it was found that the wealthiest showed fewer feelings of compassion for the children and their families.

While watching the videos, all participants also wore heart monitors, as it is known that when we emotionally tune in to another person's feelings our heart rate slows down. This reaction was observed in participants belonging to lower social classes, but not in the wealthiest, thus indicating that they are less empathetic.

Other research, also conducted at the University of California, has found that people of high socioeconomic status are not as capable of perceiving the emotions of others, nor do they do it with the same precision, as those belonging to lower social classes. Furthermore, it was also observed that it was not just a bias due to social class, but rather it seems that the richest people pay less attention to everyone, regardless of the social class they belong to. That is, in a general sense, they pay less attention to all the people around them.


Why do the richest "abstract" from those around them?

Psychologists believe that one reason may be that the wealthiest are less likely to value others because they can afford to hire professionals to help them meet their needs, rather than relying on friends, family, or help from others.

According to this theory, the economic difference ends up generating a difference in behavior. Therefore, people of low socioeconomic status would be more predisposed to interpersonal relationships than wealthy people because they understand their importance and are aware that they need others, which makes them more socially skilled.

Of course, generalization always includes the risk of not considering people who are the exception to the rule, but no doubt this series of studies leaves us with a clear message: we need to worry about our way of life because our lifestyle will end up determining not only how we think but also how we feel and relate.

In the world we don't need more spaces that divide us, but more empathy that unites us.

add a comment of Science confirms it: Rich people neither notice you nor do they notice your problems