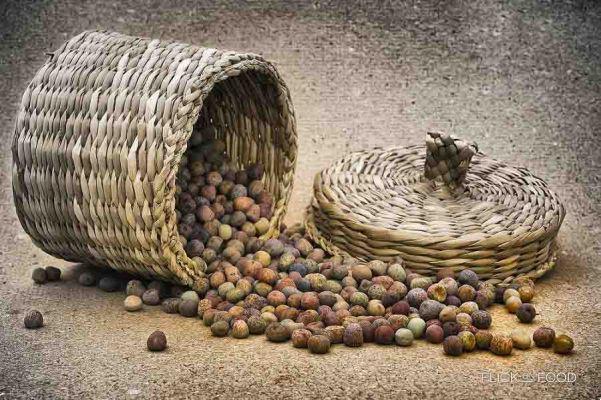 La roveja it is a pea-like: even if its botanical cataloging never took place, some make it fall within a species in itself, Pisum Arvense, others define it as a progenitor of Pisum sativum, the typical pea of ​​our crops.

If you present with a pod initially green, which maturing changes into
a more burnished color also tending to purple. It is sown in March and harvested at the turn of the months of July and August.

Its origins are distant: comes from the Middle East and in ancient times it was grown on the Sibillini Mountains and along the entire ridge
Umbria-Marche Apennines.

It is a rustic legume, resistant to low temperatures, it can grow in impervious conditions and with little water. It was part of the diet of the peasants and shepherds of those regions for create tasty and protein soups.

Cultivation of the roveja however it got lost in the mists of time and it seems that in the postwar period it was almost completely abandoned. The causes are to be found in the difficulty of harvesting the legume and its poor profitability.


The roveja can reach one meter in height and due to the weight of the pods the stem collapses, making mechanical harvesting practically impossible. The sickle harvest is tiring and not justified by a selling price of the product, which is why more manageable crops are favored.

Currently there are four producers in the Civita di Cascia area who grow roveja and who have fought to make it counting among the Slow food presidia since 2006, a project that contemplates the protection of endangered species, a basin for the exchange of information, history, experiences to protect culture and tradition.

The properties of the roveja

La Roveja as a legume boasts a high protein content, contains carbohydrates, mineral salts such as phosphorus and potassium, fiber, vitamin B1. The percentage of nutrients is naturally higher in the dried legume.

As for chickpeas, too the roveja must be left to soak for at least 12 hours to then be used in soups and preparations.

It is also possible to obtain one stone-ground flour, which according to an ancient recipe was used for the preparation of a polenta, called farecchiata, with a bitter taste, combined with a mixture of anchovies, garlic and oil.

I benefits generated by the introduction of roveja in the diet are defined by its components:


> energy supply from proteins and carbohydrates;

> supply of soluble and insoluble fibers for the intestinal well-being, against forms of constipation;


> intake of Omega 3 and Omega 6 to protect good cholesterol.

The roveja does not contain gluten, lactose o histamine therefore it can be introduced in the diet of intolerant subjects or with food absorption problems.

The roveja is useful in the food plan of vegetarians and vegans to support protein needs.

Le contraindications of the roveja concern the presence of fibers, which while on the one hand represent a beneficial contribution to the health of the intestine, on the other they are not suitable for people with colitis, presenting with irritable bowel syndrome, alternating dysentery, as they create flatulence, abdominal tension.

This difficulty is due to insoluble fibers such as cellulose, which cause stomach ache, indigestion, and bloating.

Broad beans and peas - therefore also the roveja - are not recommended in subjects suffering from favism, a particular genetic pathology due to a congenital defect of an enzyme usually present in red blood cells essential for redox processes.

Ingesting roveja in these cases could cause haemolysis, destruction
of red blood cells, resulting in appearance of anemia.

Roveja is also not recommended for those prone to gout, or in any case to those with high levels of uric acid, due to the supply of purines which in some people are disposed of with great difficulty and accumulate in the blood.