Push up plank | How is it done? Muscles involved, common mistakes 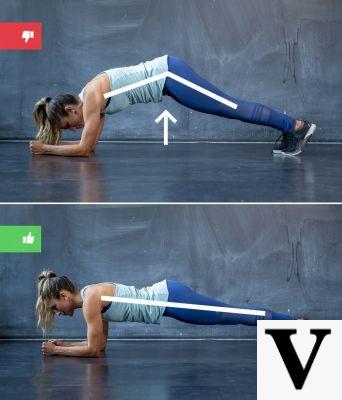 The push up plank is an exercise that consists of a transition from an elbow plank position to a push up position while keeping the feet firmly on the ground.

It is a closed kinetic chain exercise that involves the entire core as stabilizing muscles and those of the shoulders, arms, shoulder blade stabilizers and partly also the pectorals as motor muscles.

This type of exercise is well suited as a burnout at the end of the workout for the upper body or for a session of "push" or has its place even within a HIIT session.

The execution of the push up plank is as follows:

The muscles involved are most of the muscles of the trunk and arms. The protagonists are the stabilizers or the rectus abdominis, the obliques and the transversus; these must work as dynamic stabilizers during the entire movement.

The work of shoulders and arms is not negligible as we find ourselves supporting a good weight on one limb while extending the other.

Shoulder stabilizers, especially the large serratus, have to work hard to keep the shoulder as a fixed point while the rest of the body moves.

If one tries to maintain shoulder protraction throughout the sequence, one should realize the important work that the large dentate has to do.

The shoulder should remain constantly in a position of strength or extra rotated; this allows for a lower risk of compression in the joint as well as greater stability.

This trick also forces the extra rotators to work as dynamic stabilizers. Do the buttocks have to work to keep the pelvis extended and back? to.

Common mistakes can be the following:

Audio Video Push up plank | How is it done? Muscles involved, common mistakes
What Are The Toughest Sports? | The 6 To Know ❯

add a comment of Push up plank | How is it done? Muscles involved, common mistakes