50 people were tested, divided equally into 25 women and 25 men, aged between 17 and 71 years; the study aims to correlate the non-instrumental postural evaluation with the evaluation of emotional stability by means of a psychological test (modified Big Five Questionairre), to see if there are any constants between them.

Postural evaluation included the following tests, the protocol used below:

VERTICAL OF BARRE ', SIDE LEAD WIRE

After having collected all the data, the modified Big Five Questionnaire was administered for the evaluation of emotional stability and the related two subscales: Impulse Control and Emotion Control; the psychodiagnostic test was self-administered, it included 24 questions, with both negative and positive items, to which a value from 1 to 5 was assigned; below the protocol used:

Instructions
The statements in the questionnaire were designed to allow each person to situate themselves with respect to certain personality traits. There are no "right" or "wrong" answers. It is therefore impossible to get a "good" or "bad" score. It is only possible to get a score that describes his personality more or less accurately.
We assure you to treat the answers you provide in the strictest confidence.

To this end, we would be grateful if you would like to follow the instructions below for each statement in the questionnaire:

a) Read the statement and write in the appropriate answer sheet the number corresponding to the answer you have chosen according to the following scale:

b) Be sure to report, for each statement, the numerical value (between 1 and 5) corresponding to the degree to which you believe the statement is appropriate or comes close to describing your personality.

The spreadsheet used by the subject: 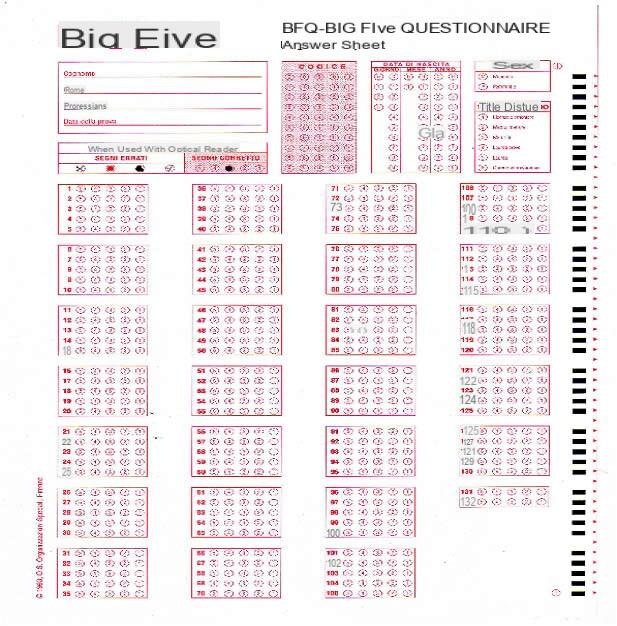 DATA COLLECTION AND ANALYSIS
Then the data needed to carry out the study were collected, which were the following:

The summary table includes: sex, age, posterior Barrè vertical, lateral, rotation on the pelvis, three total scores of the Big Five Questionnaire, after counting the 24 items, according to the official calculation: Total CE (Control of emotions), Total CI ( Impulse Control), Total SE (Emotional Stability).
The average values ​​at the bottom of the graph represent the statistical average of the sample, that is, the average age of 30,2 years; Total EC 37,94; Total CI 36,48; SE total 74,42.
The calculations of the score of the values ​​of the questionnaire items were made by a Clinical Psychologist, with whom we collaborated for the choice of the questions and precisely the correction of the test.


Subsequently, the subjects were divided by categories, with respect to the Barrè vertical in posterior view, crossing the data with the Emotional Stability:

The graph shows that subjects with Mixed dysfunctions (value 86) are substantially more emotionally stable than the sample average (value 74), values ​​which are also interesting for the disharmonics. It should be noted that the neutral subjects in the Barrè vertical are less stable (value 68). According to Lowen's theory of Bioenergetics these values ​​could be given by the fact that the more a person accumulates muscular tensions, you see blockages in the throat, in the diaphragm, etc. and the greater will be his emotional stability, given precisely by the difficulty of externalizing emotions, creating those which Lowen called "character armor".
The fundamental thesis on which Reichian therapy is based is that of the functional identity between muscular armor and behavioral armor, that is, between the physical attitude of a person and the structure of his ego.


With respect to emotion control:

The graph highlights a greater emotional control of subjects with Mixed or Disharmonious pathologies, which unlike the other graph, are almost equivalent, also here we confirm Lowen's theory on muscular tensions.


A basic concept in Reich relates the inhibition of emotional reactivity to the contraction of breathing. As early as 1955 Reich observed that resistance to the analytic process manifests itself physically in the form of an unconscious block of breathing. When the patient was encouraged to breathe deeply, his resistances dissolved and transformed into a flow of repressed materials with its associated sequence of effects and sensations. This observation led Reich to the conclusion that emotional responsiveness depends on respiratory function. By limiting their oxygen intake, a person dampens the metabolic processes in their body and in practice depresses their energy level. By stemming metabolic combustion, it cools the passions of the body. Babies seem to know that holding their breath eliminates painful sensations and suppresses fear impulses.
Aside from the effects on metabolism, limiting breathing also reduces the body's natural mobility. The breathing movement fluctuates like a wave through the body, moving upward with inhalation and downward with exhalation. These movements, which constitute the matrix of emotional expression, are blocked by chronic muscular tension, mainly in the throat, chest, abdomen and diaphragm. Tension in the throat is the result of the inhibition of vocal expression. They constitute an unconscious repression of the impulses to cry, scream and "raise one's voice". Chronic tension of the chest wall is closely associated with shoulder girdle muscle spasticity (which restrains the ability to reach out with the arms). Chest stiffness suppresses the feeling of a strong desire for love that may find expression in reaching out or crying. These feelings are suppressed because repeated disappointments during childhood have made them too painful.


The graph, unlike the control of emotions, shows how the disharmonics have similar values ​​to the ascenders and descendants, while the mixed subjects also prove to be those with greater control, confirming the theory of Reich and Lowen.
Muscle tension or spasticity in any part of the body affects breathing because breathing is a total body activity. Both a stiff jaw and a tension in the buttocks reduce the movements related to breathing and limit the extent of inspiration.
In a broad sense it can be said that, if such tensions are predominant in the superficial muscles of the body, the result is a global rigidity both on a physical and psychological level. When major muscle tensions involve the small and deep muscles surrounding the joints, flaccidity and fragmentation ensue. This produces a lack of integrity both physically and psychologically. Bioenergetic therapy aims to dissolve the chronic muscular tensions of the body and thus to re-establish the natural mobility and expressiveness of the organism.

We detected the percentage of rotations on the pelvis: 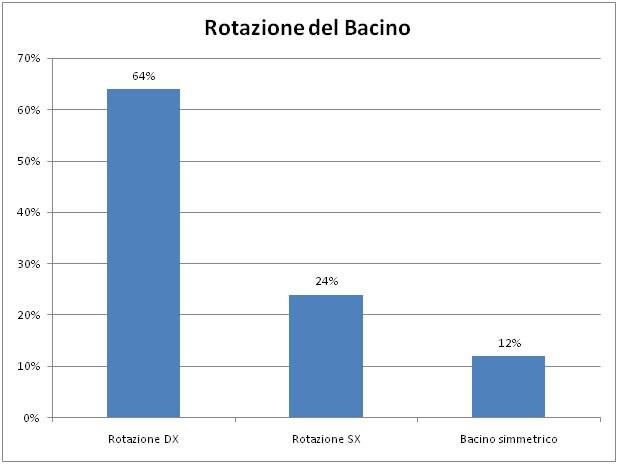 The graph shows the percentages of rotations on the pelvis, 64% of Dx rotations is probably given by the majority of right-handed population cases, therefore with the right side of the body in hypertonus.


And ultimately we crossed the deviations on the basin, with the three values ​​of the Big Five Q. 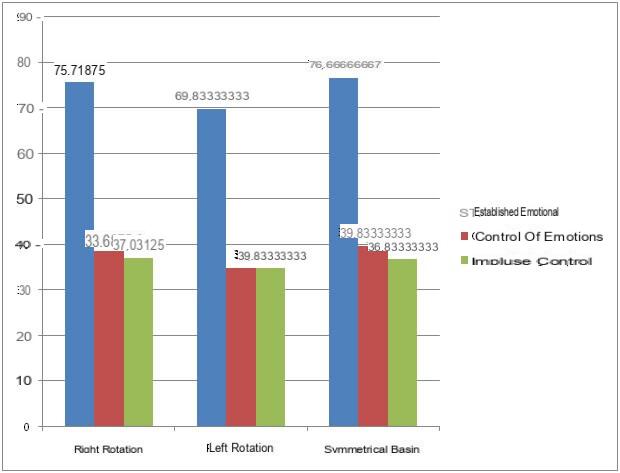 In the graph we notice a difference between the right rotations and the symmetries of the pelvis with respect to the left rotations, which in all three values ​​are lower, according to Reichian theories the left part of the body represents creativity and emotions, while the rationality a right, in fact, those who rotate to the left are less emotionally stable, they control impulses and emotions less.


The study carried out wanted to demonstrate the correlation between the mind (psyche) and the body (soma), how one can influence the other, how muscular tensions are expressions of repressed emotional tensions, which if not treated can lead to tension. a whole fascial chain. It was highlighted that the greater muscular tensions stabilize the emotions of the subjects.
The limits of the study are given by the very young average age of the sample (30.2 years), by the fact that having tested 50 sports subjects, who regularly practice physical activity, we did not find serious postural dysfunctions, the disharmonics collected were all borderline, given that thanks to physical activity they compensated for their deficit; we also found an overtone over an entire emilate. Even the limited sample of subjects was a limitation of the study: even if some interesting values ​​were found, a larger statistical sample, perhaps of a higher average age, and with even sedentary subjects, would have shown different parameters, which paves the way for a more in-depth study.
The posture of an individual is the result of multiple aspects that can be grouped into three major factors: structural, biochemical, psychic. The structural factor is determined by the way in which the body reacts to mechanical stimuli received from the external environment in making all sorts of movements and in maintaining any position, such as sitting, standing, running, walking. The biochemical factor is determined by how the body adapts to the metabolic changes induced by the surrounding environment in activities such as eating, drinking, breathing, smoking, taking drugs, supplements, and so on. The psychological factor is determined by the way in which the body adapts to the emotional changes experienced in everyday life, feelings, time management, ways in which personal and other people's behaviors are interpreted, management of the space that separates oneself from others and from things . According to the way in which these three factors are integrated, the man's posture is in constant and progressive modification. Therefore, in this work, posture is understood as a somatic and behavioral expression of the interactions of mental processes. Just as it would not make sense to divide the body from the mind, in the same way the mind-body-behavior relationship represents an inseparable triad, since every psychic process always determines physical reactions (such as muscle contractions in different parts of the body, modifications of the respiratory rhythm, heart rhythm, temperature, pressure, hormonal secretion, etc.) and behavioral expressions (gestural expressions, mimic expressions, linguistic and paralinguistic expressions, modification of the orientation that one's body has with respect to the surrounding environment, modifications of the distances that the own body has respect to the objects and people around it, etc.) Within this discipline we study both the relationships between psyche and body, and the relationships between behavioral modalities, psychic attitude and consequent adaptation of the organism, as in the posturology behavior is conceived as an extension of the entire comp psychophysical boiled.

"The body and the mind are just different dimensions of the same organism, parts of a unitary expression of the self."
Helen Flanders Dunbar