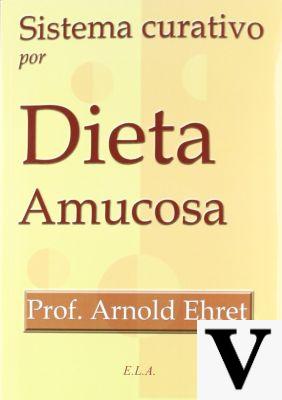 The mucus-free diet is a therapeutic component studied and disclosed about a century ago by a drawing teacher, prof. Arnold Ehret (July 27, 1866 - Friborg); Driven by the desire to resolve all the disorders that were defined as incurable at the time, he undertook an "alternative" training course that led him to found the Mucusless Diet Healing System, also called Ehretism.
According to Ehretism, the mucus-free diet is a fundamental method for achieving complete healing, where healing does not mean the suppression of pain but: "the natural process by which the body repairs itself".
The mucus-free diet is based on the self-regenerative potential of the human organism and on the physiological capacity to gradually remove all impediments, poisons, deposits of fermented materials, toxins, foreign chemicals, mucus and everything else that does not belong to the composition natural body. In this way, again according to what the supporters of the mucus-free diet cite, germs, bacteria or viruses would not take root, but would simply transit.
Put simply, following the mucus-free diet means eliminating all foods that create or provide mucus from the diet. Mucus is commonly associated with nasal secretion, facial sinuses or intestinal enterocytes, however, in the Ehreteic healing system, mucus also refers to many other viscous substances: cholesterol, phlegm, phlegm, etc., which enter the body with food they end up "encysting" in the colon from where they can reach all other organs and systems.
According to Ehret, through the healing method of the mucus-free diet it is possible to remove the mucus responsible for diseases allowing the body to heal itself; the principles of this eating style allow pathological remission, maintenance of the state of health and optimization of functions in your country and secondary ones.
In short, although the mucus-free diet cannot be dissociated from the whole system, in itself it represents a real dietary therapy; ultimately, Ehret suggested:

First of all, it should be specified that the mucus-free diet dissociates itself from any conventional scientific basis, therefore, as such it must be treated.
The web premise of the mucus-free diet alone should be enough to discourage further study and while considering myself mentally open or free from any prejudice, I admit that I hesitated before starting to read the medical treatise dating back to the early 900s written by Arnold Ehret, a professor of drawing. Without shame, I admit I made an unforgivable mistake ... certainly next time I will follow my instincts!
In my opinion, Ehret and co. they discredit traditional medicine by calling it too focused on relieving symptoms and not paying attention to pathological causes; at the same time, Ehretism reveals and divulges the cause of all the evils that afflict humanity, mucus, proposing its universal panacea: a mucus-free diet. As obvious as it may seem, I underline that a similar attitude, in addition to being very unprofessional (if we can speak of professionalism) and also a bit offensive, is extremely uninformative and diseducative. Medical science has always focused first of all on the search for etiopathological causes, while the use of drugs is weighted on the basis of clinical and symptomatic conditions; certainly and inevitably, many mistakes have been made in medical history, but those mistakes have been worked on until reaching miraculous capabilities such as organ or bone marrow transplantation.
The mucus-free diet focuses on limiting the introduction of mucus with foods (?) And the purifying potential of others; Ehret defines mucus as a foreign substance, while it is a specific secretion of some histological tissues having a well-determined function (for example, as a barrier against bacterial aggression, or as protection from chemical-physical stress) and which subsequently inflammation can be produced in excess. According to the mucus-free diet, pathogens infect the organism because they are retained inside; on the contrary, in reality they DO NOT infect the organism precisely because they are blocked and subsequently expelled (for example, with cough or faeces). In the organism, mucus is indispensable and without it it would not be possible to maintain a certain overall integrity, risking to contract: gastritis, gastric ulcer, duodenal ulcer, intestinal irritation and enteric neoplasms, infections and neoplasms of the respiratory tract, etc.
This diet, instead of being devoid of mucus, seems baseless; eliminating all those foods can certainly be useful for a reckless weight loss characterized by innumerable nutritional deficits, but it certainly does not represent a specific cure nor a universal therapy. Personally, I strongly advise against adhering to the mucus-free diet and even just reading the text.