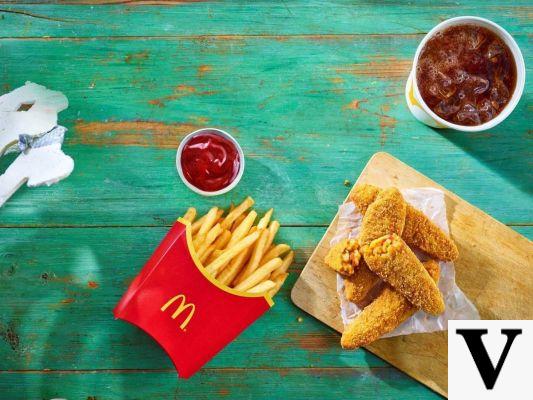 Probably vegetarians and vegans who know McDonald's will not be attracted by the news, but in January the multinational will launch the Veggie Dippers, its first complete vegan meal that has already been approved by The Vegan Society.

There were already the BigMac in the vegan version and the vegan McNuggets sold in Norway, now on an experimental basis in the UK there will be Veggie Dippers, but the well-informed, say that soon we will also find them in the chain your country.

What are Veggie Dippers? Snacks that do not contain meat and derivatives. Basically, a breading with red pepper, rice, dried tomato pesto and peas which will be served with fries and a soft drink at a cost of 4.99 pounds, about 6 euros. But they will also be available in the Happy Meal version alongside the vegetarian Happy Meal already on the market, together with vegetables, a sachet of fruit or chips, water or other fruit drink.

There will then be another version of these snacks made with tomato, lettuce, onion and red pepper and McDonald's swears they will be prepared carefully so as to avoid any contamination, thus making the completely vegan product.

And even though Thomas O'Neill, McDonald's head of food marketing in the UK and Ireland, says, "Over the past 12 months we have seen an 80% increase in customers ordering vegetarian options at McDonald's," we always remain a little skeptical and the idea does not excite us.


Those who choose to live in a sustainable way and make a conscious consumption choice are unlikely to opt for a meal at McDonald's, a globalized chain that does not favor local varieties.


What do you think?

Audio Video McDonald's launches 100% vegan Veggie Dippers: that's what's inside
Mc Donald's winks at vegetarians. Will he be able to seduce them? ❯