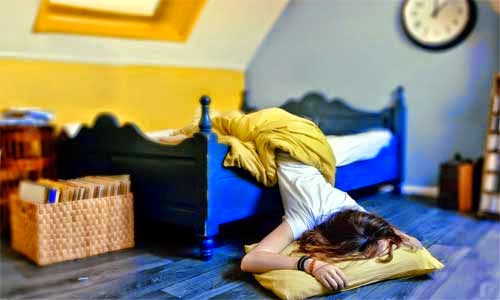 Sleep is very similar to a bank account, that is, you need a minimum balance. You can exceed the threshold for a couple of months but always until the following month you return to deposit funds to get back in the black. If you don't, we are in trouble. Basically, this is the mechanism behind what is known as the "sleep debt“, Which is simply the difference between the hours of sleep our body needs to recover and the hours we actually sleep. When the count of the hours of sleep goes into the red, our body suffers rather serious damage.

According to some experts, the minutes and hours taken away from sleep accumulate and cause various health problems. At this point the question is: can we recover the sleep debt we have accumulated or are we inevitably condemned to pay the consequences?

Sleep always pays off its debts

A recent study conducted at the University of Pennsylvania sought to find out how sleep deprivation affects our body and performance and also asked the question of whether the effects can be reversed. In fact, we now know that sleep deprivation causes sleepiness, affects attention, increases stress levels, and triggers long-term inflammatory processes that could even have fatal consequences.

Participants in this study were first monitored for four nights in which they slept for eight hours. In this way, it was possible to establish a basis for obtaining data on normal levels of attention, stress, sleepiness and inflammation.

In the second phase, the participants spent six nights during which they slept six hours (enough time for those in an average job, or for a family that leads an active social life). They then slept 10 hours each night for three nights to recover the lost dream. During the study, health and some of the cognitive functions were assessed.


The analysis showed that the six nights of sleep deprivation had a negative effect on attention by causing daytime sleepiness and increased inflammation levels (measured by the amount of interleukin-6 in the blood, a marker of inflammation levels in whole body tissues).

According to the sleep debt theory, the negative effects of the first six nights of sleep were minimized thanks to the last three nights. In fact, the sleepiness disappeared and the IL-6 levels returned to baseline. Levels of cortisol, a hormone linked to stress, fatigue and irritability, also showed a notable reduction. However, it's not all pink and flowers.


The person's attention levels did not recover and the feeling of fatigue continued to be present. This means that even if from a biological point of view it seems that lost sleep can be recovered, from a cognitive point of view we do not work in the same way.

Researchers have not found an explanation for this phenomenon but perhaps the answer may lie in the cumulative effect of toxins in the brain as sleep is known to have a purifying effect on the nervous system.

What is the cause of nightmares?

The best white noise generator for sleeping in 2022

7 common nightmares and their meaning

Our nightmares revolve around these 11 points

add a comment of Lost Sleep: Can We Recover It Without Suffering Damage?