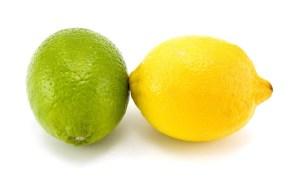 Lime e lemon they run the risk of appearing to be the unripe version of the other, but this is not the case.

It is two different types of citrus fruits, with slightly different characteristics, uses and properties. Let's make a comparison between lime and lemon together.

Lime and lemon belong to the same botanical family, or that of Rutacee.

Lemon (Citrus lemon) indicates both the fruit and the plant, while the tree that has i lime as fruits is called limetta (Citrus aurantifolia), the only citrus fruit that grows in a tropical climate (and in Egypt). As for the harvest period, the lemons are harvested when fully ripe while the limes when they are still green, since they are much more juicy.

Comparison of lime and lemon:

> Fruit: both have an oval shape but the lemon on average has larger dimensions. As for the color, the lemon is yellow while the lime - as we know it - has a green skin (in reality, if left to ripen on the tree it becomes yellow-orange)

> Acitric acid: the pulp of lime contains a greater quantity (up to 6%), resulting much more sour and fragrant than that of lemon

> Vitamin A: il lime contains more than double than that present in lemon (50 International Units against 22).

> Nutritional values: they are very similar, between lemon and lime, apart from the significant differences in Vitamin C, A and Citric Acid, both provide about 30 calories and about 3 grams of fiber per 100 grams.

> Use in the kitchen: Lemon and lime are rarely eaten as fresh fruit, but they are both widely used in cooking for flavor main courses based on fish, fresh fruit salads, jams and marmalades, fruit juices. Lime juice is also used for prepare famous cocktails, like the Daiquiri, while the liqueur is made with the lemon peel Limoncello typical of Campania.

> Other uses: Lemon and lime juice can be used for hygiene and skin care. Lime and lemon facilitate digestion increasing the secretion of gastric juices, thanks to the presence of citric acid.

Lime (Citrus aurantifolia) is one species native to Asia. It is an irregularly shaped sapling (up to 3-5 meters high) with thorny twigs, oval leaves, rounded at the base and pointed at the apex, light green. The inflorescences have from two to seven small fragrant white flowers, who come produced at different times of the year.


I fbroken are slightly oval, green or yellowish-green, even if some varieties have yellow fruits when ripe; the pulp is acidic and the skin is thin and rich in essential oils.


Lime and lemon, two legumes in comparison: lemon in short

Lemon (Citrus limon) is native to India and Indochina. According to some studies, the lemon plant was born from an ancient hybrid between the cedar and the pomelo, even if the lemon has been an autonomous species for centuries. According to other scholars, however, it would be a natural hybrid between cedar (Citrus medica) and lime (Citrus aurantifolia).

The lemon tree is up to 6 meters tall, with dark green leaves above and lighter underneath. The very fragrant flowers are solitary or in pairs and in favorable climatic conditions they are produced almost all year round. The fruits are oval or oblong, with pointed tips: normally the skin is yellow and thick, but there are variegated varieties of green or white.

The lemon is a species that blooms several times a year: the main flowering flows are in spring, with the production of winter lemons, and in September, from which the so-called verdelli (lemons that ripen in the following summer) derive. Unlike other citrus fruits, lemons can ripen even when detached from the plant.

Read also Lemons and their cultivation >>

add a comment of Lime and lemon, two citrus fruits in comparison