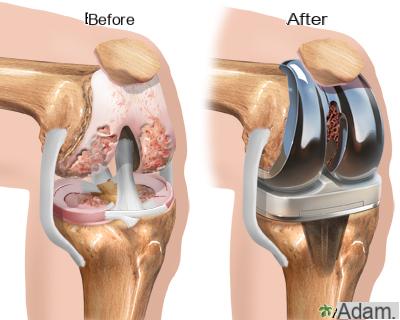 La knee prosthesis it is implanted when the joint, which unites the femur and tibia, is irreparably damaged. With its application, it aims to restore some joint mobility and relieve the painful sensation, which characterizes severe knee injuries.
Knee replacement surgery is invasive and requires appropriate rehabilitation, but the results are more than comforting. The patient, in fact, can return to lead a normal life, without particular limitations.
There are two models of knee prostheses. The choice of the most suitable model, which is up to the surgeon, is mainly based on the age and general health of the patient.
Research in the field of medical technology has a triple objective: to extend the life of the prostheses, improve implantation techniques and reduce the invasiveness of the intervention.

L'articulationthe joint capsule, the knee it is placed between the femur (located above), tibia (below) and patella (anteriorly) and is made up of various elements, all equally important in allowing movement and supporting the weight of the human body. Among these, the articular cartilage, which lines the bone ends and prevents wear from rubbing. There is, then, around the capsule, the so-called synovial membrane, which produces a lubricating fluid, called synovial fluid; it reduces friction between the femur and tibia and facilitates movement of the tendons and ligaments. The latter are indispensable, because they allow flexion of the lower limb (during a walk, a run, etc.) and provide stability to the joint. Finally, the two menischi: lateral and medial. The menisci are structures made of cartilage. They occupy the upper part of the tibia and serve to absorb the stresses that the femur and the whole body exert on the tibia itself. The menisci, like ligaments and tendons, also provide stability to the joint.

When is it necessary to intervene?

Like every joint in the human body, even that of the knee can be damaged. The most common symptoms are: pain, swelling e poor joint mobility.
If the joint damage is minor, the severity of these symptoms is modest and with the appropriate conservative countermeasures, such as physiotherapy or the use of anti-inflammatories, excellent results can be obtained.
Conversely, when the damage is so severe that any daily activity is impossible, surgery should be considered. Surgery, in fact, offers several possibilities: the knee prosthesis is one of them. Through it, the old articulation, no longer functional, is replaced with an artificial one.

THE MOST FREQUENT CAUSES OF JOINT DAMAGE

The most common causes, which require knee replacement surgery, are:

Osteoarthritis, rheumatoid arthritis and haemophilia lead to progressive joint damage. Initially, it is possible to opt for a conservative treatment, aimed at relieving the symptoms. Subsequently, this therapeutic approach is no longer sufficient.

Other pathological conditions are also treated with prostheses, which, although less common, equally cause progressive damage to the knee.
One of these is the gotta, which inflames the joints due to the accumulation of uric acid.
Another is the avascular necrosis, due to alcohol abuse.
Still another is represented by repeated injuries to ligaments and tendons of the knee.
Finally, there are the bone dysplasias and knee deformity. Both cause an anomalous arrangement of the articular bone elements, which progressively lose their mobility and integrity. They are congenital disorders, that is present from birth, with often disabling results.

HOW IS THE JOINT DAMAGED?

Osteoarthritis, and like it also the other causes mentioned, lead to a deterioration of the articular cartilage. Without this protective cartilage, the femur, tibia and patella "rub" together and wear down the (distal) extremities involved in the joint.
More or less serious damage to the cartilage can thus be observed; a young adult, for example, may have partial injuries. Therefore, each patient shows his own clinical picture, which must be carefully evaluated, before intervening with a prosthesis.

WHO UNDERGO THE INTERVENTION?

The individuals who undergo most knee replacement surgery are the elderly between the ages of 60 and 80. These, on the other hand, are also the most affected by osteoarthritis and rheumatoid arthritis.
The same surgery, on young adults with severe joint damage, is not the best choice. Other less invasive and more lasting solutions are preferred. As will be seen, in fact, the knee prosthesis has a duration of 15-20 years; then a second operation must be carried out for replacement; replacement, which, however, is much more complicated than the first intervention.

WHAT ARE THE FINAL OBJECTIVES OF THE INTERVENTION?

The objectives of the knee replacement surgery are:

The methods of intervention

There are two types of knee prostheses to choose from:

The choice depends on the severity of the joint damage: if the bone lesions, ligaments, tendons, etc., are severe, we resort to total prosthesis; when, on the other hand, the knee still has healthy areas, we resort to partial prosthesis (o single compartment)

Severe knee joint damage requires a total replacement. In fact, in these situations, osteoarthritis (or any of the other aforementioned causes) has worn down the extremities of the femur and tibia so thoroughly that they must both be replaced by artificial metal structures.
Deep and long-standing damage can also affect the patella; consequently, total prostheses were developed which are also suitable for this eventuality.
The graft of a total knee replacement is, by far, the most practiced surgery.

PARTIAL (OR SINGLE-COMPARTMENTAL) PROSTHESIS IN THE KNEE

When there is only one damaged or worn bone end, a partial prosthesis is applied.

Since this is an infrequent pathological circumstance (usually, the entire joint structure is affected), the partial prosthesis is rarely implanted (only one in four people with osteoarthritis). In addition, it also has disadvantages, which will be discussed later.

THE DURATION OF A PROSTHESIS

A total prosthesis lasts about 15-20 years.
A partial prosthesis, on the other hand, has a shorter life: about 10-15 years.

The period before the operation can be fundamental to shorten the post-operative recovery.
Walking, for example, is of great benefit, both to the muscles and to the ligaments.
Another very important recommendation is to perform some muscle and tendon stretching exercises for the lower limbs and muscle strengthening for the upper limbs. The latter, in fact, will be called to hard work when using crutches.

During the pre-operative phase, the patient undergoes various instrumental radiological and electrocardiographic examinations.
The aim is to get to know the patient thoroughly, clarifying his general state of health, the precise anatomy of the knee (the prosthesis is made to measure), etc. Acquiring this information increases the success rate of the intervention.

How do you do this? The procedure

A surgeon expert in knee orthopedics is responsible for performing the surgery, with the help of consultants and an anesthetist. It is of fundamental importance that the operating surgeon knows the patient's medical history and the exact anatomy of the knee on which the prosthesis will be implanted. In fact, in order to function correctly, the prosthesis must be custom built.

Knee replacement surgery (both total and partial type) is usually performed in general anesthesia. However, it is also possible to opt for a 'epidural anesthesia, in which only the lower body is numb to pain. Those who choose this second option, however, are not conscious, since they must take strong sedatives.

After the anesthesia has taken place, the actual operation begins. The procedure can last from one to three hours and involves three pivotal moments:

The incision is made where the patella resides, which is moved to one side, to have free access to the entire knee joint implant. At this point, we proceed with the removal of the worn ends of the tibia and femur and with their replacement with metal plates.

Between the two plates, which are glued to the bones with a substance called "cement", a spacer element (or insert) in plastic is inserted. It plays the same role as the articular cartilage, avoiding direct rubbing of the femur and tibia.
If the patella is also damaged, a metal plate is applied on the inside of the patella.
At the end of the procedure, the incision is closed and sutured.

The operation involves a minor incision, compared to the previous procedure described, and the removal of a single bone portion, or of the femur or tibia.

The partial prosthesis is less invasive than the total one. In fact, it requires shorter healing times, since the incision is shallower and the rehabilitation process is shorter.
However, it has significant disadvantages, which lead the surgeon to opt for the total prosthesis in most cases.

WHICH PROSTHESIS TO CHOOSE? THE SELECTION CRITERIA

The choice of the type of prosthesis to use is up to the surgeon, who bases his considerations on the following elements:

Due to its importance, theage of the patient deserves special attention.
For the elderly. If the joint damage is limited, even a partial prosthesis may be suitable, the graft of which is less debilitating and invasive. In fact, although this solution is less lasting, the elderly patient is unlikely to undergo a second operation to replace the worn prosthesis.
For the young or middle-aged patient. If the joint damage is severe and it has been found that there are no such effective remedies, the most suitable prosthesis is the total type. This is the only way to postpone replacement surgery for as long as possible.