Is it possible to love several people at the same time? 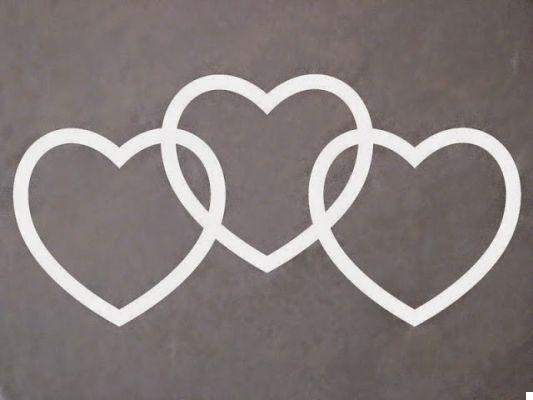 Today it is called polyamory. Maybe you know someone who has happened to, or maybe it has happened to yourself: people who live with their partner for years and, at the same time, have another relationship or more than one. And they claim to love everyone equally. Is it possible to love several people at the same time or is it just an illusion?

In our culture, monogamous par excellence and by order of the Catholic Church, it is frowned upon to have two relationships at the same time, even when it is not a question of infidelity. In fact, polygamy or polyamory is a lifestyle not widely accepted. We have on our shoulders too many centuries of tacitly accepted social rules and norms from which it is difficult to break free.

So, if from an early age we were taught that we can have only one partner, we also hypothesized consequently that we can love only one person. However, many people often seek help from a psychologist because they love two people at the same time and don't know what to do. The interesting fact is that these people don't always feel the burden of infidelity, but rather experience an inner conflict because society requires them to make a decision that they are unable to make, because their hearts are divided.

In fact, our heart, to put it mildly, does not include an installed meter. We don't stop loving because we already love another person. In reality, if we think about it, the only love that claims to be exclusive is that for the partner, when for example the love for parents, children or animals is not. So, if we are able to love many people, is it not possible to also love two partners at the same time?

Numerous studies have shown that when we fall in love, great chemical changes occur in our brain, changes that lead us to act and feel differently and can make it so that at that moment we only see the person who is the object of our desire. However, this is the infatuation phase, the initial phase where the feelings are very intense and we are overwhelmed by rushes of adrenaline, dopamine and, in particular oxytocin, the hormone that makes us feel connected to someone. of infatuation, these hormones return to normal levels and we develop what is called mature love, which is characterized by greater commitment and, through which the relationship is stabilized. Therefore, it is very likely that we can feel in love with a person and having mature love for one another at the same time, and if both relationships continue over time, we can come to love both equally, or at least similarly.

The key is not in love, but in happiness

In reality, the key is not to ask whether it is possible to love two people at the same time, but whether it makes us happy and makes our partners happy too. In the case of plural love, in which there is the consent of all parties, happiness is possible. However, when there is infidelity or one feels uncomfortable in this situation because of one's moral values, loving two people turns into a conflict that does not give any happiness.
Do you love or depend? 3 differences between mature love and emotional addiction ❯

add a comment of Is it possible to love several people at the same time?