Handlebar Pullover | Performing the Exercise in the Gym

I certainly exercise a lot fascinating and scenographic but how to do it safely? What groups does it involve? What are the variants?

It is a complex gesture to manage and insert into your programming but at the same time a weapon that can be extremely useful for working the muscles involved in different angles.

Performing the Exercise in the Gym

The exercise, practiced on a flat bench can be made arranging itself along the line of the same or across going to support only the upper part of the back or the shoulder blades. With this last position it is possible to position the pelvis lower than the back and shoulders [1] [2] [3].

In addition to the classic version they exist different variants which can be used:

1. Pullover monoarticolare. It can be done with arms flexed or straight. In the first case you will have the advantage of lifting greater loads. The other way around with the pullover with outstretched arms there is less intervention of the synergistic muscles and therefore a greater involvement of the target muscle groups is allowed.

2. Multiarticolare sweater. As mentioned above, this variant provides for an extension of the elbow in the concentric phase and its flexion in the eccentric phase. Basically you will have an intervention of the elbow extensors and tend to have the possibility of lifting greater loads compared to the single-joint versions.

3. Declined pullover. It is trivially a declined bench performance [9]. The advantage of this variant is to maintain tension even in the final part of the concentric phase (ie when the weight is perpendicular to the chest) which is not allowed by the execution on a flat bench. The same variation applied to the cables brings the exercise closer to a pulldown with outstretched arms with consequent (relative) greater intervention of the great dorsal [18].

4. Pullover to the cable. This variant has the advantage of maintaining tension throughout the ROM. Here too you can use the flat bench [10] or the declined bench [12]. In fact, the movement (ie the joint trajectory) of the arm in the sagittal plane is analogous to the pulldown with straight arms, a specific exercise for the great dorsal [13] [14] [15]. Another possible execution (simulating the machine) is sitting on a bench (with your back to the turret) using the high cable [11] [9] [16].

The exercise, as we have said, leads to an involvement of the large pectoral and backbone [6] [17]. It is interesting to note how, from electromyographic studies, we have seen a greater participation of the former compared to the latter when performed with free weights while a prevalent intervention of the grand dorsal when performed with cables or machinery [6] [7]. 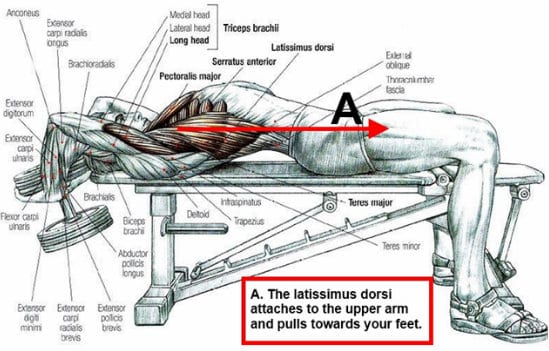 This difference is due to a homogeneous distribution of resistance over the entire ROM (Rate of Motion), the degrees of mobility allowed by a joint, when the execution takes place with cables and machinery. In the latter case, as mentioned above, there will be a greater participation of the great dorsal in the last part of the concentric phase, conversely, a greater intervention of the pectoral in the last part of the eccentric phase. In the multi-joint version we also have an involvement of the elbow extensors.

The big advantage of this exercise is that it allows to stimulate the pectoralis major from a different angle with respect to the work plane foreseen by openings and thrusts [7]. Another interesting aspect is the stimulation of the extra-rotators of the shoulder with their consequent antagonism with respect to the anterior deltoid, pectoral and large dorsal surgery typically overdeveloped in bodybuilders and responsible for postural imbalances (internal rotation of the humerus) [18]. 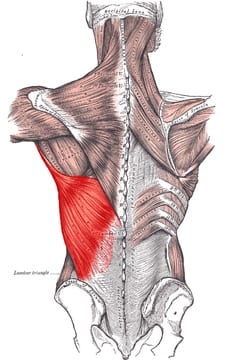 The pull-over is an exercise that presents dangerous profiles, especially where it is performed with high loads.


First of all in the lower back area, affecting the intervertebral discs that would be damaged due to hyperextension of the lumbar area [19]. The first advice therefore is to try not to accentuate the curve beyond its physiological line (for example by placing your feet on a rise). Logically, this problem does not arise when the cable or machinery variant is used.

A second critical point is the scapulohumeral joint. In fact, during flexion, contact between the superior glenoid cavity and the rotator cuff can occur with a consequent risk of impingement. In this case, if there are problems at the level of the shoulder joint, the ROM must be limited by excluding the part of the trajectory that involves hyperflexion of the arm.

Finally, there may be a risk at the cervical level where the head is not supported (execution on the bench sideways).

How to Insert It in a Card

Very well, after this long theoretical introduction we get to the practical one and we pour out some “take-home messages”. How do I incorporate the pull-over into my programming?

1. Pectoralis major workout. We prefer the use of free weights (dumbbell or barbell) and let's focus on the final part of the eccentric phase with possible hyperflexion stop. We use the declined bench. If in the same session we train or recall the triceps, multi-joint execution could be a good variant.

2. Workout for the great dorsal. In this case, the use of cable or machine variants is the best solution. Let's focus on the final part of the concentric phase by activating the back in contraction well. We can also use free weights, in which case, to maintain tension in this part of the ROM, we choose the declined bench press. Again, if we train or recall the triceps in the same session we can use the multiarticular variant. However, it must be said that these will still work isometrically.

3. Workout full-body/upper-body. It will be logical that here we can indulge ourselves as we prefer. We use all the ROM, let's focus on different angles to give a greater focus to certain muscle groups, choose different angles and executions, etc.

4. Other tips. Personally I recommend using it as the last or penultimate exercise of the session. This will allow you to find yourself with pre-fatigued muscles and therefore to use lower loads with a consequent lower risk of injury and greater possibility of concentrating work on the target muscle. Another tip is to pay extreme attention to breathing in order to obtain a global synergy aimed at activating the muscles concerned in the best possible way. 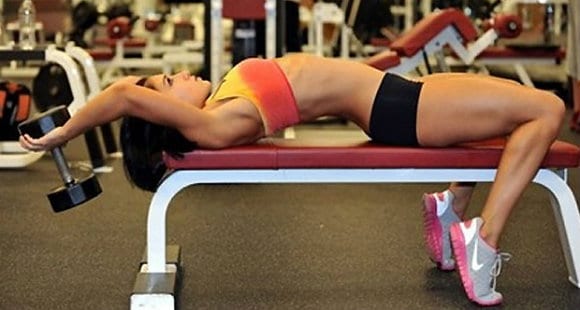 The pullover is a great exercise, difficult to manage of course, but, in any case, it is extremely effective and an excellent variant for finding different working angles. Always pay attention to the safety of execution, which in this case can be easily compromised by an inaccurate performance. For the rest, the rule is always the same .. mix it up!