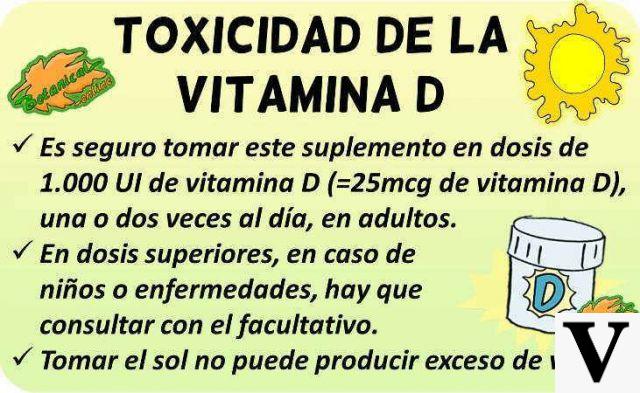 Hypervitaminosis is a morbid condition caused by vitamin excess, which generates intoxication of the organism.

There are various types of hypervitaminosis, depending on the type of vitamin taken in excess; however, it should be noted that not all vitamins cause intoxication and that the relative excess can have very different consequences between one vitamin and another.

The discovery of the morbid states of hypervitaminosis is quite recent, since in the past it was unknown that these nutrients, more often deficient than in excess in the diet, could in any way harm health.

Vitamin D is a fat-soluble nutritional factor with hormonal-like action. In nature it is widespread in various chemical forms, but the metabolically active one is calcitriol.
Vitamin D performs various functions, among which the most important is the regulation of calcium and phosphorus in the body (but it is also necessary for the differentiation of some cells, for the immune system, etc.).

Calcium and phosphorus are essential for the skeleton, for the teeth and also for the muscles.
A lack of vitamin D can lead to bone deformities such as rickets in children and osteomalacia in adults; the lack of vitamin D and calcium in youth, responsible for the failure to reach peak bone mass, can favor the onset of osteoporosis in old age (especially in the presence of significant hormonal alterations related to menopause).
Most of vitamin D is synthesized in the skin starting from cholesterol, thanks to the action of UV rays (in mid-latitudes, from May to September the body is able to satisfy its own need for vitamin D on its own and fully) .


In the autumn-winter period, or in any case in places where sun exposure is limited, it is necessary to increase the intake of vitamin D with the diet. The most relevant sources are: fatty fish, fish liver and related oil, egg yolk, certain mushrooms and fortified foods.
The dietary requirement for vitamin D is between 8,5 and 10 μg / day.

Is Too Much Vitamin D Bad?

Excess vitamin D can be harmful to health. Obviously. this depends on the actual extent of the excess, that is, on the quantity of vitamin D capable of triggering intoxication in the organism.

Excess of vitamin D and intoxication

The causes of vitamin D intoxication are almost exclusively pharmacological. The nutritional component also plays a fundamental role but, as often happens, only when the diet includes supplements and fortified foods.

Symptoms of vitamin D hypervitaminosis are:

The clinical signs of hypervitaminosis D are:

What Happens When You Get Too Much Vitamin D?

As we have said, taking drugs and / or supplements of vitamin D in excess for a long period of time can establish specific hypervitaminosis and the consequent intoxication.
In correlation to the symptoms and clinical signs already described, due to the accumulation of calcium in the blood (hypercalcemia) coming from the bones, serious complications can arise, such as:

To treat vitamin D intoxication, it is necessary to stop or reduce its intake with drugs and supplements.
It is not necessary to change the diet, although the elimination of all fortified foods could help to restore blood homeostasis of vitamin D and consequently of calcium.

By choosing to take supplements and foods fortified with vitamin D as a supplement to the ordinary diet, it is advisable not to exceed 10 μg / day.

With quantities greater than 100 μg / day the chances of side effects are higher than normal. This applies to healthy adults, pregnant and lactating women, the elderly and children between the ages of 11 and 17.

The limit for infants under 12 months is 25 μg / day.
Note: sick subjects may have a lower tolerance and suffer intoxication at lower doses. If in doubt, consult your doctor.

The dose of vitamin D required for therapy to combat rickets is 250 μg / day (10.000 IU of vitamin D3 or cholecalciferol); consider this value as the maximum safe use limit for tolerable daily intake (UL).

Recommendations of the competent bodies

The news organizations are partly responsible for the few cases of vitamin D hypervitaminosis. Vitamin D deficiency has been responsible for serious public health problems for many years. Today, aware of the diseases that can depend on its nutritional deficiency, we tend to over-emphasize the importance of food supplementation. Recall that food supplements and fortified foods are over-the-counter products available in supermarkets, pharmacies without a prescription or in parapharmacies. They are therefore widely available and within everyone's reach.
For example, the UK "Department of Health" recommends the following:

In addition, the same recommends taking a daily supplement containing 10 μg of vitamin D throughout the year if:

Recommendations of this kind can easily be overestimated and there is often an excessive intake of vitamin D. However, it must also be admitted that the criticality limit, already corrected by default, is about 10 times higher than the recommendations of the guidelines.

add a comment of Excess of Vitamin D - Toxicity