Emotional Seizure: What happens in our brains when we lose control 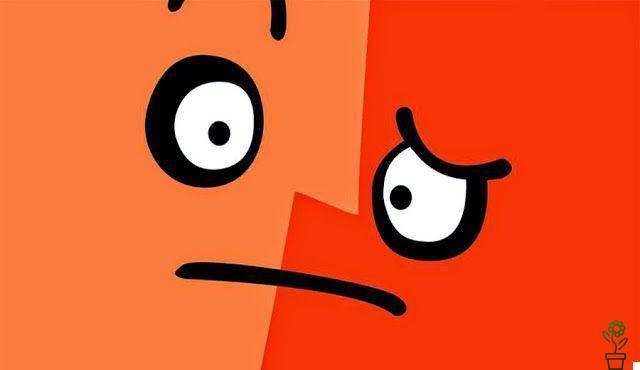 There are times when fear or anger makes us completely blind and they make us take actions that we would not want. In those moments, we can miss harsh words that hurt others and we can commit reprehensible acts that are difficult to justify. We overreact, without thinking, we lose control of the situation and of ourselves. In these cases, a real "emotional hijacking" occurs during the decision-making process.

What is meant by emotional abduction?

All, to a greater or lesser extent, rarely or often, have been victims of the "emotional abduction". It is the moment when we stop thinking, we get carried away by feelings and, after the critical phase, we do not remember very well what we did or why.

When we are victims of an emotional outburst, the center of the limbic system declares a sort of "state of emergency" and uses all the resources of the brain to carry out its functions. This seizure occurs within seconds and creates an immediate reaction in the prefrontal cortex, the area associated with reflection, so that we do not have time to assess what is happening and make a rational decision.

Obviously, not all emotional abductions have a negative connotation. For example, when we are victims of an uncontrollable bout of laughter or feel euphoric, the amygdala also takes over and prevents us from thinking. In fact, it's not the first time (and it won't be the last) that someone has done something stupid out of euphoria, promising things they can't keep or regret.

The amygdala: Seat of the passions and sentinel of the brain

Emotional sequestration is generated in the amygdala, which is one of the most important structures in the limbic system, where emotions are processed. In fact, the amygdala specializes in the processing of emotional stimuli and is linked to the learning process and memory. It has been found that when the amygdala becomes disconnected from the rest of the brain we are unable to give emotional meaning to situations. For example, we can see our partner, but we don't feel any emotion. In practice, the amygdala is a kind of emotional memory reservoir.


Either way, the amygdala plays a key role in the passions. When this structure is damaged, people do not experience feelings of anger and fear. These people are not even able to mourn.

At this point one might ask: if the amygdala works perfectly, why are we so easily overwhelmed by passions?

The problem is that the amygdala also plays the role of a sentinel for our brain, and one of its functions is to examine perceptions for a threat. The amygdala analyzes each situation by asking itself: Is it something I hate? Can it hurt me? It scares me? If the answer to any of these questions is yes, the amygdala reacts immediately by activating all resources and sends an emergency message to the rest of the brain. These messages, in turn, trigger the secretion of a series of hormones that prepare us for the fungus or for combat.

At that moment the muscles contract, the senses are sharpened and we are in a state of alert. The memory system is also activated to try to recover all the information that may be useful to avoid the risk. Thus, when it comes to a danger, the amygdala takes control of almost our entire mind, even the rational part.

Of course, in our brains, everything is set up to give the amygdala green light, because when we're in danger, everything else doesn't matter. Therefore, the amygdala is the first brain station through which the signals from our senses pass, only after this first evaluation are they sent to the prefrontal cortex. This is why emotions sometimes overtake us and take control.

A failure in the activation of the rational mind

To implement an emotional seizure, it is not enough that the amygdala is activated, it is also necessary that there is a failure in the activation of the cortical processes that are responsible for balancing our emotional responses. In fact, it is normal that when the rational mind is overloaded by the emotional mind, the prefrontal cortex is activated to help manage emotions and to evaluate possible solutions.

An obsolete neuronal system of vigilance

One of the main problems with this neural warning system is that in the world we live in now, where there are not so often serious life-threatening dangers, it is almost never necessary for the amygdala to seize the rest of the brain. Especially if we consider that when the amygdala is activated it realizes very coarse associations, using even small parts of past experiences. So, if a person has developed an unconscious fear of the sound of firecrackers going off, any such sound can trigger an emotional seizure.

In fact, the poor precision of our emotional brain becomes even more pronounced when we consider that many of our memories come from childhood, when structures such as the amygdala and hippocampus were not yet fully mature and stored information with an excessive emotional charge. .

In this regard, we should not be surprised if some of our most intense emotional reactions are incomprehensible even to us, since they may depend on an experience lived in childhood, when our world was still too chaotic and we had not yet acquired language. During that time, each experience may have been registered by an immature amygdala as a trauma, which can later be reactivated in similar situations.

Can emotional abduction be avoided?

There are some situations in which it is practically impossible to avoid an emotional hijacking. However, this does not mean that we must resign ourselves to being passive victims of our emotions. On the contrary, we can train our brain to learn to discriminate between signals that represent real danger and those that are harmless.

Especially by becoming aware that most situations in everyday life can be stressful or troubling, but they almost never pose any real danger. Therefore, there is no need to be tense or angry.

On the other hand, it is also necessary to practice detachment, in the Buddhist sense of the term, because the more things we consider our property and part of our "I" the more we will have a tendency to overreact when we perceive the danger of losing them.

add a comment of Emotional Seizure: What happens in our brains when we lose control