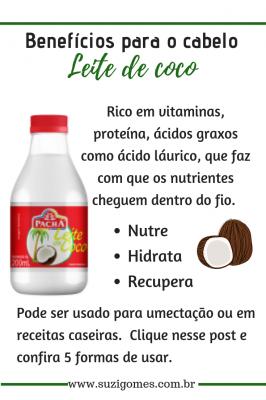 Coconut milk is a plant-based drink obtained by squeezing the pulp of coconut.

It is easily found on the market, but you have to pay attention: coconut milk is very different from coconut water, which is the liquid contained in the coconut, and has very different nutritional properties.

It also often happens that al packaged coconut milk has added sugar: read the label carefully before buying it.

Coconut milk is an excellent substitute for milk of animal origin: allowed in the food choices of Vegetarians e vegans, it has no milk proteins that they can initiate intolerances, is devoid of cholesterol and gluten.

It is therefore also suitable for those who follow a low-fat diet and for celiac. Furthermore, coconut milk is a food rich in various nutrients.

Coconut milk is a decent source of vegetable proteins; mainly used by Sports it is a particularly drink caloric which provides energy readily available in a short time.


It is also interesting to observe how the coexistence Of these trace elements within the coconut milk allow the absorption and assimilation of each other. From this point of view, coconut milk is a complete and very useful food for the well-being of the organism.

Coconut milk is known as supplement, not only caloric, by sportsmen, especially from chi practices strengthening and anaerobic activities.

Here are the direct benefits of coconut milk:

Coconut milk and other milk substitutes

Coconut milk lends itself well to be used in sweet and savory recipes. Particularly renowned in Asian and Oriental recipes, and in South American recipes, coconut milk can also be adapted to Mediterranean recipes.

In sweet recipes, coconut milk can be used instead of any other vegetable milk: unlike soy milk, whose flavor is particularly strong, and rice milk, which is often too liquid and poor in flavor and texture, milk coconut also brings an extra aroma that will be pleasantly released in recipes.

Preparation: the agar agar is dissolved in the warm coconut milk. It is heated and the seaweed is completely dissolved. Add the sugar and stir over low heat for a few minutes, until the mixture begins to thicken. It is then poured into molds and left to cool. Once cold, it is left to rest in the fridge for at least two hours.

This basic preparation can be used as it is by adding fruit jam, hot or cold, or melted chocolate to the pudding. Or you can add other ingredients during cooking: berries or dark chocolate. It is a very simple and very versatile preparation: experiment with coconut milk pudding in the variants you prefer!

Coconut milk can be used for prepare salty sauces to accompany sautéed vegetables or rice. The preparation is simple, like that of a vegetable béchamel.

Preparation: it melts corn starch in a little coconut milk and it thickens. You can add some cinnamon or of turmeric or, if you prefer stronger flavors, del masala or the spicy curry.

The sauce thus ready can be used to sauté vegetables in a pan, to cream rice or stew tofu or seitan.

The taste of coconut milk will give a more Asian note and will enhance the spice of the prepared dish.

Learn about the cosmetic uses of coconut milk

How to make coconut cream

Milk and coconut water, the differences

Vegetable drinks, which ones to choose

add a comment of Coconut milk: benefits and recipes