Carob flour instead of cocoa 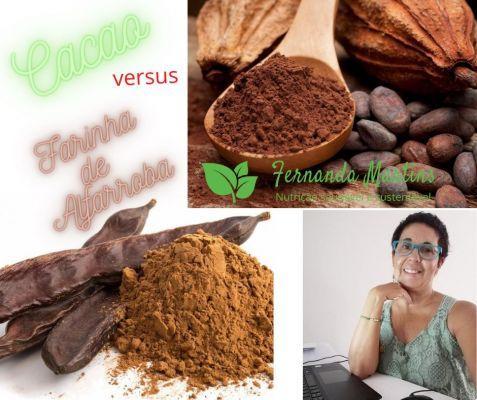 La carob flour it is a truly excellent cocoa substitute that nothing makes you regret the enveloping and delicious taste of chocolate.

Many people need or want to choose aalternative to cocoa: this is because maybe they are on a diet or have discovered that they have an intolerance or allergy to cocoa or because they have liver problems or indigestion and they could even be people who have irritable bowel syndrome where eating cocoa just doesn't help.

La carob flour is a fantastic alternative to cocoa both for flavor and for its nutritional values. In fact it is rich in nutrients and does not contain caffeine which is instead present together with theobromine in cocoa.

These substances have a nerve action that stimulates the nervous system as happens for coffee and can lead to insomnia, irritability and nervousness in the long run.

La carob flour it is obtained from the pod of the Ceratonia siliqua plant which belongs to the legume family. The fruit is a legume that contains pulp and seeds.

This pod can be eaten fresh by eating the pulp but it is usually dried and then reduced to flour to be then sold as carob flour.

Its composition sees the presence of soluble sugars and many carbohydrates as well as a good part of insoluble fiber.

La presence of lipids and therefore of fats it is poor and does not contain cholesterol which is usually co-present in the preparation of chocolate because there are ingredients of animal origin such as butter and milk in the classic recipe.

Carob flour is also very rich in mineral salts such as iron, magnesium, potassium and calcium. A quantity of 100 g of carob pulp covers the daily requirement with 30% iron and 45% calcium.

It also contains many vitamins such as vitamin A, indispensable for visual function, for the immune system since it develops the maturation of T cells, for the regulation of lipid, protein and carbohydrate metabolism, and finally for the nervous system and the brain since it is involved in the functioning of the process of both spatial and relational memory.

Contains a a good part of B vitamins, in particular B1, B2 and B3 which are instead useful for the nervous system, for the liver, for the metabolism of lipids and proteins and finally for the transformation of glucose. Finally it contains the vitamin D which, on the other hand, is essential for the mineralization process of teeth and bones as well as being essential for growth and for the regulation of metabolism of some minerals such as calcium and phosphorus which are simultaneously present in carob flour and thus we obtain a perfect synergy of action for the best functioning of our body.


How to use carob flour

The use of carob pulp flour it is very easy because it can replace cocoa powder for all recipes in the same quantities. Only the flavor of the carob is sweeter than the bitter cocoa powder and therefore this is the only warning to take into account but otherwise the replacement is easy and easy.

Carob flour in addition to giving a sweet flavor it is also capable of giving a creamy consistency like cocoa because it is a natural thickener useful in various recipes such as creams, jams, sauces and other condiments.

Inside the carob flour there are various fibers with thickening properties and in particular pectin which is the substance that is added precisely to obtain the right consistency in jams and fruit jams.

We can use carob flour in association with honey, fruit, yogurt but also in tastier and salty recipes such as rice, tagliatelle, dough for bread and fresh pasta.

Obviously it is used for biscuit and cake recipes where it is widely used not only behind home stoves but also in the pastry industry.

Carob flour is also excellent for making drinks perhaps mixed with milk and honey or combined with vegetable milks of rice, soy or oats.

Its sweet taste allows it to also be a sugar substitute in fact, carob flour is used to make "non-sweet desserts" which usually include natural sweeteners such as molasses, agave, stevia or cereal malts in their recipes, thus replacing sugar and even honey.


Being naturally sweet, carob flour is an essential ingredient for these recipes of “non-sweet desserts”.

Carob flour is suitable for those with sugar problems such as diabetics since the presence of carbohydrates increases the blood sugar like all carbohydrates but these carob sugars are slower release and better distributed which does not cause immediate sugar problems.

Carob flour also for celiacs it can be used, if it is not mixed with other ingredients that contain wheat or derivatives of it.

In addition, carob flour is chosen by those who have digestion problems because it does not irritate the intestine and does not even lead to overheating or inflammation problems, as sometimes happens with cocoa in people more prone to intestinal problems.

Carob flour is also a hypocholesterolizer and it is even a probiotic because it helps the intestinal flora by reducing swelling problems.

It also has antitoxic properties because the carob pulp is able to absorb waste substances and free toxins helping their elimination.

Its composition is rich in antioxidants  which counteract free radicals and therefore help keep us younger.

Another advantage is that carob flour gives a prolonged sense of satiety and therefore we will feel the need to eat only after a long time, thus also helping those who are attentive to the figure.

Audio Video Carob flour instead of cocoa
Foods for diabetics: what they are and when to take them ❯

add a comment of Carob flour instead of cocoa