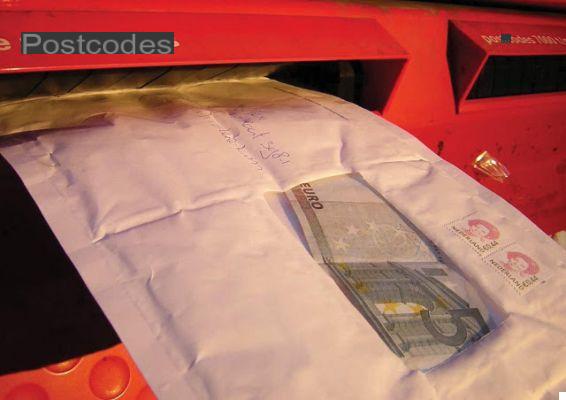 We do not behave in the same way if we are in a church or a nightclub. The reason for these behavioral differences lies not only in the environmental differences but also in the arrangement of objects in these places. Or at least, this is what some Dutch social psychologists say: environments where disorder prevails ensure that people do not submit to norms but rather represent an incitement to transgress them.

The idea itself is not entirely new, it can also be found in Zimbardo, the distinguished professor at Stanford University. On one occasion Zimbardo placed two identical cars, without plates, one of these in a street in the Bronx (a slum area of ​​New York) and the other in Palo Alto, California. It probably goes without saying that in less than ten minutes the car located in the Bronx was besieged by vandals who soon transformed it into a playstation for children, while the one placed in Palo Alto remained intact for a week. Of course, up to this point there is nothing out of the ordinary about what happened, but later Zimbardo himself broke a window of the car parked in Palo Alto. Within hours this same car was reduced in the same way as the one in the Bronx. It is pointed out that some of the vandals appeared to be absolutely ordinary and respectable people. This experiment represented the missing link to coin the definition of "broken window theory". This theory arose from the empirical observation of industrial buildings: if one window broke and was not repaired immediately, in a short time the rest of the windows ended up running the same risk. In this way, a broken window turned into an incitement to break the rest as well. It is worth clarifying that this theory has had profound implications in the fight against crime. The best known example is that of Rudolf Giuliani, who was successful in reducing the crime rate of the city of New York starting from the measures put in place against the smallest acts of vandalism. Today, new research enriches this theory, further confirming that the order or disorder of the surrounding environment can affect our behaviors in a different way. Keizer and his team moved to a commercial area in Groningen. The experiment was very simple: an envelope was placed in the slot of a letterbox with a five-euro banknote in it clearly visible through a film, so that passers-by could see it well (the image is what from the beginning of the article). 13% of the people who passed by stole the package. Later, the researchers decided to give a touch of disorder and abandonment to the environment: they painted the entire mailbox with particularly ugly graffiti. Result? In this case, 27% of the people who passed by stole the package from which the five-euro banknote was clearly visible. However, it was not only the graffiti that incited unethical behavior, it was enough, at first, to deposit some rubbish on the sidewalk near the hole for 25% of passers-by to steal the package. Identical results were obtained with a series of subsequent experiments. In one of these, advertising flags were applied to bicycles bearing the inscription: “We wish you a nice holiday”. Unsuspecting participants had to take them off to be able to ride their bikes again. In phase A, the walls in front of the parking lot where the bikes were located were totally clean and bearing a no graffiti sign. In phase B, there was the same sign but the walls of the parking lot were covered with graffiti and various drawings. There was no garbage container in the vicinity, and this implied that to respect social norms, people had to carry the flag with them so as not to throw it on the ground. What happened? In phase A only 33% of the people threw the flag on the ground while in phase B as many as 69% of the people did not make the effort to throw the advertising flag on the ground. 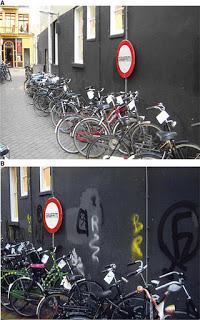 However, the researchers wished to go further and prove whether people were still capable of violating legal or privately made prohibitions. In this regard, they created a very clear prohibition sign that prohibited the entry and parking of bicycles, and placed it in good view at the entrance. In any case, the parking door was deliberately left open about 60 cm. The alternative entrance was 200 meters away. Once again the disorder marked the fundamental difference: when people did not see any bicycles inside the parking lot only 27% of them dared to go through the door; but when there were already bicycles inside (because obviously someone had already broken the imposed rule) as many as 82% of people had no qualms about entering and parking their bikes. 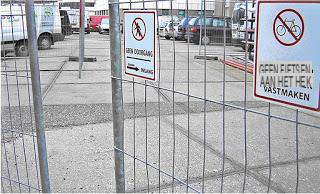 The researchers conclude that the disorder incites to have unethical behaviors, unacceptable not only from a social point of view but also prohibited by law. In particular, in addition to the disorder factor, I believe that the awareness that someone before us has broken the law makes us more willing to break it too. How to say, we are not alone, someone has already done it before me, why not me? Beyond the possible hypotheses that explain it, it is certain that these experiments make it clear to those who are in charge of creating laws and enforcing the order that: if you take care of the surrounding environmental details it will be easier for others to respect the prohibitions and the rules imposed.

Thorndike and the 3 Laws of Learning ❯

add a comment of Broken window theory; order or disorder?