Avoiding Injuries in the Gym: Chest and Triceps 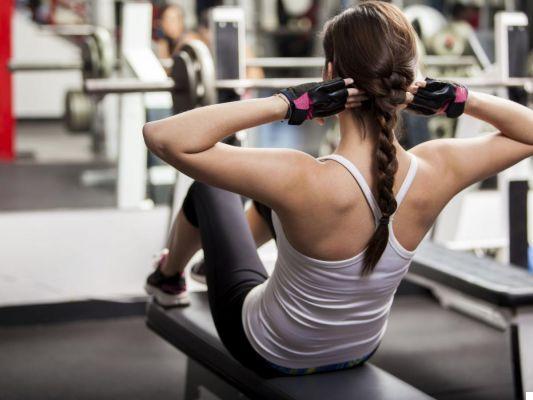 Barbell presses on the flat bench or inclined bench

The back can to be arched, to shift the effort mainly on the triceps and central or low bundles of the pectoralis major. It is a common practice in pure strength disciplines, because it allows you to increase loads a lot. In the past it was thought it could be risky, but today it is consolidated that the (healthy) spine does not suffer anything.

To learn more: How to stretch the pectoral muscle

Crosses on flat or inclined bench

A wide range of motion is required to properly perform crossovers on a flat or incline bench.

However, the complete eccentric phase places a great deal of stress on the shoulder joint, so that you are required to use loads suited to your possibilities. Therefore, be careful not to misunderstand: it is important that the eccentric phase is taken to the bottom, but it is also important that pain does not occur and do it with suitable loads, descending slowly, not letting the weights "fall" and then abruptly contract (the so-called pre- somatotropic-stimulating stretch is left only to advanced practitioners). Take care to reach the end of the stroke with extreme gradualness as the muscles strengthen and the tendons of the subscapularis, pectoral major and anterior deltoid become flexible. The negative phase must have an amplitude proportional to the degree of training.


Nothing to report particularly for Crosses and Pushes to the Cables and for Croci alla Pectoral Machine.

Dip at Parallel or Push

Also called pushes or presses on the ground, require a movement with the hands in an extended position with respect to the forearm, so avoid exacerbating the tension on the wrists as occurs by placing the angle between humerus and torso less than 90 °.


Pull Over with Handlebar or Barbell

The dumbbell or barbell pull-over movement, especially its barbell version, forces the retroposition of the humerus, so it is contraindicated for those with a history of dislocations or congenitally loose rotator cuffs.

To avoid a dislocation or a wear trauma, which can be an inflammation due to the pressure of the humeral head on the tendons and ligaments, the eccentric part is brought to the maximum excursion only if the load is suitable and only if the subject has developed a good musculature. We could say more clearly here, as for the crosses and the parallel thrusts, that the eccentric phase must be increased gradually over the weeks, in proportion to one's muscular development and flexibility. The beginner avoids the point of maximum descent until he is sturdy and flexible enough. It is known, and applies to all exercises, that large loads are potentially harmful even in correct execution, as they place significant stress on tendons, ligaments and capsules. This is why even in powerlifting it goes down to 1-3 repetitions only in the pre-competition, since the shorter the period of maximum stress, the lower the risk of developing injuries.

There are two delicate points at risk of trauma to consider in this exercise:

See point 2 of the previous exercise, also for what concerns its variant with the string.

Also known as EZ Barbell Forearm Extension on Bench. The two points mentioned in the extensions to the lat machine are valid, and to these I add:

Correct execution is often distorted by making it hybrid with pull overs. Practically the unwary helps in lifting the barbell by assisting with the powerful sagittal extensors of the humerus. Therefore, in addition to the extension of the forearms, it is accompanied by an impetus given by the extension of the humeri. This condition allows you to use more load, but also to proportionally increase the risk of injury to points 1 and 2 mentioned in the extension to the lat machine.

Nothing to add onExtension of the Forearms Above the Neck with Dumbbells.

Push-ups between the benches

The delicate points are always the same at the wrist and elbow. Since in this case the wrists are forced to stay extended, the risk of injury in these areas is more sensitive than in other triceps exercises. In fact, in the other cases it was possible to gloss over the problem by improving the executive form; here the only precaution lies in "listening to one's body", in moving with concentration, slowness and control.

Another point at risk is the shoulder joint, for the same reasons mentioned in the parallel thrusts: the retroposition of the humerus poses, in the complete descent phase, a luxating stimulus clearly contraindicated in those with a history of dislocation, rotator cuff lax. Even for those with healthy shoulders, this movement must be performed with extreme caution, making the amplitude of the descending phase proportional to the degree of training (practically it must be accentuated as you train). Penalty for the unwary: the risk of inflammation.

For the wrist joint, see the same observation made for the lat machine execution.

add a comment of Avoiding Injuries in the Gym: Chest and Triceps