Arame: properties, use and contraindications

Arame seaweed it is an excellent ally to combat disorders related to metabolism and al malfunction of the thyroid gland, and it is useful against male impotence. Let's find out better.

> 1. Description of the seaweed

> 2. Ownership and use of the Arame seaweed

> 4. Contraindications of the Arame seaweed 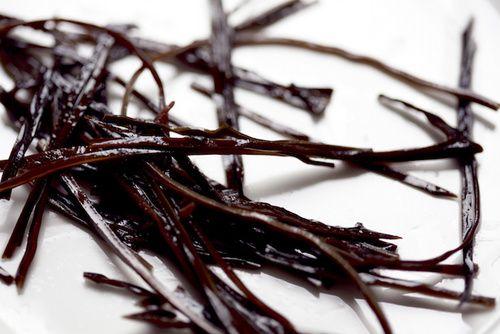 Description of the seaweed

Arame seaweed, scientifically known as Eisenia bicyclis, is a type of brown alga that comes collection in Japan, in Peru and the northern Pacific coast.

It has quite large leaves, up to 30 centimeters long, which are cut into thin strips, cooked and dried in the sun.

Properties and use of the Arame seaweed

Algae, and likewise Arame, contain up to twenty times more concentration of elements than terrestrial plants. Among their mineral components there are calcium, copper, iron, magnesium, potassium and zinc; they are also rich in vitamins.

The arame algae are particularly rich in beta-carotene, a powerful antioxidant, as well as significant amounts of iodine. Arame can be used in different ways, both in the cosmetic field and in the kitchen.

Among the algae from the East, the'Arame is the most pleasing to the western palate, as it is more delicate, sweeter and less strong than other algae; it is ideal accompanied with tofu, tempeh or seitan and with vegetables, also in combination with a vinegar and shoyu sauce.

In herbal medicine, arame is considered one of the best adaptogens, that is, they can help correct some ailments in the body.

Arame is hypotensive and can help reduce high blood pressure. Its iodine content regulates thyroid and metabolic activity. In the past it was used as a remedy to treat ailments of the female reproductive organs.

Contraindications of the Arame seaweed

Given the iodine content, the brown alga Arame is contraindicated in case of hyperthyroidism however, it should be taken with caution even in cases of presumed altered functionality of the thyroid.

Arame seaweed is rich in iodine: discover all its properties

add a comment of Arame: properties, use and contraindications