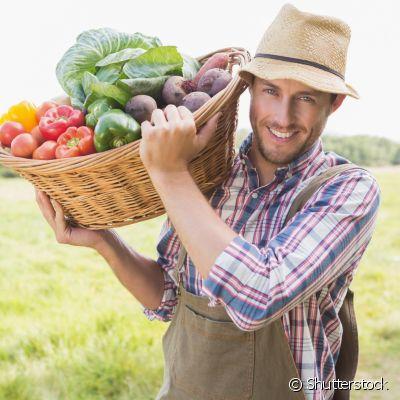 "Organic is a scam" or "Buying organic is the habit of those who can afford it".

We have heard phrases like this many times, spoken in a reductionist and somewhat bored tone. From false beliefs we move to the sideboard as a piece of furniture, the one it hosts the food we eat.

Beyond commonplaces, in fact, we like to be on the side of those who peek well between studies and research focused on nutritional qualities of organic products, the mechanisms that determine this certainty of this quality and study purchasing behavior in depth. Like Biobank, an on-line laboratory in constant updating, to which data and information on the places where to buy bio in the country flow year after year through direct censuses.

Quality organic foods subject to certification have positive aspects that affect human health and that of the planet. Let's take a closer look at three of these multiple aspects;

Organic foods are rich in antioxidants useful for human health, from lycopene in tomatoes to resveratrol in red wines. Plants grown according to biological principles that exclude chemical substances produce greater quantities of these substances that neutralize free radicals and protect the body from their negative action: free radicals, in fact, are responsible for cellular aging, weaken the immune system, favoring the onset of numerous diseases).


2. The body thanks. Air and water as well

Organic foods are natural, healthy, free of toxic residues. Favoring an agriculture that does not use synthetic chemicals means limiting the presence of these substances in the air, in the aquifers, in the sea, and preventing them from passing through our taps.

To save the air from sulfur dioxide, benzene and fine dust, it is useful to choose to eat foods a Minimal environmental impact , foods found in short supply chains, biological or produced in biodynamic farms (those with a lower environmental impact). The habit of buying organic through Solidarity Purchase Groups is becoming more and more widespread, the so-called GAS, interesting realities to be discovered.

3. Respect for the earth

Buying organic allows you to increase investments for a type of agriculture that respects the soil fertility and biodiversity. We are experiencing seasons distorted by extreme climate change: in the face of these obvious upheavals for which we are responsible, organic crops are proving to be more resistant and also more profitable. For example, this year organic wheat crops have achieved better results both quantitatively and qualitatively (protein content) in many areas.

Alternatively, organic farmers use a number of techniques that contribute to maintenance of ecosystems and reduce pollution.


Buy organic and be sure of it

We remind you that the foods we are talking about are those with guaranteed organic certification. The label juxtaposed on the same foods is proof of this control and must necessarily include the following items: "From organic farming", "EEC control regime", the code of the producer, various ministerial authorizations and the brand of the body certification. there are several: BIOS, CODEX, AIAB, ECOCERT el Paese, QC&I, IMC (Mediterranean Institute of Certification), Soil and Health, CCPB (Consortium for the Control of Organic Products), Bioagricert. Finally, for the autonomous province of Bolzano alone, the certification body BIOZERT, a German body, was recognized.

Organic farming in the country, growth in contrast

> Organic shopping, how and where to do it

> Organic farming and its advantages

> Differences between organic and biodynamic agriculture

add a comment of 3 good reasons to buy organic