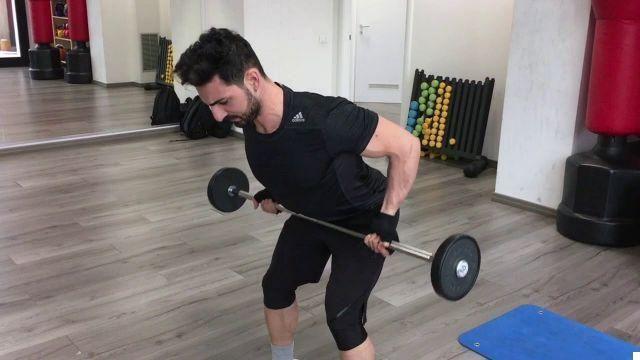 The starting position sees the athlete standing with his back in his position of strength, but with the shoulder blades abducted; the hips are flexed to form a variable angle depending on the area where you want to concentrate the effort. The knees are semi-flexed and the distance between the feet is equal to or slightly greater than that between the shoulders. The hands grip the barbell with a prone grip at a distance greater than that between the shoulders. Depending on the degree of flexion of the hips, the barbell can be found just below or just above the knees, but in any case in contact with the legs. The execution consists in adding and elevating the shoulder blades, extending first, and extending the shoulders both in the transverse and sagittal planes and at the same time flexing the elbows, then. The execution ends when the bar comes in contact with the torso. The most efficient movement is the one that draws a segment of a straight line, so the bar is in contact with the body only at the beginning and at the end. The degrees of flexion of the hips and knees should remain the same for the duration of the exercise, however it is possible to partially extend the knees and / or hips during the concentric phase of the movement as a cheating technique. In any case, the back must always remain in its position of strength. The more the hips are flexed, the wider the range of motion of shoulder extension, elbow flexion and scapular adduction; vice versa with the hips slightly flexed and therefore an almost vertical bust, the main action becomes the scapular elevation. This variant focuses more effort on the transverse shoulder extensors at the expense of the sagittal ones, as the grip widens and the torso tilts forward. At the flexion level of the elbow, the prone grip favors the brachioradialis and the brachialis.

add a comment of Rows with prone grip barbell