Overview of the low-sodium diet

Sodium is a particularly abundant mineral in the Western nutritional style; for this reason, unlike other minerals (such as iron, calcium, potassium, magnesium, etc.), in the vast majority of cases it creates complications due to an EXCESSIVE dietary intake (while a dietary deficiency is rather rare).

Excess sodium in the diet is related to the onset of arterial hypertension (AI).

The low-sodium diet involves the consumption of foods FREE of added salt (NaCl), avoiding salty ones during industrial or home processing. 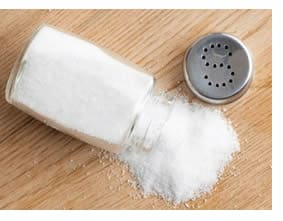 Of course, the low-sodium diet also excludes all sodium-containing additive molecules, such as sodium glutamate and sodium bicarbonate.
In addition to limiting sodium intake compared to Western dietary habits, the low-sodium diet acts on the complications induced by excess sodium through other aspects of a chemical-nutritional nature. From the studies concerning the blood pressure regulation of the human organism it emerged that, in addition to the regulatory nervous center, also the vascular tone (vasodilation or peripheral vasoconstriction) and the relationship between excretion / reabsorption of the nephrons play an essential role in the onset of hypertension. arterial. Therefore, taking into consideration that both arterial compliance and renal function are mechanisms strongly influenced by some nutritional molecules, the low-sodium diet is structured by intervening not only on sodium but on many aspects of the overall diet.
The low-sodium diet is a nutritional therapy aimed at containing the levels of arterial hypertension (defined as such when the minimum pressure is permanently higher than 90mmHg and the maximum one always exceeds 140mmHg). This metabolic pathology, which proportionally increases the cardiovascular risk, can be induced or favored by some etiological or predisposing elements; among them there are subjective and objective ones. On the other hand, what all types of arterial hypertension have in common is the ANOMALOUS and non-physiological alteration of the mechanism in question.

Primary hypertension is mainly caused by:

In subjects suffering from hypertension it is possible to intervene on several fronts: diet (low sodium), supplements (see below), level of physical activity (increasing it) and use of drugs (diuretics, vasodilators, etc., also in combination with each other).

Arterial hypertension can determine and more often contribute to the onset of unfortunate events such as ischemic heart disease and cerebral vascular syndrome, with the risk of death or permanent disability; what makes it an extremely dangerous metabolic pathology is the absence of significant symptoms until the diagnosis of the first admirable clinical signs or the first complications.


NB. Hypertension exponentially increases its harmful effects when it is associated with type 2 diabetes mellitus, dyslipidemias, obesity and visceral deposition (therefore also with metabolic syndrome, of which it represents a constituent element).

Sodium is the main cation of extracellular fluids. Its metabolic function is essential and any defect would certainly prove harmful to the body. However, as anticipated, in Western diets sodium is typically taken in excess, which is why in the presence of hypertension it is necessary to reduce it through a low-sodium diet.
The main functions of sodium are to regulate the extracellular volume, the osmotic pressure of the extracellular fluids, the acid-base balance, the electrophysiological phenomena of the nervous and muscular tissues, the nervous impulse, etc.
During the renal passage almost all sodium is reabsorbed and its retention-excretion is modulated by the action of the hormone aldosterone. The ability to excrete sodium with urine does NOT exceed 0,5-10% and the only compulsory losses of the body are with faeces and urine (about 7%).
The excess of dietary sodium causes an increase in the osmotic pressure of the extracellular fluids and the consequent recall of intracellular fluids, with an increase in the volume of the former compared to the latter. "Perhaps" it is for this reason that the chronic increase in dietary sodium is directly related to the onset of arterial hypertension.
In the low-sodium diet, sodium is reduced through 2 essential measures:

PLEASE NOTE: fresh and unprocessed foods "rarely" contain high concentrations of sodium, with the exception of bivalve molluscs, which are however poorer in the mineral than cold cuts, cheeses, salted or pickled foods, snacks, fried foods, etc.

In the course of the article it has already been mentioned that the low-sodium diet is NOT simply based on the abolition of discretionary salt and food products that contain added sodium; in particular, the low-sodium diet FOR THE HEALTHY SUBJECT (which does not have primary renal or other impairments) guarantees:

In addition, the low-sodium diet is to be STRICTLY associated with:

Having already listed which are the key nutritional principles of the low-sodium diet, the practical "commandments" to be able to implement it will be explained below:

Supplements to be associated with the low-sodium diet

The supplements useful in the case of a low-sodium diet are those that meet the nutritional needs NOT achieved through the diet itself. Generally, with a good level of physical activity, the caloric expenditure is high enough to allow the achievement of the recommended rations through the consumption of food alone; on the other hand, there are not rare cases of a low-sodium diet for very elderly, bedridden, infirm, obese, sedentary subjects, etc., who need such a restriction that they do not always guarantee all the nutrients in adequate quantities. In this case, supplements of:

In addition, a good hypotensive action was highlighted against:

The low-sodium diet is always effective in reducing blood pressure, but the extent of the improvements that can be obtained depends very much on the pathological nature and the underlying causes.
In secondary hypertension, the low-sodium diet subordinates the treatment of primary diseases and assumes a marginal or even optional role. For the primary forms, however, it is more incisive; when hypertension is mainly caused by overweight, the most important nutritional aspect is that of conferring a negative caloric balance and promoting weight loss. On the contrary, when the overweight is moderate and a diet rich in salty foods is highlighted, the low-sodium diet is decisive. Finally, if there is a suspicion of a strong genetic and hereditary component, the low-sodium diet is important but acts as a complement / preventive agent to be inevitably associated with drug therapy.


Audio Video Low-sodium diet
Lightning Diet: What does it consist of? ❯