Agar agar: the vegetable gelatin from algae. Ownership, uses and where to find it

THEagar it's a gelling agent of natural origin, also known in Japan as sides, and derived from red algae. It is a polysaccharide with a high content of mucilage and carrageenan capable of transform liquids into jelly, a feature that makes it particularly useful in the kitchen. Agar agar is used as a gelling agent as an excellent substitute for jellies of animal origin.

in culinary preparations agar agar acts primarily as athickener and gelling agent. It is considered a suitable food for those who wish to keep their body weight under control, as it does not require the addition of sugars in the preparation of jellies or in order to thicken jams and marmalades.

Agar agar are attributed laxative and purifying properties. It is able to contribute to the processes of elimination of toxins put in place by the body. In Japan agar agar has been used for centuries mainly because of the slimming properties attributed to it, so much so that in the Land of the Rising Sun a diet based on foods prepared with the use of this gelling seaweed extract.

In the East it is considered a valid help to fight diabetes and to encourage the intestinal regularity. The laxative properties of the agar agar and in part its ability to promote weight loss appease the sense of hunger in case of excessive appetite. It is also considered an adjuvant suitable for improving constipation situations. As for his nutritional content, the agar agar has calcium, iron and vitamins of groups A, B, C, E and K, with a reduced caloric intake. And naturally gluten-free.

How to use it

The flavor of agar agar can be defined as neutral, a feature that makes it suitable for preparation of both sweet and savory dishes. It can be found on sale in three different forms: in powder, flakes or flakes, and in threads.

The flakes and threads of agar agar are obtained simply by extraction from algae. They represent the most natural version of agar agar, but at the same time the least gelling. It will therefore be necessary to use a greater quantity than the powder version, for which a further processing process is carried out, which contributes to making its gelling power more effective. The powdered agar agar is however completely natural and vegetable, but it is more concentrated. 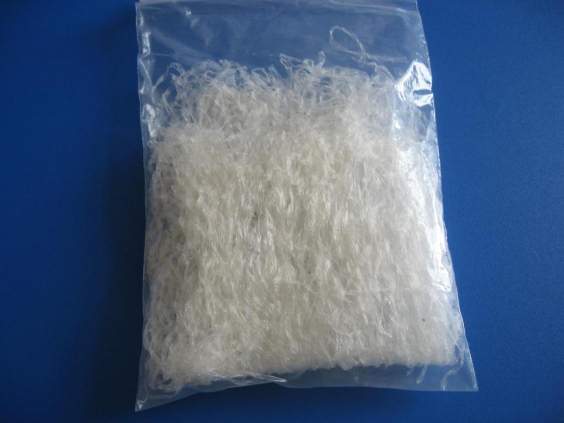 The use of agar agar it does not change according to its shape. It will have to be paid within boiling liquids (such as water, fruit juices, vegetable milk for the homemade preparation of puddings and vegan "cheeses" or jams in progress) and left to cook, stirring for a couple of minutes. The agar agar gels at a temperature between i 35 and 40 degrees. Therefore the appearance of the gelatine will occur when the liquid is placed back to cool and has almost reached room temperature.

In case agar agar is used for the preparation of jellies for pies, the liquid obtained must be poured over the fruit even before it solidifies completely. The jelly will complete its formation later. Puddings, aspic, tarts and other preparations to be consumed cold in which agar agar has been used can be transferred to the refrigerator to obtain dishes with a very solid consistency. Plan to use 2 teaspoons of powdered agar agar for each liter of liquid and, depending on whether it is in powder, threads or flakes, adjust the precise quantities according to the instructions on the packaging. As for the flaked agar agar, 3 to 4 teaspoons per liter are usually sufficient.

It is good to remember that un teaspoon of powdered agar agar corresponds to 6 gelatine sheets common and that this dose is suitable for gelling 500 milliliters of liquid or 500 grams of jam. To prepare a jelly for tarts, it will be sufficient to dissolve a teaspoon of powdered agar agar in 500 milliliters of organic apple juice, mix and bring to the boil, let it cook for a couple of minutes and pour over the fruit before the jelly is completely cooled and solidified.

Where to find it

Agar agar can be found for sale in most herbalists and product stores natural and organic. It is also available in numerous online store in its different versions. You can therefore identify it under the name of agar agar in powder, flakes and threads. Less common is its version in bars. Other outlets where agar agar can be found are the stores that include products of oriental origin or suitable for those who follow a macrobiotic diet.

Audio Video Agar agar: the vegetable gelatin from algae. Ownership, uses and where to find it
Lamb for Easter: the call of the meteorologist that we should all listen to (VIDEO) ❯

add a comment of Agar agar: the vegetable gelatin from algae. Ownership, uses and where to find it