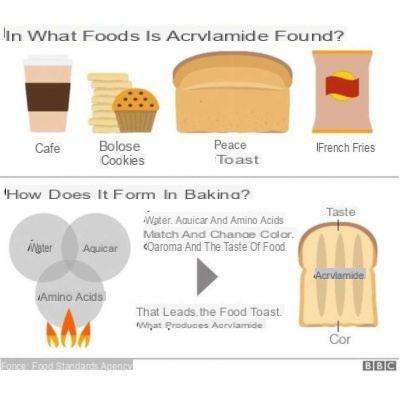 As the EU regulation we are examining specifies, theacrylamide is a contaminant  - according to the definition of Regulation (EEC) no. 315/93 of the Council (2) - and, as such, constitutes a chemical danger in the food chain.

It is a organic compound low molecular weight, highly soluble in water, which is formed starting from the constituents asparagine and sugars naturally present in certain foods prepared at temperatures normally above 120 ° C and with a low degree of humidity.

In fact we find acrylamide in all those foods rich in carbohydrates, baked or fried; the Ministry of Health had at the time issued a document indicating "The risk assessment" explained by EFSA. Now also Il Fatto Alimentare comes to our aid, which, going deeper into the subject, also tells us how to behave at the level of home cooking, in order to avoid the risk of acrylamide.

Where is the acrylamide and what are the risks

In short, it is always about moderation and attention towards what you eat, quality and quantity.

Acrylamide is mainly formed in baked or fried foods rich in carbohydrates, consisting of raw materials that contain its precursors, such as cereals, potatoes and coffee beans.

But acrylamide is also present in tobacco smoke, a non-food source that can also affect passively. And, in this regard, the test of the Salvagente on potato chips caused a scandal in Europe, do you remember?

For operators and consumers, the respective levels to be respected are also explained here, which are levels made lower than those of the old reference.

For example, crisps made from fresh potatoes and from potato paste, potato crackers, other potato paste products should not exceed 750mcg / kg.

Read also Junk food, why it hurts and how to replace it >>

What are the health risks

The health risks associated with the consumption of acrylamide, as indicated in the press release in question, they would be linked to studies carried out by the competent authorities of EFSA and the Contam group, which deals with contaminants in the food chain. Based on these animal studies, acrylamide may increase the risk of developing cancer for consumers in all age groups.

Children, due to their body weight, constitute the most exposed age group.

We refer to the EU Regulation 2021/2158 of the Commission of 20 November 2021, which establishes mitigation measures and reference levels for the reduction of the presence of acrylamide in food.

It is issued to protect the consumer regarding the safety of food, so that there are the necessary conditions for suitability for human consumption: for operators it means greater controls and binding limits to be respected, for the consumer more safety and protection for their health.

Indeed, the legislation in question explains that the acrylamide content can be reduced applying good practices and precise procedures by food sector operators, also in relation to the food processing stages, during which this substance could be formed. Sampling, analysis and official controls will be carried out in order to comply with the new legislation which will come into force starting from 11 April 2021.