Peppers belong to the nightshade family and they are a typically summer vegetable. Thanks to the cultivation in greenhouses they are found all year round, but July and August are the best months to eat them.

In fact, peppers, like all solanaceae, contain solanine, a substance that, if taken in large quantities, can be even toxic. Sun-grown peppers, however, produce much less than off-season peppers, one more reason to take advantage of the summer months to eat them.

Peppers help replenish the fluids lost through sweating because they are mainly composed of water. They are rich in saliminerals, in particular potassium and magnesium.

They have four times the vitamin C of citrus fruits and are a good source of vitamin A. They are diuretics and provide an excellent amount of dietary fiber. Finally, they are low in calories compared to an excellent satiety index. 100 g of peppers provide just over 20 calories.

Peppers, which ones to choose?

There are many different types of peppers, but the more colorful ones are preferable.

The yellow and red peppers they contain less solanine than the green ones.

Furthermore, red peppers are richer in vitamin A and antioxidants than those of other colors.

Read also Peppers and other solanaceae >>

Peppers, how to eat them

Peppers can also be eaten raw, in salads, of course we are talking about very tender ones. In this case, all the vitamin C is fully absorbed which, being very volatile, tends to disperse with cooking.

Some people have a hard time digesting them; the main cause is the cellulose present on the peel depriving them of it result therefore much more digestible. Furthermore, the summer ones are more digestible than greenhouse ones due to the lower presence of solanine.

And here are a couple of recipes.

I rice-stuffed Peppers they are a dish that can also be prepared the day before, so they are perfect when we spend a day out, perhaps by the sea and, back home, we want to find the meal ready.

Boil the rice, which must remain very al dente. Separately, in a non-stick pan, cook the onion cut into very thin pieces in a little extra virgin olive oil and, when it is almost cooked, add the diced tomatoes.

Wash the peppers, cut the cap and remove the seeds and internal filaments. Pour the rice into the pan containing the onion and tomatoes, add a handful of pepper to the sauce and season with salt.

Fill the peppers, cover them with their cap, finish with a drizzle of olive oil and bake in the oven at 180 degrees for about 45 minutes. 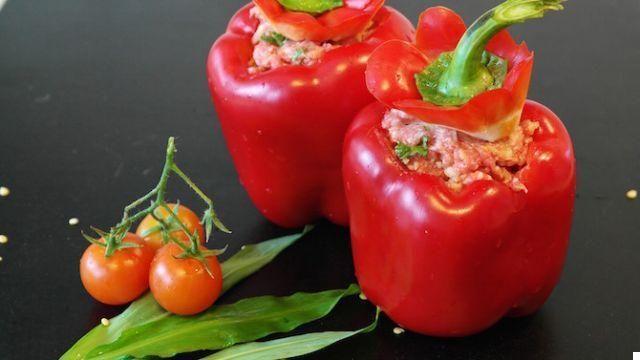 I cheese au gratin peppers they are a very practical and simple side dish.

Wash the peppers, cut them in half lengthwise and remove seeds and internal filaments. Cut the smoked cheese into cubes, divide it into eight parts and distribute it over the 8 halves of peppers.

Then add a few capers and a tablespoon of breadcrumbs for each half of pepper. Drizzle with extra virgin olive oil and bake in the oven at 180 degrees for about 30/35 minutes.

If the surface tends to darken too much and the peppers are not yet cooked, cover with a sheet of baking paper and cook. Those who prefer it can add salt, but the cheese and breadcrumbs already contain some, so this is a dish that you can not even salt. It depends on the tastes. 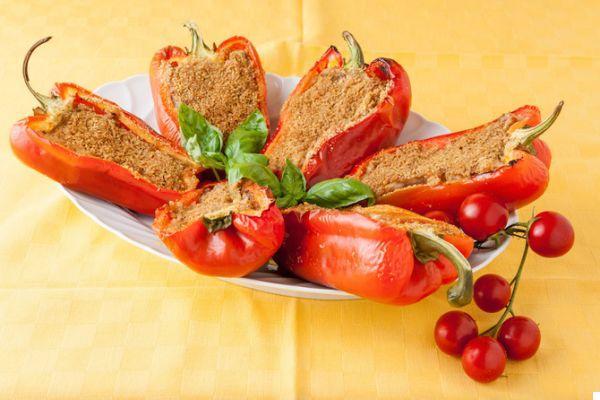 > Find out more about peppers: properties, benefits and other recipes

Audio Video Top vegetable for August: peppers
Anti-cholesterol supplements, what they are and when to take them ❯

add a comment of Top vegetable for August: peppers