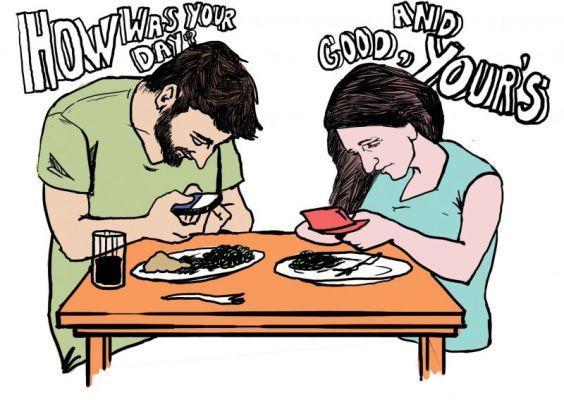 People are constantly on social media to see what their friends have posted and what they have done in their "life". The profiles, however, do not always describe the true reality in which the individual lives. Some people show a completely different image of themselves on social media by showing off cars, houses, and items they don't own. People who look at the feeds of these fake individuals tend to confront them, risking being sad because they may feel that they are not as "successful" as the person showing off all their material possessions.

In addition, people tend to constantly post material on Facebook, Instagram, and Snapchat, as well as other social networks, eagerly waiting for responses and likes, in order to feel part of the whole network and not feel left out. When an individual posts a photo or video and it doesn't get as many likes, comments, or shares as expected, he begins to feel left out and that's where social media addiction arises. Usually, in the face of a lack of engagement, people look for ways to get more followers and more likes, so they can feel fulfilled in the world of social media.


Despite all the satisfactions that can be received in social networks, the compulsive use of them runs the risk of reducing the ability to communicate in person, undermining the social capacity necessary to relate to other individuals off the screen.

This is where the most relevant problems arise. When people are so used to talking on social media or instant messaging apps, they fear human interaction and can essentially develop social anxiety.

On the other hand, if social media is used to learn new concepts or promote something positive like education or social and environmental activism, it can only lead to positive results (and not mental disorders).

With the rise in popularity of social media, "Scrolling" has become the national pastime of the younger generation. But this affects the mind of all people, regardless of age.

So let's see why mental chaos is one of the main psychological effects of social media.

Imagine scrolling through your Facebook page and you come across a nutrition video.

You watch the 3-minute video, learn about the different foods that are bad for your body, and think you'll stick with it when you turn 30.

Then scroll down again and find another video, this time about flooding in an Asian country.


You see houses collapsing, vehicles washed away, people stranded in remote places. He is worried about the people who suffer from floods. For a moment you could think about making a donation. But before you do that, scroll down a bit.

And you start watching a video tutorial on small DIY gifts.

You are shown many mini-tutorials on simple and beautiful gifts that you can make with your own hands. You feel gratified to see them. You might also think you could try making one yourself and get excited. But in the meantime, scroll through your feed a bit more...

… And you come across a piece of news from Ansa that talks about the latest government decree. You think about it for a while and then keep scrolling...

But are our minds capable of processing all these random feelings at the same time? I do not think so. Once your mind sees something, it needs time to process it, time to digest it. A mind cannot process things that are disconnected from each other at the same time.


When you eat, you can also eat many different foods and your stomach can digest them all together, but the mind doesn't work that way, as far as we know.

This is why after closing the Facebook app, there is no core sentiment that you carry with you. End the experience with a disturbed mind.

On the other hand, when you read books, like a novel, your mind is occupied with the subject of the book. There may be a lot of information, but the topic is the same. Your mind is occupied with only one thing. You can process it as a whole. So when you close your book, you come away with a different feeling depending on how you react to the book. There is a certain direction in your thoughts and your feelings.

But in the case of social networks, you come out with a chaotic, disorganized, disturbed mind. It no longer has a single focal point.

You will not donate to the victims of the flood, you will make handmade objects with them, they will just annoy you.

This is why many of us today have a very low attention span. One cannot concentrate. Much information is assimilated but direction is lacking. Furthermore, one becomes addicted to this mental chaos. Your mind ends up looking for something new every moment. He cannot be satisfied. He cannot remain in peace.

So when you close this article and move on to the next one, or return to our Instagram (or Facebook) page, remember that your mind is not used to these sudden and chaotic changes.

Let him settle and digest what he just assimilated.

Having said that, we hope we have illustrated in sufficient depth the two main psychological effects of social networks, and we invite you to read the other Fervida Inspiración articles on the subject of Psychology:

The behavior of the man in love - Psychology ❯

Psychology: not responding to messages, meaning and motivations

The psychological benefits of sport

How to increase immunity and get sick less

Attraction method 3 6 9: how to make your wishes come true

When a narcissist collapses: from pain to anger

add a comment of Psychological effects of social networks